X-ray analysis and CT images of the embalmed woman show signs of nasopharyngeal cancer, which researchers hope will now provide new clues to the evolution of this disease. 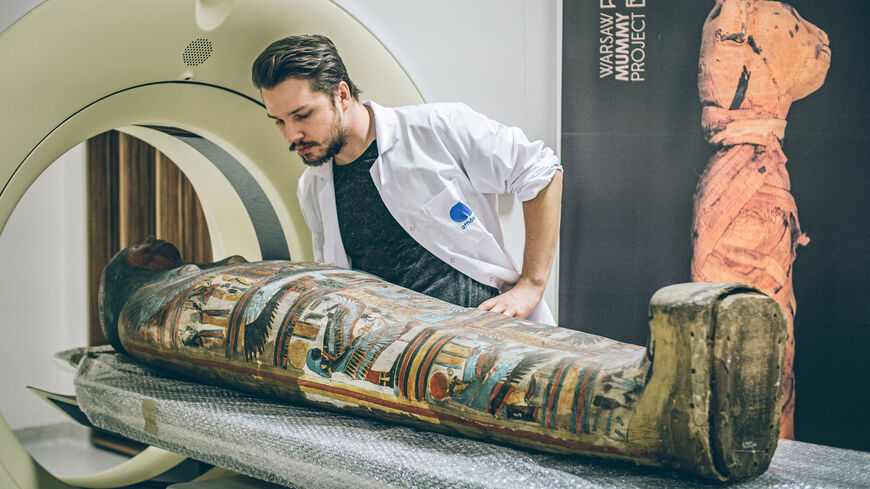 The mummy of a pregnant woman from ancient Egypt is prepared for a CT scan, Affidea clinic, Otwock, Poland, 2015. - Warsaw Mummy Project

The Polish team of scientists investigating the first known mummy of a pregnant woman from ancient Egypt announced that, following the latest analysis of her skull, they discovered that the embalmed woman most probably died of cancer. The team, which is part of the Warsaw Mummy Project, hopes that, if confirmed, their discovery will help to better understand this disease and its evolution over the last millennia.

In the results of their latest study, the Polish team detailed that the pregnant mummy was X-rayed and CT scanned during a radiological examination of a number of Egyptian mummies. The analysis of the data obtained in this process then revealed anomalies in her craniofacial bones, similar to those caused by a nasopharyngeal cancer, which originates in the area of the nose and the throat. Further CT images of the bone behind her left eye orbit also revealed features that may be identified as the presence of a small tumor, which the group of scientists have identified as a possible metastatic site.

“I was preparing her for a 3D printing. In order to do this, the object must be closed and I had to fill the parts that are open in a normal human skull,” Stanisław Szilke, member of the team who first noted the anomalies, told Al-Monitor. “When I was filling the gaps, I noticed that there were some spaces that should be closed in a normal skull but were missing here. And I asked the team to look for other anomalies."

The pregnant mummy, also known as the "mysterious lady" because of the enigmas that have surrounded its history, dates from the first century B.C. It is believed to belong to a woman of the elite of Thebes in southern Egypt, although it is still not known who she was. In fact, the little that is known with certainty is that the mummy and its coffin were bought in Egypt by the Polish architect Jan Wezyk-Rudzki and donated to the University of Warsaw in 1826. But the story beyond this date remains shrouded in mystery.

Its place of origin remains uncertain, because although Wezyk-Rudzki linked it to Thebes, it is not ruled out that this was a false attribution to increase the value of the mummy when sold. Also, recent examinations have found that the coffin belongs to a different person than the mummy, which could have been placed there due to an initial mistake or due to the randomness of the 19th-century antiquities dealers who sold it. It was not until 2016 that researchers were certain that the mummy didn’t belong to a priest but a woman.

The latest surprise in the study of the mummy came in April 2021, when researchers from the Warsaw Mummy Project discovered, thanks to radiological analysis, that the embalmed woman was also pregnant, the first known case of its kind.

“First, we thought she might have died of some pregnancy-related complication, because it was very common in ancient times for women to die during the third trimester of pregnancy from complications of different kinds. This is why [the latest finding] was surprising,” Marzena Ozarek-Szilke, co-director of the Warsaw Mummy Project, told Al-Monitor.

Previously, the Polish researchers had already been able to determine that the "mysterious lady" had died at age 20-30, and that at the time of her death she was 26-30 weeks pregnant. Now, the scientists have been able to go even further and have observed that the anomalies in her bones may be the result of a tumor, which in this case probably led to her death, the team said.

The researchers believe that the discovery is important because the type of cancer they have detected is “vastly more common” in certain regions of East Asia and Africa than in other parts of the world, as evidenced by the fact that migrants from these regions who live elsewhere suffer from this disease more often than others. According to the scientists, this pattern suggests a “strong genetic predisposition."

Since the pregnant woman lived in a different environment than today and was not exposed to either cigarette smoke or strong alcohol, as ancient Egyptians consumed only beer and wine, the team believes their analysis may provide new insight into this type of cancer.

“[We could] check what cancers in the past looked like and compare it with modern ones,” Ozarek-Szilke said. “And we planned a bigger program to check if cancers changed or not [compared to today], and if they did, in which parts of the DNA,” she added.

Fortunately for the researchers, the mummy also presents fragments of potentially cancerous soft tissues in the area where the bone is bearing marks of potential cancer. By sampling them, along with mummified internal organs and further analyses, such as genetic and molecular tests, the team hopes to be able to confirm that she did have cancer and thus help to better understand this disease.

“We have a very good situation here because we have a mummified body and we have tissue, so we can take small samples and check what kind of tumor it was,” Ozarek-Szilke said. “We can also do genetic analysis and molecular analysis, and compare these with current tumors and cancers.”

Wojciech Ejsmond, the other co-director of the project, told Al-Monitor, “This has the potential of being groundbreaking research, but we are still in the initial phase."