For the first time in Egypt’s Luxor, prominent archaeologist Zahi Hawass performed a CT scan on the mummy of a young child with the hope of discovering the identity. 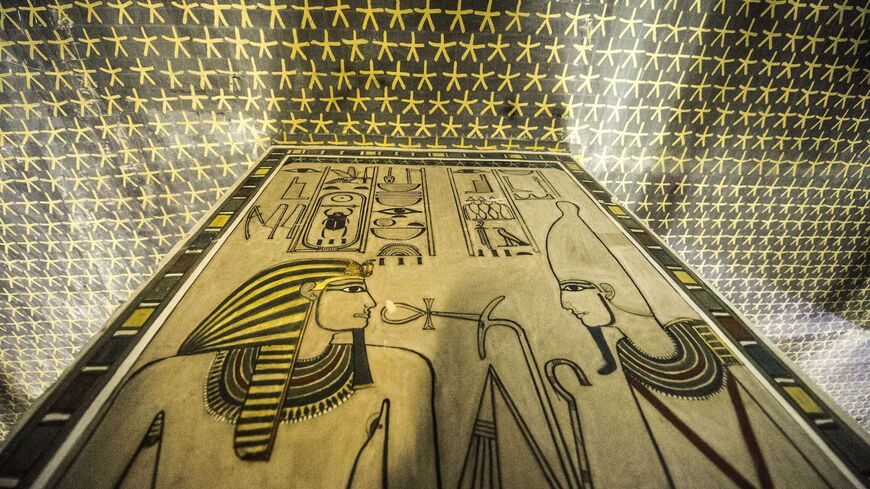 A picture taken on Sept. 29, 2015, shows a wall relief inside the Amenhotep II tomb at the Valley of the Kings, close to Luxor and south of Cairo, Egypt. - KHALED DESOUKI/AFP via Getty Images

CAIRO — In an unprecedented step, prominent archaeologist and former Egyptian Minister of Antiquities Zahi Hawass performed last month a CT scan and took DNA samples from a mummy belonging to a child who was brought from Tomb KV35 of King Amenhotep II in the Valley of the Kings.

The procedure, which was performed inside Luxor’s Shefaa el-Orman Oncology Hospital dedicated to the free treatment of children with cancer, aimed to identify the mummy and the causes of death and diseases that could have affected the body. This comes within the context of the Egyptian Ministry of Tourism and Antiquities project aimed at identifying unknown Pharaonic mummies found in Luxor or elsewhere in Egypt.

Hawass told Al-Monitor that he was inside the corridors of the hospital, which is equipped with modern devices and laboratories, to perform the CT scan and take the DNA sample and then compare those results to other samples of the family in a bid to detect the degree of kinship, if any.

Three mummies lay in the Amenhotep II Tomb KV35. One of them was identified as Queen Tiye, the grandmother of Tutankhamun. During the April 2021 royal parade during which 22 mummies were transferred from the Egyptian Museum in Tahrir Square to the National Museum of Egyptian Civilization in Fustat, the queen’s mummy, nicknamed the Great Lady, had dazzled the world with the beauty of her hair.

The mummy lying next to her belonged to Amenhotep II’s mother, nicknamed the Little Lady. Between the two was the small mummy of the unknown child.

The results of the tests aren't expected until July.

“There are many unidentified mummies of the family of Queen Nefertiti in the Egyptian museum, so samples are being taken and CT scans performed in an attempt to identify mummies and compare the results to the known members of the family, as part of the project to search for the mummy of Queen Nefertiti, which would be a huge global archaeological discovery,” Hawass said.

As part of this national project, the mummy of King Seqenenre Tao was also X-rayed and identified in February 2021, which revealed the story and struggle of the ruler of Thebes — which is currently Luxor — and one of the kings of the 17th Dynasty who faced off with the Hyksos.

Sahar Selim, a professor of radiology at the Faculty of Medicine at Cairo University who supervised the CT scan of King Seqenenre Tao’s mummy, said in press statements back then that the X-ray revealed the king’s death was caused by a blow to the head and face and fatal injuries — something not mentioned in history books.

The CT scan results of King Seqenenre Tao’s mummy were also compared to the findings of a study on the nature of the Hyksos weapons and the harm they could cause, which revealed a great similarity with the nature of the king’s wounds. This shows the extent of his struggle and sense of patriotism in fighting the Hyksos, Selim added.

Hawass said, “The project to identify mummies in Luxor and around Egypt seeks to unveil everything that can be known about these mummies, through medical technologies.”

The Valley of the Kings is located on the west bank of the Nile River in the ancient funerary city of Thebes, currently Luxor. The valley is divided into two parts — the eastern and the western valley — where kings of the 18th, 19th and 20th dynasties of the era of the modern state were buried.

The eastern valley is the most prominent, as it is home to many tombs belonging to kings, including the tomb of Tutankhamun, which was discovered in 1922. Egypt is gearing up to celebrate the centenary of this major discovery.

The eastern part of the valley also includes the tomb of Ramses II, which is one of the largest in the Valley of the Kings, in addition to the tombs of Amenhotep II, Ramses IV and Seti I.

Fikri Hassan, a professor of archaeology at the University of London in Egypt and director of cultural heritage at the French University of Egypt, praised the project, stressing that these efforts will help reveal the identity of many unknown mummies in Egypt, their lineage and other valuable information such as the causes of death.

Speaking to Al-Monitor, he thanked Hawass for applying scientific studies and technologies such as CT scans and DNA analysis to identify unknown mummies.

The examination also showed a fracture in the skull and back. Other tests and analyses are ongoing to prepare a comprehensive report to be submitted to Hawass and the project’s committee in the coming weeks, Gad said.

Fikri explained to Al-Monitor, “The idea of the project is to conduct an accurate CT scan of the mummy, and then analyze its DNA, to compare the results with those of the identified members of the same family. These tests should be performed meticulously and samples drawn very carefully to avoid any external factors that could alter the results. It is important to make sure that the material being analyzed belongs to the mummy in question. The DNA can be extracted from the teeth, with no need for the skeleton. Also, the CT scan can go through the [layers] wrapping the mummy.”

“But the people in charge must transport the mummies in a scientific manner without exposing them to any damage, air or impurities,” he added, saying that this technique of identifying mummies is common in many European countries, the United States and others.