The pillaging from the Gaza Strip of thousands of historical artifacts, some dating back to the time of Alexander the Great, at the hands of the Israeli occupation has stripped Gaza of its rich history, writes Asmaa al-Ghoul. 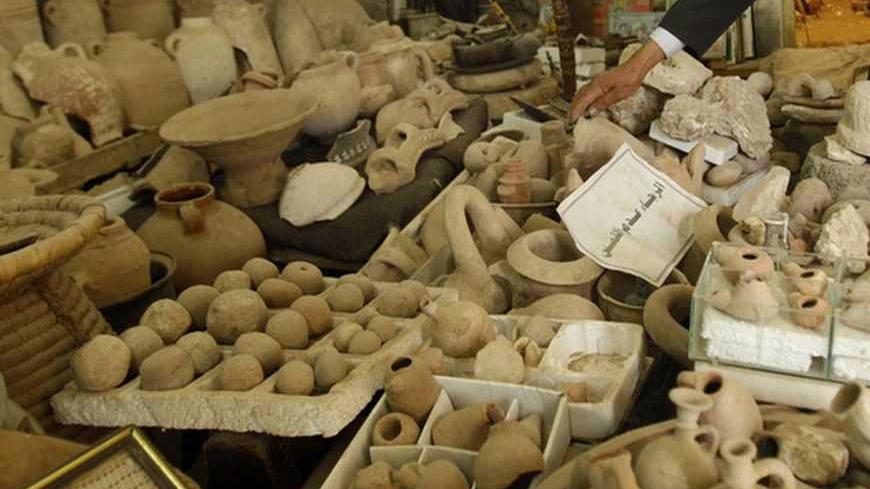 Palestinian amateur archaeologist Waleed Al-Aqqad touches a clay jar from his collection of ancient artifacts at his house, which he was turned into a museum, in Khan Younis in the southern Gaza Strip April 3, 2011. - REUTERS/Ibraheem Abu Mustafa

Moshe Dayan is the former Israeli defense minister who, using the strength of the Israeli army, pillaged countless artifacts — dating from the Ottoman era to the time before Christ — from Gaza, in an effort to erase Palestinian history.

Once we entered the archeological sites in the Gaza Strip, we noted the full consequences of this pillaging. Gaza is devoid of its archaeological content; only floors and destroyed walls remain there. This was obvious when Al-Monitor visited St. Hilarion monastery, considered one of the most important in the Middle East. St. Hilarion was the disciple of St. Anthony the Great, the father of monasticism.

The monastery is an archaeological mound in the middle of the Gaza Strip, with a mosaic floor dating back to the Byzantine era and parts of an ancient monument, a basilica-style church with three corridors and the tomb of St. Hilarion, which was a pilgrimage destination.

Fadel al-Otol, a supervisor of the site from the French Institute for Archaeology, said that the Israeli occupation had robbed the entire site. The people of the region testify that the occupation moved everything to Israel in 1993, before the Palestinian Authority was established. While walking around the site, he explained that it consisted of 245 rooms, a private marble sarcophagus for the saint — of which only a small part still exists — and Corinthian marble columns.

A history of robberies

According to the Institute for Palestine Studies — in a study entitled “Looting and Salvaging the Heritage of Palestine” — there are 12,216 archaeological sites in Palestine, thousands of which were destroyed and looted because of the occupation.

Salim Mubayed, a researcher of Palestinian heritage, told Al-Monitor in a meeting in his office: “Gaza is considered a open-air museum for the world’s civilizations. In this city heathens, then Christians and Muslims developed and enriched the city with antiquities. Gaza was called a treasure, but the excavation of its antiquities was not consistent with its historical significance. Its antiquities were not properly excavated, and the biggest part was hidden.”

It is to be noted that the first scientific research in Gaza was conducted in 1931 by British archaeologist Flinders Petrie, who discovered many building foundations and pieces of gold jewelry in the Sheikh Ajleen neighborhood of the city of Gaza.

He explained that under the British Mandate, there was little awareness of the value of antiquities, which were traded. There was only one museum, called the Palestine Archaeological Museum, now the Rockefeller Museum in east Jerusalem. He noted that under Egyptian administration, attention was paid to all aspects of life except for Palestinian antiquities and heritage, which were unknown in Gaza.

Mubayed added that Israel entered and occupied Gaza for few months in 1956, and the first thing that was done was to steal antiquities. After 1967, these robberies became a policy adopted by the occupation. The most prominent antiquities were stolen by Dayan, who took thousands of pieces, including four Pharaonic clay coffins from ​​Deir al-Balah in the Gaza Strip.

He added, “I remember that a picture of these clay coffins was published in Time Magazine, and Dayan was standing among them in the picture. Today, these coffins are in the new Jerusalem Museum, after the museum purchased them from Dayan’s wife.” He explained that Dayan stole thousands of artifacts from Rafah, Deir al-Balah, Sheikh Ajleen and the Sinai desert.

Mobayed explained that from 1967 until late 1993 there was a lack of awareness of the national and historical value of these antiquities, and added that Dayan used to walk in the alleys of Gaza to buy artifacts from citizens.

Mobayed added, "Hebrew universities also carried out excavations at the archaeological sites and moved several Pharaonic, Canaanite and Byzantine items of jewelry and crockery to Israel, pictures of which were published in National Geographic — of which I still keep an issue. This systematic looting is the biggest loss regarding Gaza’s antiquities.”

The head of Alexander the Great

The study, which was published by the Palestinian Studies Foundation in 2008, indicates that there are 184 archaeological sites in Gaza. The majority of these sites have been subject to illegal excavation by citizens trying to make a living. This occurs in the absence of any national laws to protect antiquities, as well as weak public and official interest in preserving these sites. These sites are also plagued by legal grey areas regarding antiquities in Israel and the West Bank, as well as Israel's construction of military camps, walls, settlements and guard towers.

Despite an increased collective consciousness regarding the importance of antiquities, there are still those who deal in them. The spokesman for the police in the Gaza-led government, Ayman al-Batniji, told Al-Monitor during an interview that in the past few years the police had detained four people who were trying to smuggle antiquities out of the Strip or from Egypt into Gaza with the goal of bringing them into Israel. However, he denied the existence of organized tourist robberies.

He pointed out that the most recently detained smuggler was arrested at the Rafah border crossing between the Gaza Strip and Egypt, and was in possession of a statue of the head of Alexander the Great that was 30 cm in length and made of alabaster. The statue dated back thousands of years and was estimated to be worth millions of dollars.

Batniji said that about a month ago, four antique columns were found by chance when police officers were diving near the northern shores of the Gaza Strip. They were later restored by the Ministry of Antiquities.

The Ministry of Antiquities

The occupation and environmental factors are not the only reasons behind the destruction of these antiquities. Gaza's residents also neglect archaeological sites and convert them into garbage dumps or deface them with cement and new stones.

Hayam al-Bitar, an official in the research department at the Gazan Ministry of Antiquities, told Al-Monitor during a meeting at the ministry's small headquarters attached to the Ministry of Agriculture that the ministry is prevented from interfering in these historic homes because they are private property. Thus, the ministry must compensate their owners before they take control of these sites to carry out restoration. He clarified that there is coordination between the ministry and the municipality of Gaza to ensure that any citizen who owns an old home cannot be issued a building permit without the ministry's approval. There is, however, a problem with citizens building without a permit.

Although the first museum in the Gaza Strip was private, it was quickly followed by the establishment of a public museum in the Pasha's palace three years ago. Bitar notes that although this museum is small, it came about as the result of great efforts on the part of ministry staff.

Regarding the budgets set by the two governments in Gaza and the West Bank, most of the money is spent on security, without much concern for preserving Palestinian history or its many archaeological sites. On the other hand, Israel is creating its own history, on stolen treasures.