St. Hilarion Monastery, named after the first monk in Palestine, gets international funding for a project that would enable its restoration in a two-year-long project. 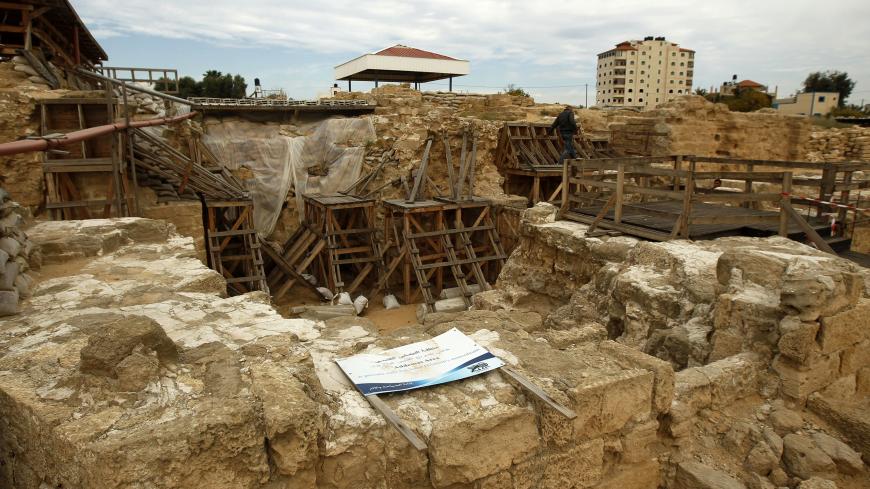 A worker walks on scaffolding at the archaeological site of the St. Hilarion Monastery, one of the largest Christian monasteries in the Middle East, central Gaza Strip, March 19, 2013. - MOHAMMED ABED/AFP/Getty Images

The project, which started in January and is expected to take up to two years, is supervised and funded by the British Council's Cultural Protection Fund. Partners of the project include French nongovernmental organization Premiere Urgence Internationale (PUI) as well as the University of Palestine, the Islamic University of Gaza and the French Biblical and Archaeological School in Jerusalem. The project also includes the restoration of a Byzantine church in Jabaliya in the Gaza Strip.

The monastery’s founding text, which was discovered in excavations supervised by the Palestinian Authority in 1994, reveals that the St. Hilarion Monastery was the first Christian landmark in Palestine. It dates back to Hilarion, the founder of Palestinian monasticism. According to Encyclopaedia Britannica, Hilarion was born in Tabatha, south of Gaza, in A.D. 291. He studied in Alexandria, where he became a Christian. He was a disciple of St. Anthony of Egypt and lived with him in the desert. Returning to Palestine in A.D. 306, he started a solitary life by erecting a hut in the wilderness some 7 miles from Maiuma, near Gaza, on the road to Egypt. After establishing the first Palestinian monastery in 329, which grew fast, Hilarion, seeking solitude, migrated first to Thebes, Egypt, and eventually settled and died in Cyprus.

Hiam al-Bitar, an archaeologist at the Ministry of Tourism and Antiquities, told Al-Monitor, “The monastery was built in Nuseirat, central Gaza, which was a deserted area over the hills back then. It included a church and a baptismal font.”

Today, all that remains are the stone walls, a few Corinthian columns and parts of a mosaic floor. “The church in the monastery was renovated three times during the fourth, fifth and sixth centuries as well as in the early seventh century under the Umayyad Caliphate,” Bitar said. “We can see all these renovations in the three mosaic floors, built on top of each other, spreading over an area of over 8 acres. The baptismal font is in the shape of a cross, and the churchyard is paved with marble. There are over 120 rooms to accommodate deacons and priests as well as visitors, a kitchen, a dining hall, a space to grind wheat and press grapes as well as a water fountain and fish spawning grounds.”

The budget for the restoration of the monastery and the Byzantine church is about 1.5 million euros ($1.85 million). The renovations will take two years, employing 75 workers, including international and local experts, archaeologists, academics, students and graduates of history departments in Palestinian universities in the Gaza Strip who will receive training on the restoration of monuments.

“We will use the money to complete 70% of renovation at this monastery and 90% of restoration works at the Byzantine church in Jabaliya. Both sites, however, need additional funding in the future to become fully qualified tourist destinations,” said Jehad Abu Hassan, PUI’s Gaza Strip field coordinator.

General Director of the Ministry of Tourism and Antiquities Jamal Abu Rida told Al-Monitor that archaeologists have only discovered 8 acres of the St. Hilarion Monastery so far, but excavations should soon uncover more. The ministry reached an agreement with Nuseirat municipality to prevent construction in the areas around the monastery by first getting approval from the ministry.

He pointed out that the Ministry of Tourism and Antiquities has already allocated new, farther lands to a citizen from Gaza in 2009 in exchange for his property near where the monastery was discovered.

Abu Rida noted that excavations to discover the monastery began in 1994 and continued sporadically, funded by several parties through UNESCO. "However, this was only emergency funding intended to save the archaeological site from completely being destroyed, and the Ministry of Tourism and Antiquities set up a fence around the site to prevent herders from taking their sheep there for grazing," he said.

He added, “The restoration aims to restore the work on the mosaic floors and the stones around Hilarion’s tomb as well as the church, parts of which were destroyed due to neglect and the earthquakes that hit the area in the seventh and eighth centuries. The stones that fell off the outer walls of the monastery were taken by the residents of the Gaza Strip who used them at that time to build their homes.”

The site of St. Hilarion had been one of the many archaeological treasures in Gaza that never received sufficient funding for restoration, but this newfound intention to restore monuments in the central province of the Gaza Strip is one positive aspect to be optimistic about.