In cooperation with Palestinian experts, a French antiquities mission found graves dating back to the Byzantine era at the site of St. Hilarion in the western Gaza Strip. 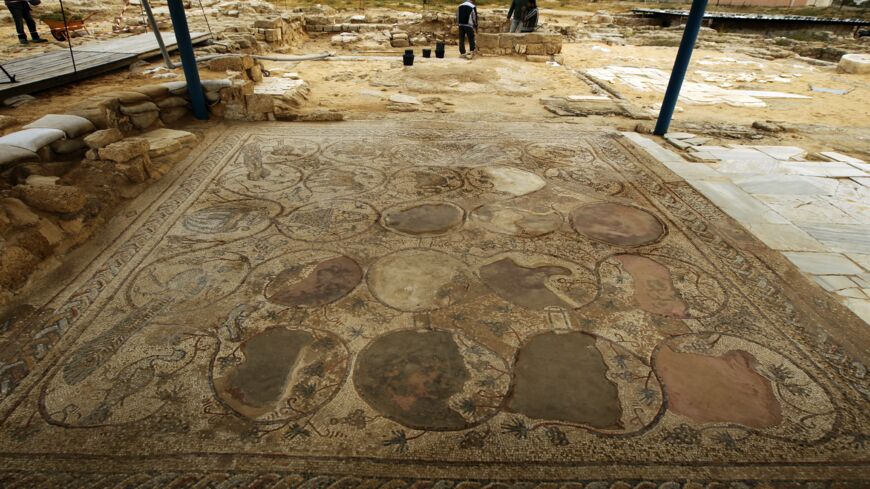 A large mosaic is pictured at the archaeological site of the St. Hilarion Monastery, one of the largest Christian monasteries in the Middle East, in Tell Umm al-Amr close to Deir al-Balah, in the central Gaza Strip, on March 19, 2013. The earliest building dates back to the fourth century and is attributed to St. Hilarion, a native of the Gaza region and the father of Palestinian monasticism. Abandoned after a seventh-century earthquake and uncovered by local archaeologists in 1999, today the settlement aspires to be a world heritage site but is in endanger due to the lack of funding. - MOHAMMED ABED/AFP via Getty Images

GAZA CITY, Gaza Strip — In cooperation with French antiquities experts, archaeology experts at the Palestinian Ministry of Tourism and Antiquities in the Gaza Strip found several Byzantine graves at the St. Hilarion Monastery archaeological site in the western Gaza Strip.

The discovery of the graves came as part of a new phase of excavation work carried out by a French mission at the monastery site in early 2021 to uncover more secrets and collectibles and to work on restoring and preserving the remains of the monuments inside.

The site of St. Hilarion was discovered by chance by some Palestinian workers who collect scrap in that area in 1990. When the Israeli Antiquities Authority learned about it, it took control of the place and conducted excavations for years, before the establishment of the Palestinian Authority (PA) in 1994.

The Palestinians accuse Israel of stealing nearly 60% of the site’s antiquities, including large marble columns and gold and copper utensils that were used by the monks, which were transferred to the Rockefeller Museum in Jerusalem. Meanwhile, all the efforts of the French missions excavating at the site and the PA failed to convince Israel to return the stolen items.

Historical information indicates that St. Hilarion, who was born circa A.D. 291 in the village of Tabatha, south of Gaza City, went to Egypt to study, converted to Christianity and became a student of St. Anthony. Upon his return to Gaza in A.D. 306, he took a secluded place of worship in an area locally known as Tell Umm Amer in the western Gaza Strip, and the construction of the monastery began in 329.

Rene Elter, a French archaeologist and director of restoration at the St. Hilarion site, told Al-Monitor that the three new graves discovered date back to the sixth century. He expects to discover more facilities and collectibles inside the monastery, whose area exceeds 15,000 square meters.

He pointed out that all the graves discovered took the east-west direction, and he believes the bones that were found inside the graves belonged to either the monks or the people who were visiting the place for worship.

Elter added that thanks to the donations made by many international institutions interested in preserving antiquities and heritage, work to uncover, restore and preserve the site’s antiquities is progressing well, noting that the site needs a lot of support in order to be preserved.

The St. Hilarion site, which is only dozens of meters from the beachfront in the central Gaza Strip, includes a church complex, many basements, a chapel, a bathhouse, bathtubs, the monks' residence, a courtyard and water well, and graves of many monks and pilgrims who used to make the pilgrimage to the monastery from all over the Middle East.

Since Palestine became a member of UNESCO in 2001, it has prepared a list of 20 Palestinian archaeological sites to register on the UNESCO preliminary list for inclusion on the World Heritage List, including the St. Hilarion Monastery.

Fadel al-Otel, a technical expert in the restoration and maintenance of monuments and one of the supervisors of the St. Hilarion site, told Al-Monitor that the discovered graves are undergoing studies, and some samples were taken from them to find out the identity of the figures who were buried inside.

He explained that many of the archaeological discoveries that are made from time to time at the site are preserved in their places after they are restored and covered with a layer of sand, while some parts are transferred to many museums in the Gaza Strip for public display.

Otel noted that over the years of excavation and restoration, the remains of nearly 70 people were found at the site, pointing out that dozens of Palestinian researchers and graduates of history and archaeology departments from Palestinian universities assist the French missions that excavate the site and preserve its antiquities.

Since 2018, many institutions interested in heritage and antiquities, foremost of which are the British Council and the Premiere Urgence International, under the supervision of the Department of Antiquities in Palestine and the French School of Biblical and Archaeological Research in Jerusalem, have allocated 1.5 million euros ($1.78 million) for the excavation and restoration works at the site and the preservation of antiquities within it.

For his part, the director-general of antiquities at the Palestinian Ministry of Tourism and Antiquities, Jamal Abu Raida, told Al-Monitor that the excavation work at the site needs more support and funds to uncover the remains of the antiquities inside, pointing out that parts of the site are yet to be discovered.

He said the graves are a small part of what is discovered at the site from time to time, stressing that the ministry's efforts are ongoing to preserve it and its antiquities in a manner that ensures the preservation of Palestinian history.

Abu Raida stressed that they are communicating with many international institutions, foremost among which is UNESCO, to provide financial and technical support as well as expertise in order to continue work in the monastery and to include it on the World Heritage List.