The lack of attention given by the government to monuments in the Gaza Strip coupled with the lack of awareness on the part of citizens are resulting in further neglect of an impressive collection that could put Palestine on the map. 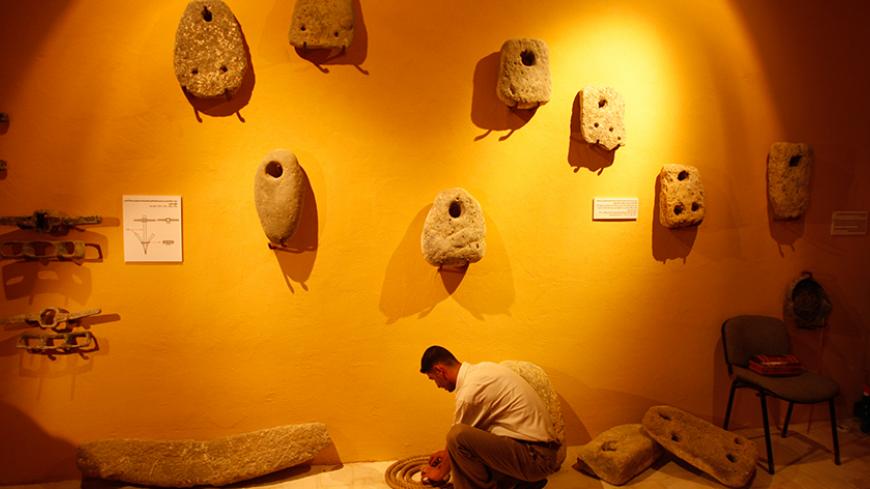 A Palestinian works in the Museum of Archaeology in the Gaza Strip, July 30, 2008. - REUTERS/Ibraheem Abu Mustafa

GAZA CITY, Gaza Strip — Gazans are turning a blind eye to scores of archaeological sites rife with artifacts and antiquities and to large marble and stone columns dating back to the Canaanite, Pharaonic, Byzantine, Roman and Islamic eras. Experts and researchers are now raising the alarm about the indifference of residents, resulting from a lack of societal awareness of the historical and economic value these antiquities carry.

The Gaza Strip is home to scores of discovered and undiscovered archaeological sites. Hayam Albetar, officer in charge of researches and studies at the Ministry of Tourism and Antiquities, told Al-Monitor, “Gaza is an archaeological site filled with cities, walls, fortresses and artifacts, and exploration operations are addressing no more than 1% of what is underground.”

On the northeastern border of Khan Yunis, south of the Gaza Strip, the al-Zana area is replete with archaeological sites. Akram Qaoud, who owns land there, found hundreds of broken pottery artifacts but never showed much interest in them. He told Al-Monitor, “This area was a city thousands of years ago. If I dig my land at different depths, I would find dozens of artifacts. At the end of the day, what would I do with the findings?”

Speaking of the importance of the al-Zana area, Albetar told Al-Monitor, “The northeastern area of Khan Yunis is known as ‘Maabar al-Hijrat’ [Passage of Immigration] because it was the gate to Gaza from the south — for the Canaanites, Persians, Romans and Muslims. There were also Byzantine villages in this area. If residents dug meters below their feet, they would find metal and pottery artifacts. These would be found close to the ground because the soil absorbs the water of the valley and is alluvial. Yet people here are not interested in these items, as they wouldn't know what to do with them, there are no museums that would take them and people can’t sell them because of the closure of border crossings and the blockade.”

Al-Monitor visited the area and witnessed that scores of antique columns are being used by residents at the entrance of their houses or as plant beds without knowing their true value. The majority of these, however, are still buried underground.

Saed ad-Din Asqoul, a Palestinian journalist and antiquities amateur, said, “This is insane. Treasures underground are left untouched, and treasures above ground are used as entrance decorations to houses. I know some people who amassed fortunes by selling artifacts or leasing them to international museums.”

Al-Monitor visited the Saint Hilarion Monastery. Hilarion was the disciple of Anthony the Great, the father of all monks. The monastery is located in Tell Umm el-Amr in the central Gaza Strip. Established in 329, it is one of the oldest in the Middle East and has the remains of a church, cemeteries, columns, mosaic and marble from the Byzantine, Roman and Islamic eras and the Iron Age. Inside the monastery are the remains of Hilarion’s coffin, sans the body. Excavation operations came to a halt after French specialists and experts left Gaza at the beginning of 2014.

“In 1995, the PA [Palestinian Authority] signed an agreement with the French Institute for Oriental Archaeology in Cairo with the support of UNESCO. The French experts unearthed the monastery's mosaic floors, its services and living quarters. They halted their work after Hamas took over the Gaza Strip in 2007 and refused to deal with the ministry under Hamas' rule. What's more, Israelis did not give scientists permits to enter the Gaza Strip,” Albetar said.

Ammar Shalat, a shepherd residing near the convent, spoke to Al-Monitor of the people's interest in the area. “Rarely anybody comes here, and no one takes interest in the location but the foreign delegations that came years ago. These visits now stopped due to the political situation,” he said.

Rashad al-Madani, history professor at Al-Quds Open University, believes that the lack of attention given to the monuments lies in the lack of care tended for these antiquities and the lack of awareness campaigns in schools. He told Al-Monitor, “The everyday problems that Gazans struggle with — namely unemployment, wars and the bad political situation — play a significant role in this disinterest. Also, the siege on Gaza has disrupted tourism. The siege has killed history.”

Despite the lack of interest, there are illegal exploration operations being carried out by individuals who steal artifacts behind the backs of the government and residents. Mohammed Khella, deputy minister of tourism and antiquities in Gaza, told Al-Monitor, “Exploration operations are taking place under the table. [The ministry] is cooperating with the General Investigation Department in Gaza. Many artifacts are being confiscated, and we have yet to bring these operations to an end. In the archaeological area of Tal Rafah, southwest of Rafah, a Roman pitcher that was in the possession of a citizen was confiscated with 1,300 old coins, worth a million dollars. Many artifacts are missing.”

Khella said the dereliction of historical sites and the people's lack of awareness can be attributed to the lack of cooperation with the national unity government or with any of the international organizations that hope to embark on excavation projects to provide special protection for heritage, launch awareness campaigns or establish new museums.

Amid the inability of the current Palestinian government to collect the artifacts in one location, some people in Gaza collected hundreds of artifacts and established their own museums in a bid to preserve or potentially benefit from them by displaying them in international museums.

Marwan Shahwan is an amateur who established his own museum in Khan Yunis. He owns thousands of artifacts that he collected over a period of 30 years. He bought some, others he dug up. Scores of foreign delegations visited him over the years, including the Norwegian Ambassador to Palestine Hans Jacob Frydenlund and the Chinese minister of information, in addition to French and British delegations as well as a UNESCO delegation.

“I’ve received many international offers from Kuwait, Qatar and France to establish a 15-acre museum, none of which materialized. If the museum is established, it will be visited by locals and foreigners. All those who visit me at my place are journalists and concerned official delegations. No locals knock on my door,” Shahwan said.

Despite the fact that Gaza has great archaeological sites, it contains only one, small public museum called the “Pasha's Palace Museum,” affiliated with the Ministry of Antiquities and Tourism, which owns a small apartment along with the Ministry of Agriculture in the Abu Khadra government building in central Gaza City. Since the beginning of 2015, around 6,000 visits by locals have been registered, according to the Ministry of Tourism and Antiquities.