Palestinians are seeking to register the western side of the Baptism Site on the Jordan River as a World Heritage Site. 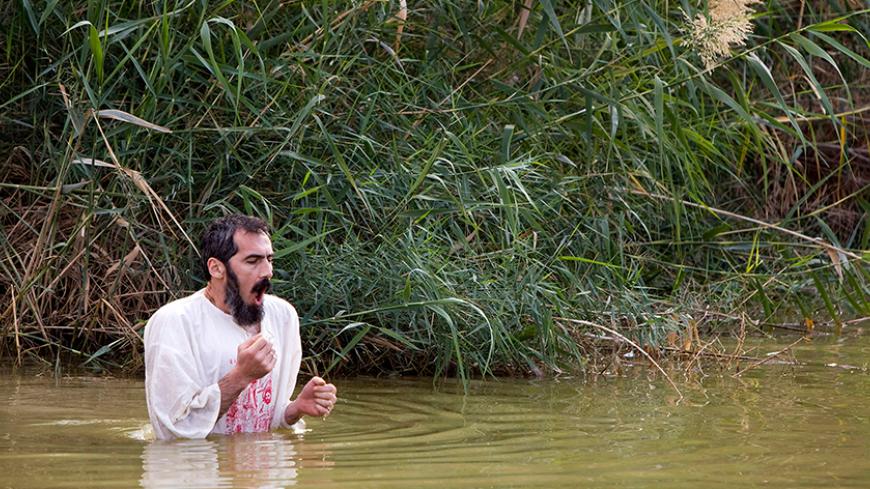 An Orthodox Christian reacts during a ritual baptism ceremony in the Jordan River at al-Maghtas site, Jan. 18, 2009. - REUTERS/Paul Hanna

JERICHO, West Bank — Marah Khalil, a Christian woman from the northern West Bank town of Nablus, has always dreamed of baptizing her child where Jesus Christ was said to be baptized in the Jordan River. However, when she had her first and second son, the site was closed to the foreign and local Christian pilgrims for security reasons and she could not do so. By the time her third son Issa was born, she vowed to baptize him in al-Maghtas, or the Baptism Site in Jordan.

Al-Maghtas is a sacred Christian site situated along the Jordan River near the Palestinian city of Jericho, where Jesus Christ was baptized by St. John the Baptist, according to the various gospels.

Khalil, who follows the Latin Church, told Al-Monitor that she got used to baptizing her children at the early age of three months but that she would delay the baptism of Issa until Epiphany (Three Kings' Day) to get the blessing of the place, which is considered one of the holiest places for Christians.

"All Christians in the world wish to have their children baptized in this river. As citizens of this country, we are lucky to have access to this blessing and the spiritual joy of visiting this place. It is enough to imagine that Jesus Christ was here," she said.

Khalil intends to visit al-Maghtas on Epiphany on Jan. 6, 2017, which is considered a main Christian feast after Christmas and New Year.

All Christians in Palestine and the world value this place spiritually. Archbishop Atallah Hanna of Sebastia said that this is the holy water that existed when Jesus Christ was baptized and where Christianity spread to the entire world.

"All Christian pilgrims seek to visit this place and receive the blessings of its holy water. We can almost assert that all people who visit Palestine visit this place," he told Al-Monitor.

Hanna said that the area where the site is located was completely closed by Israel for visits after it occupied the area in 1967, and monks were expelled under the pretext that it was classified as a military area. The monastery remained empty from 1967 until 1985, when monks were allowed to enter once a year on Epiphany. In 2011, it was opened to tourists and pilgrims.

In addition to its religious significance, the site holds great historical importance. For that reason, and despite international agreements, Israel refuses to hand it over to the Palestinians.

Iyad Hamdan, the head of the Ministry of Tourism office in Jericho, underlined the value of the site, saying, "Al-Maghtas is situated along the Jordan River and it is where John the Baptist baptized Jesus Christ. It is home to several churches and monasteries, including churches and other historical sites that are still being frequented and that are affiliated with the Greek Orthodox Church."

Hamdan noted that these churches and monasteries had been built in several spots in the late fourth and early fifth centuries near and around the Jordan River.

But they were initially built at the location where Jesus had been baptized. Hundreds of meters away, other churches, some of which were abandoned and others inhabited by clerics and hermits, were built during different times between the fifth and ninth centuries. Some were renovated during the Crusaders' occupation.

There are many churches along the borders to the east of Jerusalem Mountains in Hebron, all the way to Bani Na'im town in Hebron. Many desert monasteries were built in this region, and these monasteries served as shelters for hermits and monks who were escaping oppression and seeking protection for Christianity at the time.

Inhabited monasteries until now include Deir Hejleh, Mar Saba Monastery, St. George’s Monastery and the Monastery of the Temptation.

Hanna Issa, the head of the Islamic-Christian Commission for the Support of Jerusalem and Holy Sites, said that the western side (Palestinian side) is where Jesus was baptized, and it is closest to Jericho.

The Jordan River is the boundary between Jordan and the West Bank, specifically in Jericho. After the occupation of the West Bank in 1967, Israel controlled the Palestinian part of the river and considered it a military border zone. The accurate location where Jesus was said to be baptized is yet to be determined. Hanna says that the western bank of the river is most likely the baptism site since it is the closest to the Galilee.

Hanna told Al-Monitor, "Until 2000, the place was an archaeological site. But after the pilgrimage of Pope John Paul II to the Holy Land in March 2000 and his declaring it a sacred pilgrimage site for Christians, al-Maghtas became largely visited by Christian pilgrims from across the world. Over 300,000 people visit it every year."

Ahmad al-Rajoub, the official in charge of the World Heritage List at the Ministry of Tourism and Archaeology, noted that the file is ready to be processed for the inscription of the western side of al-Maghtas on the World Heritage Tentative List. It has been submitted to the World Heritage Center to be included on Palestine's tentative list.

Rajoub told Al-Monitor, "In July, there will be a vote on including the site on the tentative list, thus increasing the number of Palestinian sites on the World Heritage Tentative List to 14."

Israel is trying to register the place on the World Heritage Tentative List under the name "Qasr el-Yahud," but Hanna refuses this naming because it holds inaccurate political insinuations, since Israel is trying to give the place a Jewish character and claim that it reverts to it. "The correct religious and historical name is 'John the Baptist Monastery,' where John the Baptist Church is located," he said.

Hanna said, "We don't just refuse this naming. We condemn it because it tarnishes the sanctity and status of this place, which is Christian. We refuse the use of any terms that distort the holiness of the site."

Despite the political complexity of this place, its spiritual and religious value has made it a dream destination for every Christian in the world to extract the blessings of its holy water that touched Christ's body and the land he walked on.