Mona Adnan Ghalayini, Gaza’s top businesswoman, talks to Al-Monitor about her journey to reach the position she currently occupies despite the social restrictions. 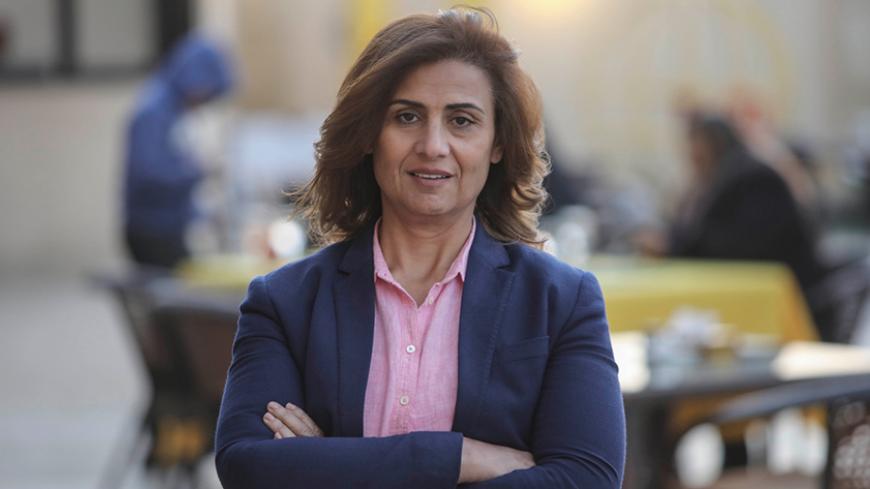 GAZA CITY, Gaza Strip — Mona Adnan Ghalayini grew up in the Beach refugee camp, west of Gaza City. Her middle-income family gave her the freedom to study abroad and choose a profession that suited her, unlike the conservative families of a lot of girls, who were only allowed to major in fields deemed suitable for women, such as teaching, nursing and administration. Ghalayini began her career as a hotel receptionist and now manages five establishments — hotels, restaurants and shops — in Gaza.

Ghalayini is the only Gazan woman supervising tourism and commercial projects in Gaza. She received an accounting diploma in Jordan in 1992 and subsequently got into the tourism sector in Gaza, working in hotels and restaurants. She is now the most prominent businesswoman in Gaza. Al-Monitor interviewed Ghalayini in Gaza City at the Roots 2 Hotel, which she manages.

Al-Monitor:  When and how did you start working in the hotel industry? How long did you work in the industry? Did your father support you?

Ghalayini:  I started in 1992 as a receptionist at a hotel by the Gaza beach. Six months after I started working at that hotel, I was promoted to assistant manager, which allowed me to build connections in the field. I received several job offers from telecom companies and big banks, but my ambition was bigger. I worked as an assistant manager for five years, and then the hotel shut down due to the economic situation, so I moved to the business world and got into a partnership and established the Sea Breeze hotel in Gaza in 2000 and managed it. The hotel consisted of eight rooms, and it had a restaurant at the bottom. Then in 2003, I worked as general manager at the Big Bite restaurant facing Al-Azhar University in Gaza, and then years later, I undertook other projects that are now significant in the Gaza Strip.

My father supported me, of course. He trusted me and allowed me to choose the field I wanted. I was thus able to study in Jordan, and my sister studied in the West Bank. I have a family that preserved a tremendous sense of togetherness, even after the death of my father. I also have partners and friends who offer me unwavering support to keep going in this field.

Al-Monitor:  What are you doing now? What is your field?

Ghalayini:  I am general manager of five projects in Gaza. At 7:30 a.m., I start checking the progress of work at hotels, restaurants and supermarkets, and I visit workers on a daily basis. I often try to steal some time to meet up with some friends and family.

Al-Monitor:  How have you managed to come a long way?

Ghalayini:  Life leads to success in its own way, and all those who excel in their fields make progress. I always like to travel and discover life abroad, especially the world of hotels and restaurants. On each trip, I stay in five-star hotels to learn more about the management of these establishments. I travel twice a year. Using a business travel permit, I go to the West Bank through the Erez crossing between Gaza and Israel, and then I travel from the Amman airport in Jordan, or the Egyptian Rafah crossing when it is open.

I've traveled to several countries, including the United States, Sweden, Norway, Denmark, Finland, Morocco, Saudi Arabia, Qatar, Bahrain, the United Arab Emirates, Turkey, France, Spain, Jordan and Egypt. Gaza has an environment where it is difficult to create opportunities and start successful projects, but I always try to combine foreign achievements in the field, the mentality here and the economy in order for projects to do well.

Al-Monitor:  How many employees do you oversee, and what are the projects that you supervise?

Al-Monitor:  The chairman of the Palestinian Committee for Restaurants, Hotels and Touristic Services, Salah Abu Hasira, told Al-Monitor that female workers in these sectors in the Gaza Strip only number 10. This is a very small number. Why do you think the number is so low? How can it be increased?

Ghalayini:  I do not want to say that the field of tourism has become the preserve of men and that it is impossible for women to work in it, as there was a time, from 1995 to 2000, when females worked in the tourism and hotel sector. There were several hotels where female employees were working hard, but I cannot find any explanation for why women are not currently working in this sector. I often wonder if it is customs and traditions or the political situation. I do not have a clear answer.

Because I am a woman, I tried and excelled at this sector, and I found broad achievement horizons in this field, contrary to what many might think. When I am at the Big Bite and female university students come to dine, they often ask me the reason behind my success, and I always say, “When one has a set goal, ambition always helps reach this goal.” They look at me as a role model.

Al-Monitor:  What are the social causes that prevent women from working in the Gaza Strip?

Ghalayini:  I am sure that there are women who are able to work in this sector, but they have been offered few opportunities. Add to this that men monopolize many professions in the industry sector, and they control the business world. There are a lot of women who work in education and health in Gaza, and some of them have served as examples for women who successfully managed schools. But most women in Gaza prefer to stay at home due to our societal beliefs. They do not like going out much.

Al-Monitor:  Do you experience challenges when you meet businessmen, since you're the only woman in the field?

Ghalayini:  People probably tend to think that I face difficulties because I am the only woman in a field full of businessmen in a conservative society such as Gaza's. But I was able to convince men and many people through my project management skills, and I successfully partnered with a group of men, mostly older than I am, in economic projects. Respect and affection are the name of the game to overcome Eastern difficulties and reach the highest point of achievement and success. I do not see any challenges, as I am committed to treating everyone with affection and respect.

Al-Monitor:  In the past seven years, there have been three wars between Gaza and Israel, in addition to the blockade on Gaza. How have your projects flourished during this period, despite the poor economic situation?

Ghalayini:  There aren’t many entertainment alternatives in Gaza. There are only a handful of tourist places. After the war, tourist places recover because people feel the need to entertain themselves after an exhausting conflict and painful scenes of destruction. They go to restaurants, hotels and cafes, and this is why we develop a plan to attract people and change their mood.

For the next phase, everyone is thinking of stability and looking at the opening of the crossings, and the tourism sector will be more successful than any other sector. The Gaza Strip has no industry or agriculture. It only has a sea, some restaurants, hotels and cafes, and the economic future will depend on tourism. I can imagine the next stage. If the crossings are opened and tourists are allowed to visit, many families will be able to live off tourism returns. 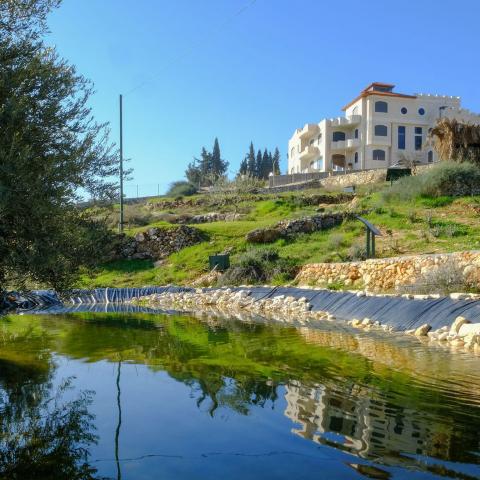