Despite high literacy and education rates among Palestinian women in Gaza, only one in ten can find employment. 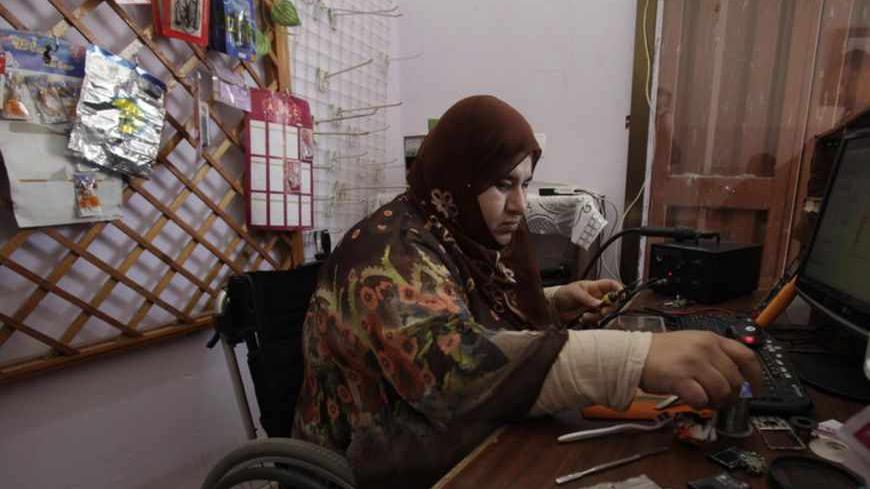 Manal al-Satari fixes cell phones at her shop in Rafah, in the southern Gaza Strip, April 7, 2013.

Mona Ghalayini is one of the few women in the Gaza Strip who has managed to join the world of business and the economy, for many years a preserve of Palestinian men. Gaza is home to a conservative society that does not give women much space, but some women, like Ghalayini, have nonetheless managed to establish themselves in business despite societal prohibitions and economic hardship in Gaza.

Ghalayini, 42, began her career as a restaurant employee in Gaza following the establishment of the Palestinian Authority. When the restaurant closed, she decided to start her own business. After obtaining funding from a lending institution, she leased a hotel in Gaza with two partners. She also ran a restaurant by herself for a number of years, and it became quite successful. She later opened the first fast-food restaurant in Gaza City, which also met with great success. This encouraged Ghalayini to continue her climb up the ladder and to eventually open one of the most upscale restaurants in Gaza. Slightly more than a year ago, she established a hotel on the coast with a $2 million investment, a move Ghalayini described as a "risk" in light of the current economic situation in Gaza.

The Gaza economy has been sagging as a result of the Israeli blockade imposed against Gaza in 2007, with repeated closures of commercial crossings, restrictions on the import of goods and movement of people resulting in astronomical unemployment rates, which in 2011 reached a high of 45%, especially among youths.

There remains a significant lack of female participation in the labor force despite a remarkable rise in the level of female education in Palestinian society, where the female literacy rate now equals that of males. Nadia Abu Nahla, director of the Women's Affairs Technical Committee, a civil society organization operating in Gaza and the West Bank, told Al-Monitor that no more than 14.3% of Gazan women are employed, compared with 66% of men. This roughly means that one out of every 10 women participates in the labor force versus seven out of 10 men.

In an interview with Al-Monitor, Abu Nahla explained that women usually work in low-ranking jobs in the service sector. Roughly 40% of women laborers in Gaza and the West Bank are employed in the health, education and social sectors. Some 85% of women in the Palestinian territories are not part of the formal labor force.

Abu Nahla pointed out that the social and cultural infrastructure of Palestinian society inhibits women's participation. "A large proportion of women are still outside the scope of the workforce, and a large proportion are working either within their families or in an unofficial field without receiving any pay, thus failing to benefit from the privileges and protection approved by the labor law,” she said.

Ghalayini believes that the secret to her success is her love of her chosen profession more than anything else. In an interview with Al-Monitor, she said, "A lot of women come to consult with me regarding investment projects. I always tell them that women are capable of succeeding in the world of business just like men, but you have to be convinced of your work before you think of investing the money that you have.”

Working in a sector that many in Gaza believe should be the purview of men only, Ghalayini does not dismiss the social pressure she experiences. “Society accepts what is imposed on it, and I for one have decided to turn a blind eye to all these opinions. I [drove] myself and succeeded in the field that I’ve chosen.”

Ghalayini, who has a diploma in accounting from a college in Jordan, is one of the few females in Gaza to have entered the formal economy, started her own business and succeeded in it. Women in her position have found that their success typically comes with sacrifices. Ghalayini told Al-Monitor, “I have no social life. I do not have time for social courtesies. Those who work in the field of investment have to give up on their social life to be able to succeed.”

After Hamas took control in Gaza, it imposed restrictions on women's employment in the tourism sector, and it prohibited the owners of resorts, restaurants and hotels from hiring women to work as waitresses. It also imposed restrictions on males and females mixing in certain types of work. This meant that Ghalayini could not hire any of the women who applied to work at the businesses she manages.

A study by the Ramallah-based Palestinian Women’s Research and Documentation Center concluded that the challenges faced by Palestinian women in the labor market stem from poor economic conditions, societal constraints on their employment and professions in which they can compete as well as a limited demand for female workers.

Several civil and women's organizations in Gaza seek to support small businesses that employ women in order to help them confront the obstacles they face amid the deteriorating economic conditions in the besieged coastal strip, especially in the fields of agriculture and services.

“We do not rely on accurate economic estimates. I work in tourism, and I do not know what it is going to be like in the near or distant future, be it economically, politically or socially,” Ghalayini said. “We are taking risks in our investment, but we have no other choice but to work here in Gaza.”