Controlling local mosques has long been a Hamas strategy to ensure a large support base. 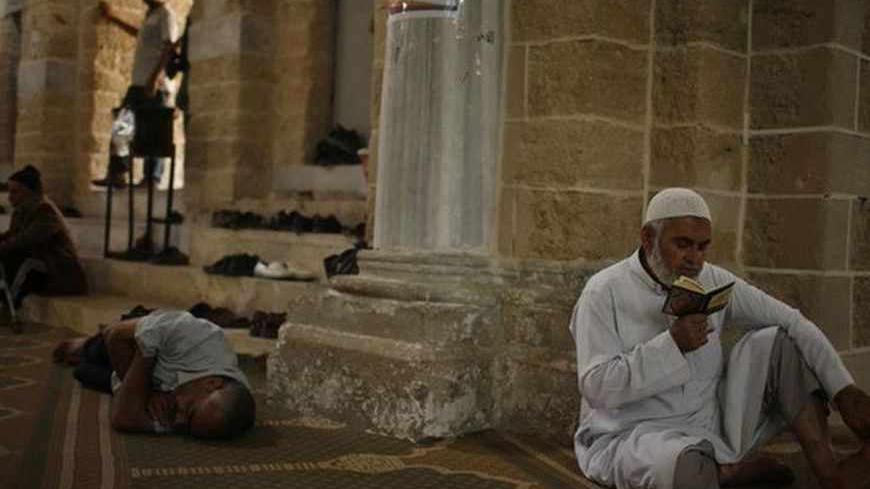 A Palestinian man reads the Quran as another man takes a nap at Omari Mosque in Gaza City, during the first day of the holy fasting month of Ramadan, July 10, 2013. - REUTERS/Mohammed Salem

Twenty bearded youth sit in the courtyard of a mosque in Gaza City after worshippers depart from afternoon prayers. They meet every week in a small, self-directed prayer circle to recite the Quran in succession.

When the Quranic recitation session draws to a close, the young man heading the gathering begins to speak about the political situation in Egypt, deposed president Mohammed Morsi’s ouster and its impact on the global Islamist movement. He sketched out at length all the obstacles that had been put in Morsi’s path, bringing Egypt to the point where, he said, “The coup would almost seem as if it were in accordance with the popular will.”

The conversation revolved around this issue, with every young man relating what he had heard from various media outlets — particularly those affiliated with the Muslim Brotherhood. They described what they had read and seen on the Internet and various social-media sites. Before the end of the gathering inside the mosque, all of them had reached the firm conviction that the Brotherhood would not meekly surrender, but would go on fighting until Morsi returns to the presidency.

Since its founding in the late 1980s, Hamas has relied upon mosques as one of the principal means for cultivating its popularity. This was due to the ease with which the general public could assemble there, as well as the mosque’s ability to influence the public intellectually, politically and culturally. It should be noted that several Palestinian Islamist movements have engaged in fierce competition to win control over the mosques.

The Palestinian Authority has repeatedly attempted to undermine Hamas’ control of the mosques through edicts by the Ministry of Awqaf and Religious Affairs, so as not to leave the field open to the other Islamist movements. It has also attempted to appoint preachers and not been tolerant of activities other than prayer within those mosques. But these attempts have usually met with failure, due to the Islamist groups’ tendency to conduct their activities in secret.

Hamas has invested in mosques, gradually taking control of them over the years, a practice accelerated by the group's sweeping victory in the 2006 parliamentary elections. This came about by influencing the views of voters and exploiting religious discourse and the wide public platforms provided by the mosques, in addition to Hamas' tactic of putting forward well-known sheikhs and mosque preachers as candidates for office.

Mosque activities vary between the ideological, the political and the cultural, and can also include sporting events. These target Palestinians of all demographics and age groups, as well as both genders. They are supervised by specialized committees organized in every mosque. All of them, however, follow the central leadership of the Muslim Brotherhood’s Dawa department.

Abu Muhammad is responsible for one of the mosques affiliated with Hamas. Introducing himself with the title of emir, he spoke to Al-Monitor in his mosque on July 22 about the activities that he directs. “The mosque is the fundamental basis of [our] work. Without it, we in Hamas would not have a significant role in Palestine. We speak to all groups in a single language, seeking to draw them closer to our way of thinking.”

He explained that there are several committees at work, the most important of them being the Dawa committee, which supervises the different activities that take place within the mosque. There is also the social committee, which provides assistance to poor families and communicates with the people living in the vicinity of the mosque. The latter endeavors to remain in close contact with congregants by making house calls, often assisting them in resolving private problems. In addition, there is the athletic committee, which is responsible for supervising different sports-related activities and managing each mosque’s soccer team.

Mosque activities target four main age groups. There are the pre-teens, aged 12 and under; the adolescents, aged between 12 and 15; the mature, aged between 16 and 18; and young adults and men over the age of 18.

According to statistics obtained by Al-Monitor from Gaza’s Ministry of Awqaf and Religious Affairs, there are around a thousand mosques in the Gaza Strip. Of these, 870 are registered with the ministry, which supervises them. They are divided among Gaza’s five governorates as follows: 258 in Gaza City, 250 in Khan Younis, 150 in Rafah, 105 in the central governorate and 107 in the northern governorate.

Israel has targeted mosques during clashes with Hamas, destroying 34 completely and damaging another 167 in Operation Cast Lead (2008-2009). The Israelis claimed that these mosques contained weapons stockpiles used by armed factions. During the eight-day war in November 2012, Israel bombed 67 mosques. Of these, three were completely destroyed while 64 were severely damaged.

In addition, Abu Muhammad pointed out that the mosque is a place where one can “form cadre leaders, guiding them intellectually and politically by planting Islamic seeds in their souls, as well as creating a base for confronting foreign ideas coming into Muslim Palestinian society.”

A well-informed Hamas source who spoke to Al-Monitor on condition of anonymity said, “The government in Gaza relies principally on mosques for conducting security reviews of employees before their appointment to various government positions. It also accepts recommendations for appointment of professional cadres required by the various ministries.”

The source added, “Political notices are distributed across the mosques so as to disseminate them among various youth groups and clarify government positions on various issues. This is done to prevent them from being influenced by media outlets opposed to Islamic government in the Gaza Strip, as well as to spread the word in surrounding society.”

In all the mosques, several billboards with announcements hang overhead announcing at regular intervals bulletins prepared by Hamas and its ministries, particularly the Ministry of Interior. They typically call for support of campaigns such as the one against informants collaborating with the occupation, or against the consumption of the drug Tramadol. There are also political brochures hanging from the boards that share Hamas’ view of political events.

The source also pointed out that the mosques constitute branch headquarters for Hamas institutions. They aid the security agencies in gathering intelligence on security and criminal issues that might be taking place locally, particularly since the mosque administrations possess intimate knowledge of the local population.