Fighters from Al-Quds Brigades say they are ready to fight in Syria alongside Hezbollah if requested. 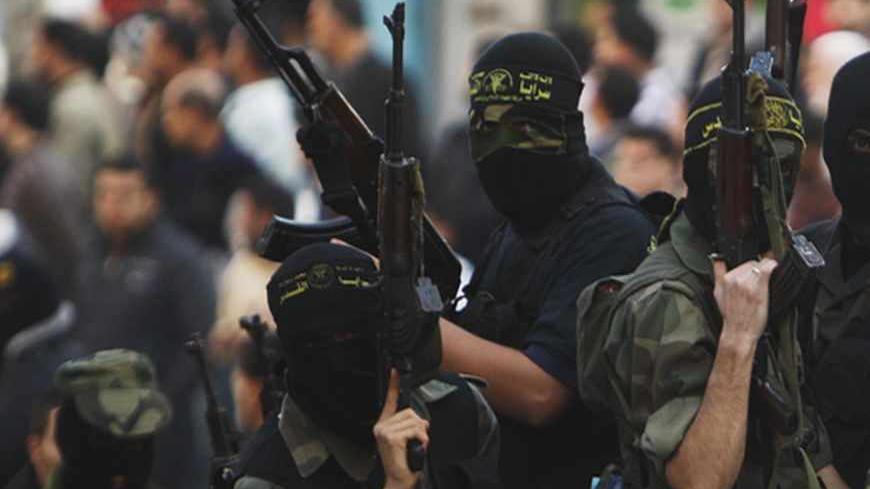 Palestinian Islamic Jihad has warned that it may respond if Israel enters any war in Syria, as expectations rise of a possible US strike on Syria.

A high-ranking official from Islamic Jihad told Al-Monitor that — upon request from Iran and Syria — Islamic Jihad may lob rockets at Israel if the events develop toward an all-out war against the Syrian regime and if Israel enters the war.

The source told Al-Monitor on condition of anonymity, “Up until now, there has been no decision within Islamic Jihad to bomb Israel in response to an aggression on Syria. But that may happen in one circumstance: if Israel joins that war as a principal party.”

The source said that the strike’s nature and details in terms of its quality and duration will determine Islamic Jihad’s position, given that the second-largest Islamic movement in Palestine still maintains close relations with the Iranian and Syrian regimes as well as with Hezbollah.

“Islamic Jihad’s leadership has currently no significant presence in Syria, but there are still financial and political links. Hezbollah’s position toward the war could negatively or positively affect whether Islamic Jihad will participate,” the source relayed.

Some Al-Quds Brigades elements said that, if permitted, they will fight in Syria alongside Hezbollah elements against any external force threatening the Syrian regime.

“We hope that the border is opened so that we can travel to Syria to participate in repelling any Western aggression on Syria, to which we are grateful for allowing many of our elements to train on its land,” Al-Quds Brigades elements deployed on the Gaza-Israel border told Al-Monitor.

Sheikh Nafez Azzam, a member in the Islamic Jihad’s general political bureau, said that Syria does not need Palestinian fighters to participate because Syria already has enough capabilities and that Palestinian elements participating in that war will not affect the power balance.

In an interview with Al-Monitor, Azzam said that he does not expect Iran will request action from Islamic Jihad in response to a US strike on Syria, and that “Iran understands the Palestinian political complexities. Iran doesn’t need members of Islamic Jihad to fight.”

Hassan Abdo, a political writer who is close to Islamic Jihad, believes that whether Islamic Jihad will respond to a US strike on Syria by attacking Israel depends on the nature and size of the US attack.

In an interview with Al-Monitor, he said, “If the strike is comprehensive, then Syria is expected to retaliate against Israel, which may draw a response from Islamic Jihad toward Israel. But according to information, Syria will only be punished without bringing its regime down.”

“The Al-Quds Brigades will not try to portray its shelling of Israeli towns as a response to the attack on Syria because there are many other justifications it can use, such as the Israeli aggression on the Palestinians in Jerusalem, the West Bank and the Gaza Strip. The Al-Quds Brigades doesn’t wish to embarrass Hamas, which is trying to stay away from a confrontation with Israel,” Abdo continued.

Islamic Jihad figures whom Al-Monitor spoke with denied that their group would participate in a war against Syria, be it in Gaza or elsewhere. The group’s media, however, openly supports the Syrian regime against its opponents.

The Islamic Jihad-affiliated Al-Istiqlal newspaper wrote in an editorial on Aug. 29: “The strikes against Syria, which will come from the sea and air in the coming days under the guise of responding to the chemical attack in the Damascus countryside will contribute to the implementation of the partition schemes and will prolong the conflict and the fighting and cause the deaths of tens of thousands of Syrians. Even if we assume that the Syrian opposition will win, it will still not solve the crisis.”

With the acceleration of the events regarding Syria and the possibility of a US military strike, Islamic Jihad’s leadership does not seem enthusiastic about getting involved in a regional war that is greater than what the group can bear. Political interests, however, may play a role in changing that attitude and draw the group into a confrontation with Israel as well as with Hamas, which controls the Gaza Strip and is trying to stay away from a new military confrontation.