Iran Increases Aid to PFLP Thanks to Syria Stance

Iran has rewarded the Popular Front for the Liberation of Palestine's pro-Assad stance with an increase in financial and military assistance. 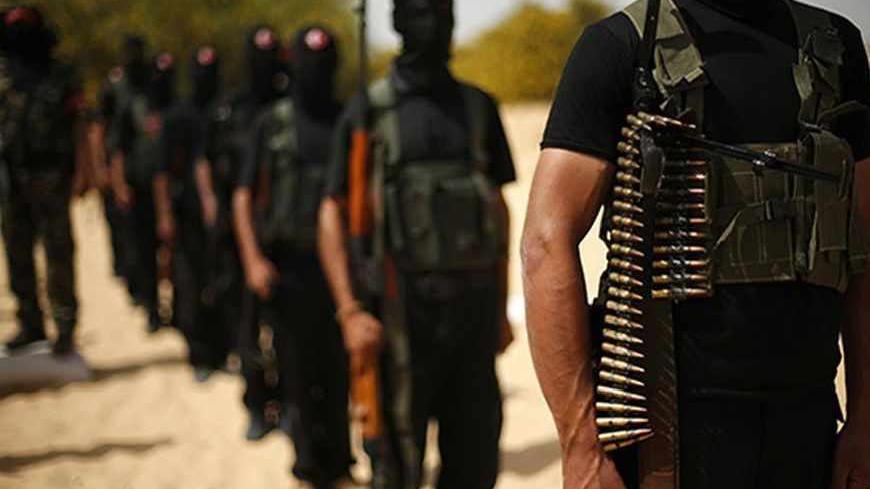 Palestinian militants of the Popular Front for the Liberation of Palestine (PFLP) stand with their weapons during a military graduation ceremony in the southern Gaza Strip, March 13, 2013. - REUTERS/Suhaib Salem

GAZA CITY, Gaza — The relationship between the Popular Front for the Liberation of Palestine (PFLP) and the Islamic Republic of Iran has gone from an impasse — when Iran was supporting Islamist movements in the Arab region during the past two decades — to Iran giving financial and logistical support for the PFLP’s political and military wings. The warming of ties has come as a result of Hamas moving away from Iran due to differing positions on the Syrian crisis.

High-level PFLP sources at home and abroad revealed to Al-Monitor that Iran has resumed its financial and military support for the group in recent months in order to strengthen its alliance with the “Palestinian resistance forces” and not limit itself to only supporting Islamist movements such as Hamas and Islamic Jihad.

The sources, who spoke on the condition of anonymity, told Al-Monitor that several meetings were held between the PFLP leadership abroad and Iranian officials in Beirut, Damascus and Tehran under the auspices of Lebanese Hezbollah. Those meetings resulted in reviving direct support to the PFLP.

“Following the resumption of Iranian support, there will soon be a dramatic increase in the strength of the PFLP’s military wing, the Abu Ali Mustafa Brigades, after the internal reorganization of the group is completed,” the sources said.

The PFLP has come out in support of the Syrian regime and Hezbollah’s position on the Syrian crisis. PFLP officials have made pro-regime statements and held Gaza rallies in which participants raised pictures of Hezbollah Secretary-General Hassan Nasrallah.

Abu Ahmad Fouad, a PFLP political-bureau member and former PFLP military official, said that the group might retaliate toward Israel if the United States bombs Syria. “We are not exaggerating our capabilities, but we will be in the anti-occupation and anti-aggression resistance trench. We will use the available resources, and we will try to gather the energy of all forces and factions in the face of this aggression, mainly against the Zionist occupation. Our capabilities are found in our occupied country and we will be on the side of our brothers in Hezbollah if they gave us a role in resisting the occupation,” Fouad said in an interview with Al-Mayadeen TV last week.

In a discussion with Al-Monitor, Muhanna did not confirm nor deny the return of Iranian financial and military support for the PFLP.

Al-Monitor met with Abu Jamal, the official spokesman for the Abu Ali Mustafa Brigades, to understand the nature of Iran’s support. “We call on all countries of the world to provide us with financial and military support and we do not oppose it at all,” he said, denying a change in Iranian support for the PFLP.

“We have received and continue to receive military training for our personnel in Damascus and Beirut at the hands of Hezbollah trainers, and maybe also from Iran, but I have no information on any other type of support,” Abu Jamal added.

Iran used to provide generous financial and logistical support to Hamas and its government in Gaza, in addition to direct support for the Islamic Jihad movement, which aided Hamas in confronting the Israeli blockade on Gaza. Iranian support for Hamas dropped when the group’s leadership left Damascus and threw its support behind the Syrian revolution. But Iran retained its support for Islamic Jihad.

A Hamas source said that Iran’s policy of military support was and still is to not supply all Palestinian factions with the same types of weapons, and that this was evident in its support for the Al-Quds Brigades, Islamic Jihad’s military wing, and the Al-Qassam Brigades, Hamas’s military wing.

The Hamas source, who refused to give his name, told Al-Monitor that the group is aware of Iran’s support for the PFLP and that he expects the support to come in the form of money at the current stage and develop into significant military support in later stages.

The relationship between Hamas and the PFLP is somewhat tense due to their different political positions, the latest incident between them occurring when elements in the Abu Ali Mustafa Brigades tried to launch shells from Gaza toward Israeli towns on the 12th anniversary of the martyrdom of the group’s namesake and former secretary-general.

Abu Jamal described the details of the incident to Al-Monitor. He said that elements from the Ali Mustafa Brigades tried to fire missiles at Israel on Sept. 5, but were prevented by Hamas security forces in northern Gaza. The homes of seven members of the Ali Mustafa Brigades were raided. Two were arrested, but subsequently released and the seized shells were returned.

In an interview with Al-Monitor, political writer and human rights activist Mustafa Ibrahim said that Iran is trying to establish as many relationships as possible with factions, institutions and individuals in order to enhance its strength and influence in the region.

A PFLP source in Gaza said to Al-Monitor that Iran is now more eager to establish relations with the group due to the decline of Islamist forces in Palestine and the Arab world and Hamas’ political isolation.

“We used to ask Iran for support and they used to drag their feet. But today, they are providing us all we ask for without any hesitation at the financial and military levels, especially after they became convinced of the PFLP’s distinctive position toward the Syrian crisis.”