Islamic Jihad is quietly concerned that improved US-Iran relations might result in Tehran rethinking its approach to the Palestinian cause. 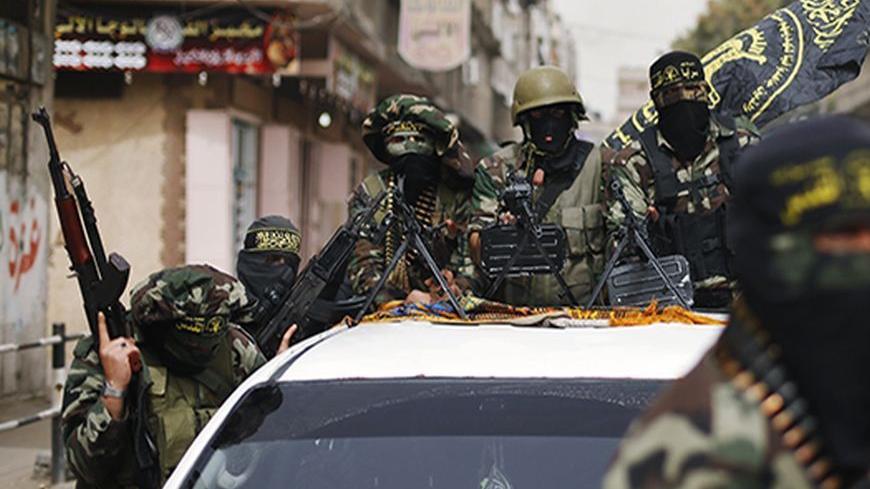 Islamic Jihad militants ride on a pickup truck as they follow the convoy of freed Palestinian prisoner Ibrahim Baroud, upon his arrival in the northern Gaza Strip, April 8, 2013. - REUTERS/Mohammed Salem

GAZA CITY, Gaza Strip — As signs of an entente between the United States and the Islamic Republic of Iran increased, talks abound about the possibility of both sides agreeing to concessions meant to lead to an actual reconciliation. Such a reconciliation could ultimately affect Iran’s stance vis-à-vis the Palestinian cause and the support that it gives to some Palestinian factions, both financially and militarily.

Islamic Jihad, which is has the closest relations out of the Palestinian factions to Iran and is the recipient of generous financial and military backing from the latter, expressed cautious concern toward the prevalent signs of a rapprochement between Iran and the United States. Furthermore, it was leery that its relationship with Tehran might be affected and the support it receives curtailed, which would negatively affect its performance on the ground.

On the other hand, Hamas, which rules the Gaza Strip, did not express a lot of concern about the possibility that Iranian-American relations could improve. Its own relationship with Iran has been tense and at its lowest point for the past two years, as a result of its stance towards the Syrian crisis.

Despite most of Islamic Jihad’s political leaders refusing to publicly comment about the budding Iranian-American entente, a high-ranking source inside the movement told Al-Monitor that the movement felt “apprehension and concern that the sudden rapprochement between the two parties might negatively impact the amount of support to the Palestinian cause, because the US is the main backer of Israeli occupation.”

“Since word spread about contact between the two sides, which was culminated by the phone call between Presidents Barack Obama and Hassan Rouhani, concern began creeping in the minds of Islamic Jihad’s leaders. This is because the movement primarily relied on Iran’s financial, military, and political support,” the source, who preferred to remain anonymous, told Al-Monitor.

“We are not worried in the short term, and do not perceive the ongoing negotiations to be a threat to the support received by the Palestinian cause and resistance factions. But we are concerned that, as the relationship between the two sides progresses, the US might request that support for Palestinian factions be curtailed, which we assert will not happen anytime soon,” he added.

Islamic Jihad has close ties with Iran and its allies in the region, such as Syria and Hezbollah. This has allowed it to receive backing on all levels, and has distinguished it from other Palestinian factions, insofar as the types of weapons that it alone was given, according to sources from both the Islamic Jihad and Hamas.

Hassan Abdo, a political affairs writer with close ties to Islamic Jihad, thought it unlikely that the Iran-US rapprochement would lead to a change in support for the Palestinian factions “because the Islamic Republic’s stance is firm and genuine.”

“The issue will not solely revolve around Palestinian factions, but will also touch on Iran’s actions on the regional and international arenas. The Palestinians will therefore not be directly impacted,” Abdo said in an interview with Al-Monitor.

At the same time, he opined that Iran would also change its media rhetoric towards the United States, if real reconciliation ensued. “The previously prevalent slogans uttered by Iranian politicians, such as ‘death to America and Israel,’ will become less evident during Rouhani’s reign.”

For its part, Hamas considered that changes in political stances might occur if real reconciliation ensued between the Americans and Iranians. But it regarded such an eventuality to be unlikely in the short term, because the chasm was still wide between the two.

“Reconciliation between the two sides might lead to a decline in Iranian support for Palestinian resistance movements in the region. But there won’t be any radical changes to the political stances vis-à-vis the Palestinian cause,” said Naim.

Naim clarified that Hamas would not be greatly affected by any changes that might occur because, contrary to other Palestinian factions, it never relied on Iran as a sole source of support.

He pointed out that Iran still needed the Palestinian factions “as regional proxies in the region, and that continued relations fell within the scope of purely Iranian interests, not just Palestinian ones.”

“Iran is not in a vulnerable position now and does not need to surrender its sources of strength to the Americans at this stage,” he added.

Political affairs writer Mukhaimar Abu Saada also found it improbable that the current entente would result in any changes to Iran’s backing of Palestinian factions at this stage. However, he did not rule out such changes taking place in the mid- to long terms, if relations between the United States and Iran continued to develop.

Speaking to Al-Monitor, he said: “The biggest loser in the long term might be Islamic Jihad, because, over the past two years, Iran stopped all backing to Hamas as a result of the Syrian crisis. Yet, the latter will also not be very happy about this rapprochement.”

The rapprochement between the US and Iran under the rule of moderate Iranian Rouhani might not lead to radical changes in the Islamic Republic’s stance towards Palestinian factions that it currently has relations with. Yet it might, however, lead Tehran into carefully thinking about breaking the shackles of ideologies that hold it captive, adopting flexible and pragmatic policies that diverge from its traditional stances.

Hazem Balousha is a Palestinian journalist based in Gaza City. He has worked as a news producer for BBC World Service, contributed to Deutsche Welle and has written for The Guardian, Al-Raya (Qatar) and other publications. He is the founder of the Palestinian Institute for Communication and Development (PICD). On Twitter: @iHaZeMi.