Hamas allowed Islamic Jihad to fire rockets at Israel in the vain hope Egypt would communicate directly with Gaza's rulers to restore the cease-fire. 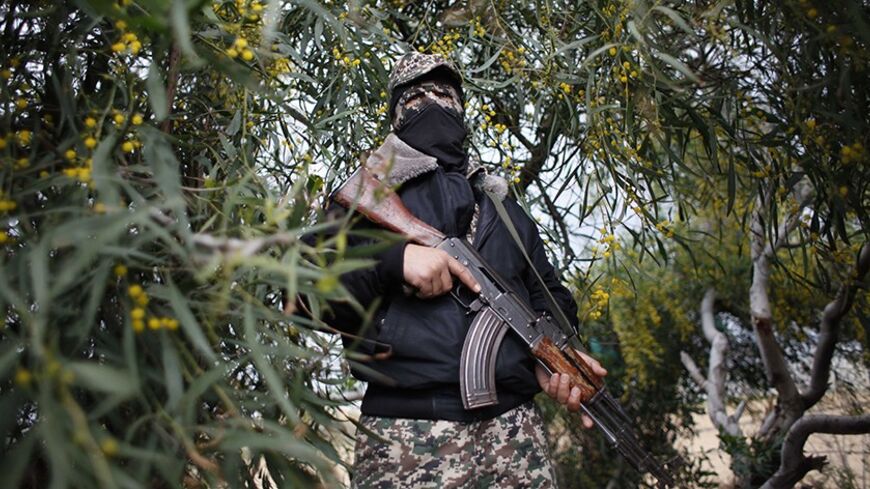 An Islamic Jihad militant stands guard near a military base that was targeted in an Israeli airstrike in Khan Yunis in the southern Gaza Strip, March 13, 2014. Palestinian militants in the Gaza Strip fired rockets at Israeli cities in the second day of a cross-border flare-up. - REUTERS/Ibraheem Abu Mustafa

GAZA CITY, Gaza Strip — The firing of dozens of rockets from the Gaza Strip toward surrounding Israeli towns on March 12, and the negotiations that took place between Egyptian mediators and the perpetrator of the attacks, Islamic Jihad, to reinstate the cease-fire, has raised eyebrows in Hamas.

In most of its statements, Islamic Jihad’s leadership tried to portray its so-called “Breaking the Silence” operation, in which it fired rockets from Gaza, as having occurred in coordination with Hamas, and not as a result of a unilateral decision on its part. Islamic Jihad Secretary-General Ramadan Abdullah Shalah told Al Mayadeen TV on March 13 that there was “communication and coordination with [other] Palestinian factions, particularly Hamas, in relation to the situation and to find the best way to manage the battle, in light of the plight of our people, and the situation in the besieged Gaza Strip.”

However, Egyptian intelligence services limited their contact to Islamic Jihad in this case, angering Hamas, which expected to have the main say in any return to the truce agreements that came into effect after the Israeli Pillar of Defense operation in November 2012.

Hamas senior official Ghazi Hamad, who's the movement’s intermediary with the Egyptian government, said in an interview with Al Mayadeen, “Egypt did not communicate with us about a return to calm, and limited its contacts to Islamic Jihad. The Egyptians did not inform us of any agreements, despite the fact that they should coordinate with Hamas [regarding such matters].”

A knowledgeable source inside Hamas, who spoke on condition of anonymity, told Al-Monitor that the movement had approved the firing of rockets from Gaza, on the condition that the campaign be measured and that it only target surrounding towns and not central Israeli cities.

“Hamas thought that doing so would compel the Egyptians to contact it in relation to a return to truce agreements, and put pressure on other factions to cease the firing of rockets toward Israeli towns, following the crisis that marred the relationship between Hamas and Egypt and the near total collapse of communications between them,” the source said.

Hamas previously refused to allow Palestinian factions, including Islamic Jihad, to fire any rockets toward Israel, for fear that doing so might drag Gaza into a military confrontation of unforeseeable consequences, in light of the political and financial crisis that the Strip was suffering.

A number of members from Palestinian factions have been arrested by Hamas security forces in Gaza when they attempted to fire rockets at Israel in the past, as explained by Abu al-Saed, the military spokesman for the Popular Resistance Committees.

“Our members might be arrested by Hamas or government security forces, or prevented from launching rockets, but we have means by which to bypass these roadblocks and restrictions,” he said.

The relationship between Hamas and Islamic Jihad changes a lot depending on the developments on the ground and their relations with outside entities, which might affect their decisions. But the political leaderships of both strive to keep any tensions out of view and maintain a high degree of composure.

From time to time, armed clashes erupt between members of the Izz ad-Din al-Qassam Brigades, Hamas’ military wing, and the Al-Quds Brigades, Islamic Jihad’s military wing, in various areas of the Gaza Strip. Such skirmishes usually occur due to military issues or personal disputes between members of the two Islamist movements, in many cases the disagreements revolving around each of them trying to establish control over newly built mosques.

The latest such skirmish occurred on March 2 in the city of Khan Yunis in the southern Gaza Strip. There were no casualties, but the clash prompted Hamas government police forces to arrest Islamic Jihad members suspected of being involved, only to later release them as a result of intervention by local leaders.

Political affairs writer Ibrahim Abu Saadeh, who is close to Islamic Jihad, told Al-Monitor that the existing relationship between the two largest military factions in Gaza was predicated on a convergence of interests and would not last forever.

“In its relationship with Islamic Jihad, Hamas is practicing political opportunism. With every military confrontation with Israel, Hamas exercises all types of pressure on the Jihad’s leadership to end hostilities, once its objectives are met and the proper messages are sent to the various factions,” he said.

The two movements established a joint general committee that meets every three months to discuss various contentious issues. Other regional committees have also been formed, as well as military command committees tasked with conferring about any military action and ensuring coordination between the two.

Officially, on a leadership level, both movements talk about them being in agreement about the various issues. But on a grassroots membership level, supporters of each camp express dislike and direct harsh criticism toward the policies espoused by each in relation to the other.

“The relationship with Hamas can be described as better than good, with both sides keen on developing it further. There are many points of agreement vis-a-vis the resistance movement and the Palestinian cause in general,” Nafez Azzam, a leading figure of Islamic Jihad, told Al-Monitor.

When asked about points of contention between Islamic Jihad and Hamas, he said, “I prefer not to talk about any points of contention, which we do not consider to be many. Any disagreements that do occur are normal, considering that both factions conduct activities in mosques, universities and on the field of battle.”

This point of view was also shared by Hamas senior official Mahmoud al-Zahar. “The relationship between the two sides is exceptional, and we both desire to develop it in service of the Islamic project,” he told Al-Monitor, adding that the formation of a joint committee to organize action between them was an indication of the special relationship that exists between them.

Since Hamas assumed control of the Gaza Strip in 2007, exploiting this control for the service of its ideologies and political aspirations, it tried to curtail the maneuvering ability of other Palestinian factions, particularly Islamic Jihad. This was in order to tighten its grip on and spread its complete control over the Strip by wooing the latter’s leaders toward its project, despite the fact that the general populous resisted those control and containment attempts.

But it seems on this occasion, Hamas’ gamble to allow Islamic Jihad to fire rockets on Israel did not achieve the desired results.