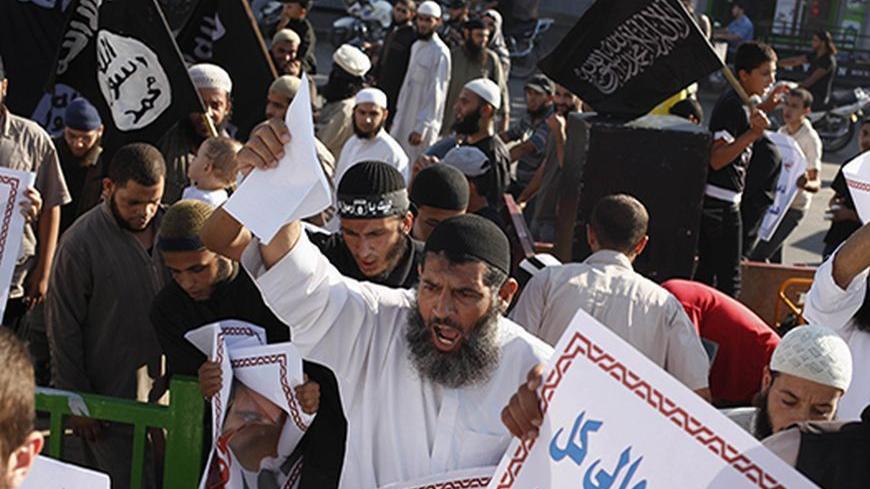 Palestinian Salafists shout slogans during a rally in protest of what they say are recent massacres committed against the Syrian people in Rafah in the southern Gaza Strip, Aug. 22, 2013. - REUTERS/Ibraheem Abu Mustafa

JABALIYA, Gaza Strip — Fahd al-Habbash sat in front of a laptop with Jabhat al-Nusra’s black banner behind him and recorded his will. The video was posted on YouTube by a Salafist group in Gaza, the Shura Council of Mujahideen, after Habbash died in Syria during a fight with regime forces.

Habbash started his video — which included photos of him participating in the fighting and photos of him after his death — by saying, “Jihad for the sake of God and for the support of [Islam] is not restricted to a certain class of Muslims. Every Muslim who is not from 'the people of excuses' has a religious duty to come to the support of [Islam] and help vulnerable Muslims everywhere. … [The decline of religion and the humiliation of Muslims], which we have been suffering for years, are due to [Muslims] leaving jihad and the absence of governance in accordance with Sharia. That led to the hardening of these tyrants around the necks of Muslims around the globe.”

“My message to my parents: If you hear news of my death or my departure from this transient world, rejoice and know that this is what I wanted,” he continued.

Habbash’s YouTube video is but one of many posted by Palestinians from Gaza who were killed fighting in Syria. The videos were posted by a Salafist group at odds with the ruling Islamist Hamas. Some videos contain clear criticism of how the Gaza government is preventing fighters from “performing jihad against the occupation.”

Al-Monitor visited Habbash's home in the Jabaliya refugee camp in the northern Gaza Strip and met his father, Nizar, who was visibly saddened by the loss of his eldest son. Nizar thought that his son left Gaza to live abroad, not to fight in Syria.

“We didn’t know that he had traveled to Syria, and he didn’t tell his wife that. He told us that he was going to Norway via Turkey, to live there because of the poor living conditions in the Gaza Strip. He used to call us and tell us that he was in Turkey. [He last called us] 10 days before his martyrdom,” Nizar said.

Habbash was married and had two daughters, one of whom was born while he was in Syria. She is now four months old. He worked in a Palestinian police agency affiliated with Hamas in Gaza. Before that, he had worked in Hamas’ military wing, the Al-Qassam Brigades. But, according to his father, he did not seem to have Salafist inclinations.

An informed source in a Salafist group in Gaza told Al-Monitor on condition of anonymity, “Palestinian youths in Gaza are being contacted and urged to travel for jihad to Syria and join the legions of mujahedeen there who come from all corners of the globe.” That call is having some resonance among young Palestinians in Gaza.

Although the source declined to disclose the number of Palestinians who traveled to Syria from the Gaza Strip, he estimated them to be in the dozens. They left Gaza through Rafah, then went to Turkey, then crossed into Syria after receiving training near the Turkish-Syrian border at the hands of the mujahedeen.

“A number of young men fought in Syria and were martyred for the sake of God there. Some were wounded and receiving treatment in Turkey. Some are still fighting there. And some returned to the Gaza Strip,” the source added, noting that the closure of the Rafah crossing is preventing many from traveling to Syria.

“… Dozens of fighters were recruited from the Palestinian population in the Gaza Strip or abroad, specifically refugees residing in Lebanon and Syria, to participate in the ongoing jihad between right and wrong. We are still preparing other groups as well,” the source said.

Hamas, which rules Gaza, has taken a supportive stance toward the Syrian opposition, but the group is — at least publicly — trying to steer clear of the fighting.

Hamas official Bassem Naim told Al-Monitor that Hamas only fights against the Israeli occupation and will not deviate from that, to not weaken the Palestinian resistance.

However, an informed Hamas source confirmed to Al-Monitor that a number of Palestinians are fighting in Syria. Some are with Jabhat al-Nusra, while others support the Syrian regime alongside Hezbollah.

“We tried hard, through some of the sheikhs close to them, to prevent a number of young al-Qaeda followers from traveling to Syria, because it affects the Palestinian cause and the support it gets from the Arab and Muslim world,” the source added. However, he did not say how successful those efforts were.

Al-Monitor tried to reach some of the young men who returned from fighting in Syria through intermediaries. But they refused to speak and only said, “We are not allowed to talk to the media about it.”

Hamas is trying to restore its relations with Iran after a cooling period and cessation of Iranian support resulting from Hamas’ position on the Syrian crisis. Hamas political bureau Vice President Mousa Abu Marzouk told Al-Mayadeen TV that Hamas wishes to reopen channels with Damascus, although this was flatly rejected by Syrian President Bashar al-Assad.