Following the death of dozens of Palestinian refugees after a boat headed for Europe sank off the Malta coast, popular discontent toward the inefficiency of Palestinian leaders’ efforts to protect their people has surfaced. 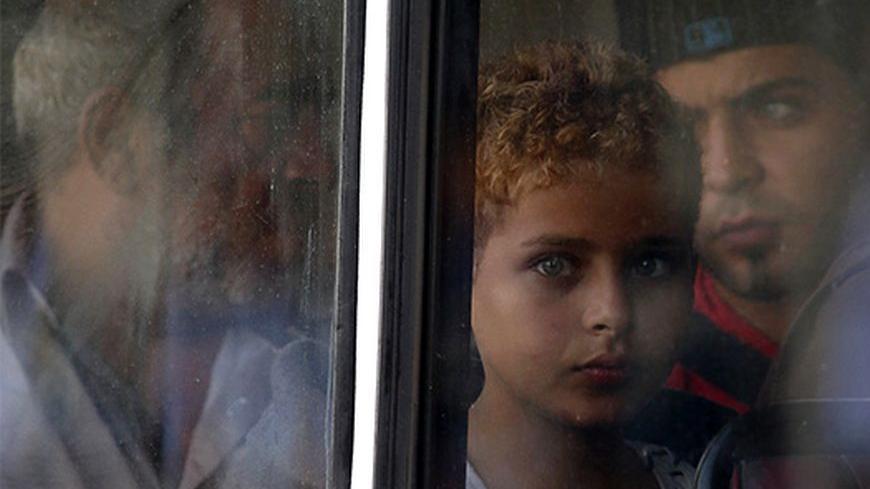 A rescued migrant child from a capsized boat that was carrying about 250 migrants looks out of the window of a police bus after arriving at the Armed Forces of Malta Maritime Squadron base, Oct. 12, 2013. - REUTERS/Darrin Zammit Lupi

GAZA CITY, Gaza Strip — The sinking of a boat carrying Palestinian refugees from Syria off the Malta coast on Oct. 11 resulted in the death of dozens. It also sparked angry reactions from Palestinians who considered the incident yet another chapter in the continuing suffering that Palestinians endure in and outside the occupied territories.

They directed their ire toward the Palestinian leadership for its failure to take action and assist those fleeing from Syria, or assuage the misery they face in Arab countries as refugees — a situation that has these refugees attempt maritime crossings toward Europe and risk their lives to flee the harsh conditions that they endure in host countries.

Interviews conducted by Al-Monitor with a number of Palestinians in the West Bank, Gaza Strip and abroad have revealed the extent of frustration with the Palestinian leaders’ inability — regardless of political affiliation — to protect, defend and provide them with a dignified life.

Ramallah resident Mohamed al-Arkoub affirmed his conviction that Palestinian factions were unable to provide their people with a minimum level of services, both locally and abroad.

“I don't think that anyone is interested in protecting us; neither the Palestinian Authority (PA) nor any organization or faction. Their primary concern revolves around their own partisan interests, and they pay no attention to the concerns of Palestinians,” he said in a phone interview with Al-Monitor.

Gaza City resident Selim Abu al-Rous said, “The boat sinking off the coast of Malta and the death of hundreds of refugees only proves that the Palestinian leadership is utterly useless. I think that they should be ashamed of themselves, for their statements of condemnation are no longer sufficient.”

“There is an urgent need for us to see the Palestine Liberation Organization (PLO), the PA, Hamas and other Palestinian factions actually take serious and meaningful steps to provide aid for the Palestinians in dealing with their problems, whether they are located in the West Bank, the Gaza Strip or abroad,” Abu al-Rous added.

In his latest speech in Gaza City, Hamas political bureau Deputy Chairman Ismail Haniyeh talked about the lack of coordination in Palestinian actions and called on President Mahmoud Abbas (Abu Mazen) to cooperate in joint efforts meant to alleviate the suffering of Palestinian refugees abroad.

“This is a good occasion to call on Abu Mazen and our other brothers in Fatah and the PA in Ramallah to cooperate and work with us to alleviate the suffering of Palestinian refugees and help them overcome the problems they face in those countries. This is a joint national responsibility for us all. We are prepared to cooperate together and facilitate the conditions and means needed to accommodate some refugees in Gaza, if they so desire. We are also ready to work together, in the spirit of national responsibility, to find solutions to our various problems and concerns,” Haniyeh stated.

Daliya Zreik is a Palestinian refugee to Lebanon who now lives in Germany. She told Al-Monitor by phone, “I have lived in refugee camps for most of my life. Not once did I feel that Palestinian leaders were serious in their support and efforts to safeguard the Palestinians and help them overcome their problems. I expected a different reaction from them after the refugee boat sank and hundreds died, but my disappointment was immense when I heard the same old statements that were only meant for media consumption.”

Hanan Ashrawi, a member of the PLO Executive Committee, issued a statement of condolence for the victims of the boat that sank in the Mediterranean. She noted that the Palestinian leadership “followed up on the developments of the tragic sinking incidents with the countries concerned, and will strive to provide all necessary aid and facilities as well as monitor the conditions of the refugees who survived the incident.”

In a telephone interview with Al-Monitor, Ashrawi did not deny that the PLO’s political and financial capabilities have been very limited for many years, particularly in matters relating to Palestinian refugees abroad.

“The PLO is in a truly unenviable position. We are trying to take action within the scope of available resources and expand every effort to help refugees abroad, despite the fact that they are subject to the authority of their host nations. The current situation in Syria is beyond our control, with the crisis causing suffering to both Syrians and Palestinians alike,” she added.

Ashrawi went on to say that she met with Malta’s Prime Minister Joseph Muscat in Ramallah to thank him for his country’s efforts to help the survivors. “We tried our best to shield Palestinians from the scourge of the internal conflicts raging inside their host countries. We talked to all belligerent parties in Syria and asked the refugees to refrain from committing actions that might come back to hurt them. We are also providing financial support, to the best of our abilities, to Palestinian refugees who have fled to Lebanon and Jordan.”

Hamas — through its leader in Gaza, Haniyeh — called on Palestinian refugees fleeing the ongoing fighting in Syria to come to the Gaza Strip, despite the fact that the Rafah border crossing remains closed and Egyptian authorities only allow Palestinians carrying identity cards to pass through.

Al-Monitor interviewed Refugee Committee Chairman Issam Adwan, who held Israel, Arab countries and the international community responsible for the boat-sinking incident and the death of the fleeing refugees aboard. He justified the Palestinian leadership’s inability to protect them because of prevailing political conditions.

He did, however, criticize the PLO and wondered, “Why doesn’t the PLO offer a safe haven to Palestinian refugees fleeing conflict areas? Why doesn’t it give them aid, instead of continuing to expand inadequate efforts to secure safe passage for them?”

Political writer Khalil Shaheen criticized the Palestinian leadership’s role, led by the PLO, for its slow response in dealing with the crisis engendered by refugees who attempt to reach Europe by sea.

In a phone interview with Al-Monitor, he said, “The fighting in Syria resulted in an exodus from the country. At the beginning, the PLO ignored the situation, maybe to hide its shortcomings and inability to act. Action came very late but has become adequate as of late.”

Palestinians constantly wonder how long they will have to endure the most difficult of conditions resulting from the Israeli occupation as well as their plight in the diaspora in light of the divisions that prevail between the various Palestinian factions, which have undermined those factions’ ability to provide them with protection and care.