Islamic Jihad has launched its summer camps, which include a military program for children, sparking internal Palestinian debate. 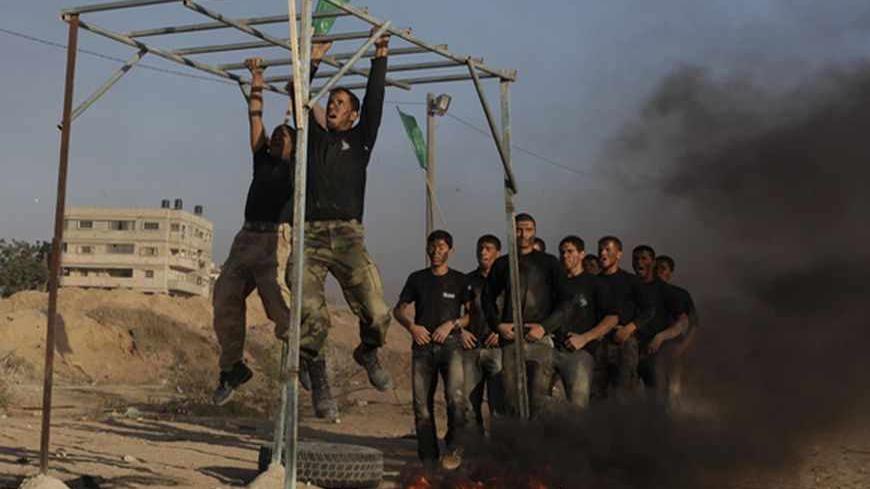 Young Palestinians take part in a military-style exercise during a summer camp organized by Hamas in Rafah in the southern Gaza Strip, June 13, 2013. - REUTERS/Ibraheem Abu Mustafa

On a military training site belonging to Al-Quds Brigades in the city of Rafah in the southern Gaza Strip, 12-year-old Musaab, wearing camouflaged fatigues and his face painted for combat, carried a Kalashnikov assault rifle as he took position with other similarly garbed children behind some barbed wire. They were simulating an attack on an Israeli military outpost, aimed at kidnapping one of its soldiers. The assault was subsequently followed by cheers and praise to almighty God for the success of their “military operation.”

This exercise came as part of a military parade that concluded the weeklong “Generation of Faith” summer camp, which targeted school children ages 12 to 17, and was organized by Islamic Jihad and supervised by its Al-Quds Brigades' military wing.

Musaab explained that, throughout the duration of the camp, they were trained to fire machine guns, assault military positions, kidnap soldiers, plant land mines, administer first aid, swim and maintain their physical fitness.

Speaking to Al-Monitor, he said, “I attended the summer camp with my 16-year-old brother Atieh because I believe in the importance of military training and in preparing myself to confront the enemy and defend the homeland. I await the moment when I will be able to fight in God’s name.”

Every year, during summer vacation, Palestinian factions and some international and civil organizations organize summer camps for children. And year after year, the debate re-emerges about the appropriateness of politically mobilizing children and young people, as well as giving them military training in camps that compete with those organized by international organizations, particularly the United Nations Relief and Works Agency for Palestine Refugees (UNRWA).

Islamic Jihad organizes two types of camps for children and youth in the Gaza Strip. The first is of a purely military nature; it attracts 100 kids exclusively from the city of Rafah, and is titled “Generation of Faith.” The second camp is called “Victory Generation,” and does not involve any military training, but focuses on scouting activities and amusement.

One of the Rafah summer camp supervisors, Hazem al-Amassy, said in an interview with Al-Monitor, "The camps aim at instilling a culture of victory and teaching children about combat and how to adapt to war in the event of a military confrontation.” He added, “It is our duty to prepare the rising generation for the impending confrontation with the Zionist enemy; for the battle will be lost if readiness is not attained.”

Amassy explained that Islamic Jihad organized “victory camps” that catered to 400 students and focused on providing them with cultural activities, entertainment as well as marksmanship training, security awareness and advice on the dangers of social networking sites and drug use.

Islamic Jihad’s military camp for children has renewed internal Palestinian debate over its appropriateness, with human rights activist Mustafa Ibrahim warning such camps have “negative repercussions.” Ibrahim told Al-Monitor, “We are allowing Israel to exploit these camps and mobilize international public opinion against the Palestinian people, not to mention the increased levels of violence that these camps cause among children under the age of 8 and the negative repercussions engendered by that on society as a whole."

Hamas also organizes its own monthlong summer camps. These began on June 9 and will last until July 9. Nearly 100,000 students attend the camps, 63,000 of them males ages 10 to 22, according to Hamas’ Central Summer Camp Committee Chairman Moussa al-Sammak. But Hamas seemed more cautious than Islamic Jihad in giving military training to children under the age of 16.

In an interview with Al-Monitor, Sammak said, “Summer camps are entertaining and include scouting and religious activities.” He maintained that children under 16 are not given military training, but are educated intellectually, militarily and politically.

Through their summer camps, Palestinian factions aim to attract youth and influence their political and intellectual proclivities, because the “war against occupation requires young people.”

An Islamic Jihad leadership figure, Ahmad al-Moudalal, who is also responsible for the summer camps, told Al-Monitor, “We are resistance movements. It is therefore normal for us to want to attract young people, instill the culture of resistance in their minds and prepare them to bear arms against the Israeli enemy.”

The financial crisis suffered by Palestinian factions has had its effect on their plans to expand summer camp activities. For a while, Moudalal and Sammak refused to disclose the budgets allocated for these camps; Al-Monitor has learned, from sources that requested anonymity, that this year’s Islamic Jihad camp budget did not exceed $20,000, compared with $150,000 spent last year.

UNRWA, whose summer camps were shut down last year due to a lack of funds, relaunched them this year after receiving a $2.5 million donation from the Finnish government. It should be noted that organizing summer camps cost UNRWA nearly $10 million in 2011.

UNRWA’s camps this year will go on for three weeks and will be held in various regions of the Gaza Strip. They will attract 150,000 12- to 15-year-old male and female students, who will be supervised by 2,000 unemployed Palestinians specifically hired for the job. UNRWA spokesman Adnan Abu Hasana told Al-Monitor that Palestinian children from the poorest Gaza Strip families needed to have fun, play and unload themselves emotionally, especially in light of the Israeli siege and poverty suffered by their families.

“There are no green spaces in the Gaza Strip, no playgrounds for poor children to play in; that is why UNRWA strives to create spaces for them where they can play, be kids and forget the toll exacted on them by the occupation, siege and poverty,” he said.