Al-Quds Brigades, the military wing of Islamic Jihad, concluded its summer training camps with the participation of more than 2,000 boys ages 14 to 17, who received military training simulating a confrontation with the Israeli army. 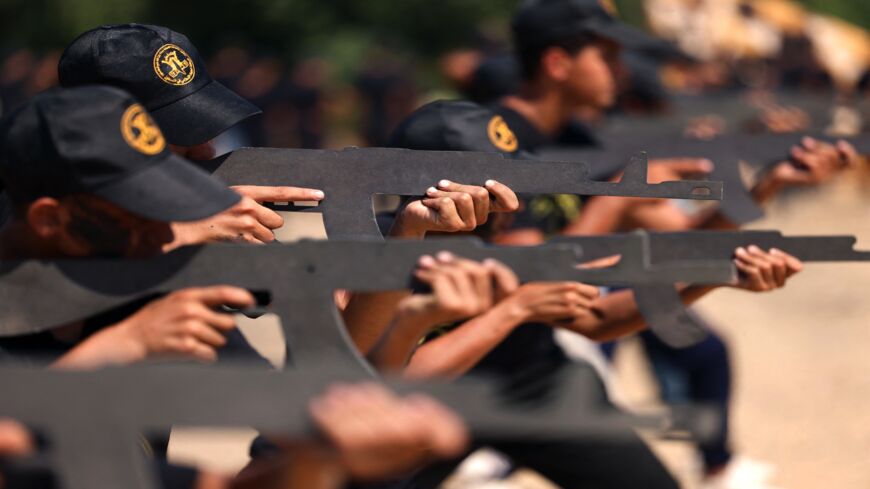 Others competed on iron obstacles and then jumped over burning tires, executing the instructions of masked members affiliated with al-Quds Brigades, the military wing of the Palestinian Islamic Jihad.

These children were performing during the conclusion of al-Quds Brigades’ summer training camp in Gaza City on June 30. The camp began on June 26 at the movement’s Buraq military site south of Gaza City, with the participation of more than 2,000 boys aged 14-17.

The graduation ceremony was attended by a number of political and military leaders of the Islamic Jihad.

The Islamic Jihad launched voluntary registration for boys on June 17 through registration points it had set up in several mosques in Gaza City. The summer camp was dubbed Sword of Jerusalem in reference to the recent confrontation the Islamic Jihad fought against Israel alongside other Palestinian factions, most notably Hamas, on May 10-21.

Although the Palestinian factions, most notably Hamas and the Islamic Jihad, organize such camps every year during the summer vacation for students, the number of participants this year was significantly higher. The resistance factions attributed this huge turnout to the “big victory” they believe they achieved against Israel in the last confrontation.

Similarly, Izz ad-Din al-Qassam Brigades, Hamas’ military wing, launched on June 26 its military Vanguards of Liberation summer camps. The first phase of the camps, held in Saraya Square in the center of Gaza City with the participation of thousands of boys, ended on July 1.

Of note, the Islamic Jihad is organizing similar camps in other cities of the besieged enclave that will continue until July 15.

Ahmed al-Rai, spokesman for the Sword of Jerusalem camps, told Al-Monitor, “These camps are not only of military nature. They include cultural and recreational activities. They aim to entrench the Palestinian cause in the minds of Palestinian youths and to consolidate the achievements of the recent military confrontation with Israel, during which the resistance was able to bombard Tel Aviv with hundreds of rockets.”

Rai explained that these camps also teach the younger generation about the most prominent operations of the Palestinian resistance and its battles against Israel over the past years, and they instill in the youth the love of resistance and jihad.

These camps carry a message to Israel that the Islamic Jihad, along with all Palestinian factions, is always getting ready and mobilizing to wage more battles against it, he said. “The Sword of Jerusalem battle was the beginning of our future battles with Israel, leading to the end of its occupation of our Palestinian lands."

Abu Firas, a pseudonym for one of the camp’s trainers, told Al-Monitor the boys in the camp received military training on how to raid military sites and move in difficult field conditions, and they also learned how to use firearms.

The boys were not coerced into taking part in this training camp, he said. They joined it of their own free will and with the consent of their parents.

Abu Firas said, “Those boys witnessed during the last confrontation the Israeli crimes that targeted civilians, and they saw children their age getting killed by Israeli bombs. They want to be ready to confront the Israeli army when they grow up.”

Al-Monitor interviewed many children who received training in this camp, many of whom lost one or more of their relatives during the recent confrontation between Gaza and Israel.

Mohammad Radi, 14, said, “Israel killed my cousin, Yahya Khalifa, who is my age, near his house east of Gaza City. He did not pose any threat or danger to it. I joined this camp to release my anger after the murder of my cousin, who was my best friend. I aspire to become a fighter against Israel when I grow up.”

During the recent confrontation, Israel killed 259 Palestinians, including 66 children, according to the latest statistics issued by the Ministry of Health in Gaza.

Adham al-Ayoubi, 17, and his younger brother Mohannad, 15, from Gaza City, participated in the Islamic Jihad camp. Adham told Al-Monitor, “Israel destroyed our house in the last war on Gaza. We were living in real terror and we did not feel safe. We wanted to learn how to shoot because that would make us feel safer.”

Ramez Abu Aser, 48, from Gaza City, has three children who participated in this camp. He told Al-Monitor, “While the children of the world spend their summer vacations in recreational camps, the Palestinian children have no choice but to join military camps. Israel has destroyed all forms of life in Gaza.”

He continued, “Years ago, my three boys would get music lessons during their summer vacations at the Al-Mishal Cultural Center in Gaza City. Israel destroyed the center in August 2018.”

“I hope the Israeli occupation will end one day and we can finally have peace. When that happens, our children won’t need to participate in any military camps,” he concluded.