Al-Qassam Brigades and Hamas have set up camps across the Gaza Strip where future generations of Palestinians can receive training on the Palestinian cause, the proper use of firearms and fighting Israel. 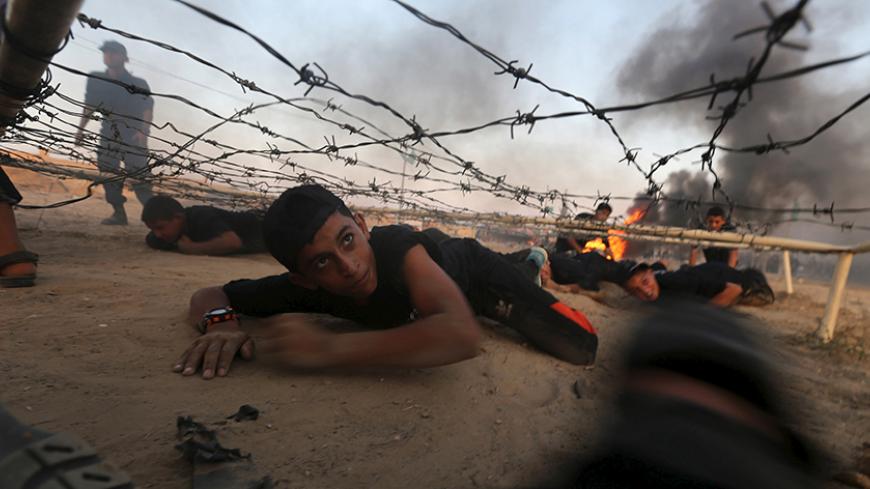 Young Palestinians crawl under an obstacle during a military-style exercise at Liberation Youths summer camp, organized by the Hamas movement, in Rafah in the southern Gaza Strip, Aug. 1, 2015. - REUTERS/Ibraheem Abu Mustafa

Despite its financial crisis, Hamas is funding numerous summer military camps to train the next generation of Palestinian fighters and to maintain the group's popularity, especially among youths.

Izz ad-Din al-Qassam Brigades, the armed wing of the Hamas movement, in June began registering Gazans for the camps, dubbed the Vanguard for Liberation camps. Registration took place in mosques and al-Qassam military sites and targeted several age groups between 17 and 60. The camps were held from July 25 to Aug. 1. According to an official affiliated with the camps, 30 such sites were organized across the Strip.

A total of 25,000 campers were distributed among the provinces of Rafah, Khan Yunis, Deir al-Balah, Gaza and Jabaliya. Over the span of seven days, they received basic combat training and sat for lectures on the Palestinian cause.

Al-Monitor obtained an exclusive copy of the summer camps’ organizational plan set by Hamas for this year. The plan was implemented by al-Qassam, Hamas' public action department, and the Islamic Bloc in line with the tradition set out by Hamas since its inception in late 1987.

Al-Qassam launched similar summer camps in January that were attended by nearly 15,000 men.

Young men ages 13 to 18 form the largest segment of camp enrollees. These teens witnessed the Israeli wars on Gaza in 2008, 2012 and 2014, during which the Israeli army killed several hundred children. They are well aware of the war and have witnessed combat firsthand. They are also aware that Gaza is constantly expecting Israeli wars and that al-Qassam is providing the training to recruit them into its ranks once they are physically fit.

On June 9, Hamas launched the Hamas Knights summer camps. Ayman Barud, who heads the Hamas camps in west Gaza, told Al-Monitor, “There are 850 campers ages 15 to 18 who were members of scouts missions and trained in first aid, civil defense and scouting.”

The Vanguard for Liberation camps and the Knights camps are different in that the former is open to Palestinians of all ages and participants are allowed to use firearms while training. The latter, however, is only for minors, and training is limited to lectures and awareness sessions with no use of firearms.

It seems Hamas is counting heavily on Palestinian youths to enroll in its ranks. Article 16 of Hamas’ charter issued in 1988 stresses the necessity to educate future generations, who will lead the upcoming military battles with Israel for the liberation of Palestine. It is on this principle that Hamas trains all of its cadres and members, particularly new members, and the military camps are nothing but a means to that end.

Al-Monitor attended drills in the military camps in some areas of the Gaza Strip.

Abou Jihad (a pseudonym), head of military training in the camps, told Al-Monitor, “There was a heavy turnout at these camps despite high temperatures and humidity and the difficult training conditions.” He explained that the camps focus on security awareness, physical fitness, self-defense techniques during Israeli raids, military skills and shooting live ammunition. They also warn against the risk of being recruited by the Israeli intelligence service.

Abou Jihad said al-Qassam assigned hundreds of professional trainers to the camps. He added, “The camp's curriculum is divided into three phases: a pre-camp phase, the camp and the post-camp phase. An inventory of participants is available, and we do not require campers to be Hamas members or supporters of the movement, since these camps are not partisan camps.”

The use of live ammunition in the camps implies the availability of large quantities of bullets sufficient for the 25,000 campers despite the war materiel it used up or that was destroyed during the last 50-day war in Gaza.

Despite the large numbers of Palestinians enrolled in the camps, some Palestinians such as Moustafa Ibrahim, a researcher at the Independent Commission for Human Rights (ICHR), warn against what they call the forced militarization of the next Palestinian generation. They worry that such action could lead to a mainstream culture of violence and give Israel excuses to target Palestinian children, who show up at these camps carrying weapons.

Al-Monitor attended a ceremony organized Aug. 6 by al-Qassam Brigades in Gaza City's al-Katiba Square to mark the end of the summer camps in Gaza City. Thousands of people attended the ceremony, during which campers demonstrated military exercises by shooting with various types of weapons. They also showcased their ability to disassemble and reassemble weapons and stage disembarkation scenes and infantry parades.

The movement opened the Nukhba Generation camps Aug. 1. Hamas spokesman Sami Abu Zuhri told Al-Monitor, “Fifty thousand boys and young men are taking part in these camps, which embody the military model of al-Qassam Brigades that defeated the Israeli army in the Gaza war in 2014. The camps target students in the primary, elementary and high school stages, as well as university students, and run for a month until early September.”

Hamas organized a ceremony Aug. 11 in the Gaza Strip for graduates of the all-female First al-Quds Army camp, which Al-Monitor also attended.

Mahmoud al-Zahar, a member of the Hamas political bureau, said in his address during the ceremony, “Hamas now has seven fighting brigades making up an army to liberate Palestine from the Israeli occupation, and each brigade includes several battalions. Hamas today has a regular Liberation Army trained with the latest training methods.”

Hamas sought to confer on the summer vacation in the Gaza Strip this year a military character, par excellence.

It is worth mentioning that there are no accurate statistics on the financial support and logistics Hamas provides for these scout, military and educational summer camps. This confirms that the movement believes the camps are part of its political program and strategic plan in Palestinian society.

by Murielle KASPRZAK and Joseph SCHMID | AFP | May 26, 2022
END_OF_DOCUMENT_TOKEN_TO_BE_REPLACED