The Vanguards of Liberation camps, previously organized under the supervision of the Education and Interior Ministries in Hamas-run Gaza, are now under the control of the Izz ad-Din al-Qassam Brigades, which some think might be using the camps to recruit young men as fighters. 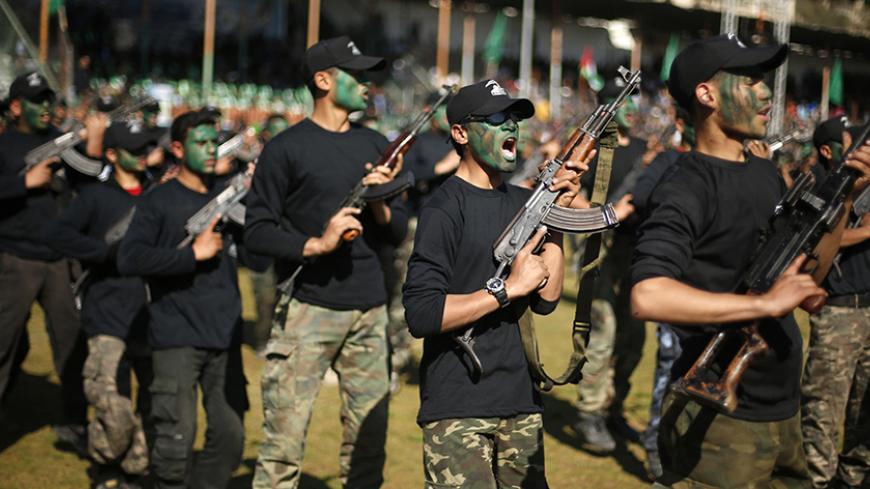 Palestinian youths hold weapons during a military-style graduation ceremony after being trained at one of the Hamas-run Liberation Camps, in Gaza City, Jan. 29, 2015. - REUTERS/Suhaib Salem

GAZA CITY, Gaza Strip — On Jan. 20, less than six months after the end of the most recent Israeli war on Gaza, Hamas relaunched Vanguards of Liberation camps for youth ages 15-21. Some 17,000 young men graduated from this camp Jan. 29 to form, according to the movement, the nucleus of the next Liberation Army.

Zakaria al-Hour, general director of educational activities at the Ministry of Education, told Al-Monitor, “We are now affiliated with the reconciliation government, which did not provide us with financial benefits, nor operational or administrative orders, and thus the ministry could not organize the Vanguard of Liberation camps this year." Hour said that instead, the Izz ad-Din al-Qassam Brigades organized the camps on its own. “Due to the lack of funds, other parties [the brigades] took it upon themselves to establish this program, which was affected by political issues,” he stated.

In 2012, the Hamas Ministry of Education inaugurated Futtuwa, a program offering young males training in security skills while exposing them to religious sermons during school hours. In 2013-14, the program became the Vanguards of Liberation military camps, organized by the Ministry of Education in cooperation with the Ministry of Interior. The camps now organized by the al-Qassam Brigades are held over a period of seven days during the midterm and summer school vacations, attracting some 13,000 students.

Hamas leader Ismail Radwan told Al-Monitor, “The purpose behind the Vanguards of Liberation camps this year is to prepare the [young] generation to protect its dignity. It is a message to the entire world that the Palestinian people will not give up on its right to resistance and that nothing can break its resolve.” He further explained, “It is true that we are no longer in the government, but Hamas has the right to take these generations under its wing and train and raise them.”

Registration for the camps was different this year compared with previous ones, as a number of masked al-Qassam Brigades members assembled in the main squares and streets of Gaza to register participants, who turned out in impressive numbers. Hamas had previously used mosques for such activities, but many suffered damage in the last war. Seventy-three mosques were completely destroyed, most receiving warnings to evacuate the premises, and 197 mosques were partially destroyed, according to the Ministry of Endowments and Social Affairs in Gaza.

On a small hill overlooking the sea near the Wadi Gaza Bridge, separating Gaza City from central Gaza, the famous training facility of the al-Qassam Brigades was turned into a camp where the Vanguards of Liberation received martial arts and self-defense training. Two masked guards allowed Al-Monitor’s correspondent to enter the premises, which were surrounded by reinforced concrete walls and barricades decorated with the movement’s green flags and jihadist slogans.

The teenagers inside were divided into different groups for training. In one of these groups, around 50 young men stood in a circle around their trainer, each with an unloaded light weapon, following the leader's instructions on how to use them. Between the groups lay circular rock formations surrounding a number of small rockets. Additional groups were training outside the camp in a sandy area of the valley.

Al-Monitor attempted unsuccessfully to obtain permission to conduct interviews inside the facility. The camp administrator apologized for our not being able to do so or to take pictures in the camp, a situation he attributed to "superior orders." The al-Qassam Brigades’ media office also denied Al-Monitor’s request and those of all other new media in the Gaza Strip for permission to enter any of their locations to conduct interviews. The office even refused to issue a statement on the number of participants in the training program, only posting pictures of the camps on Facebook and its official website.

Al-Monitor, however, managed to speak with Yahya (a pseudonym), 15, who had been on his way back from a Vanguards camp south of Deir al-Balah. “I registered with an al-Qassam member in Deir al-Balah’s downtown without discussing it with my parents. It was after the imam encouraged us to join during prayer at the mosque,” he said. “I am really happy there. We are being trained to have military skills, such as shooting live bullets, and scout skills. We receive religious sermons and first aid instructions,” he added.

Yahya’s father, a 38-year-old Fatah supporter, expressed his objection to his son’s participation in the Hamas-affiliated camps. “Although he survived the Jews’ shelling, he might not survive recruitment and brainwashing. But his mother insisted that he join the camp,” he told Al-Monitor.

Yahya’s mother, 34, explained to Al-Monitor, “We fight every day because I agreed to his participation. I fear for my son, but I accepted him [joining the camp] so he could learn good ethics and self-defense and stay out of the street. He has too much free time on his hands because there are no sporting grounds and no electricity.” Both parents spoke on condition of anonymity.

Meanwhile, Yahya’s friend, Mohammad, 15, spoke openly of his dream of joining the brigades. He said that during the last war, Israel shelled his home and killed his brother, who was a member of the militia.

The Education Ministry had once been tasked with training students in physical and mental fitness as well as in how to use explosives and weapons. Since it did not lead the camps this year, it cannot monitor them and therefore know whether the brigades hope to recruit members through them. “Things are now in the hands of the people responsible for this project. They have the answer to such a question,” Hour said.

Dardah al-Shaer, a psychologist, said to Al-Monitor, “These camps allow psychological discharge, and the deflection of the youth’s latent physical energy. This method does not promote the negative aspect of the concept of revenge. It is rather a way for moral mobilization for jihad, self-defense and the defense of honor and land.” He argued, “We cannot mobilize the youth against Israel more than the last war on Gaza did.”

While Hamas encourages attendance at such training camps, in December 2014 the Ministry of Interior prevented a group of children orphaned by the war from going to Israel on what Hamas described as a trip of “normalization” and “changing facts,” arranged by peace activists.