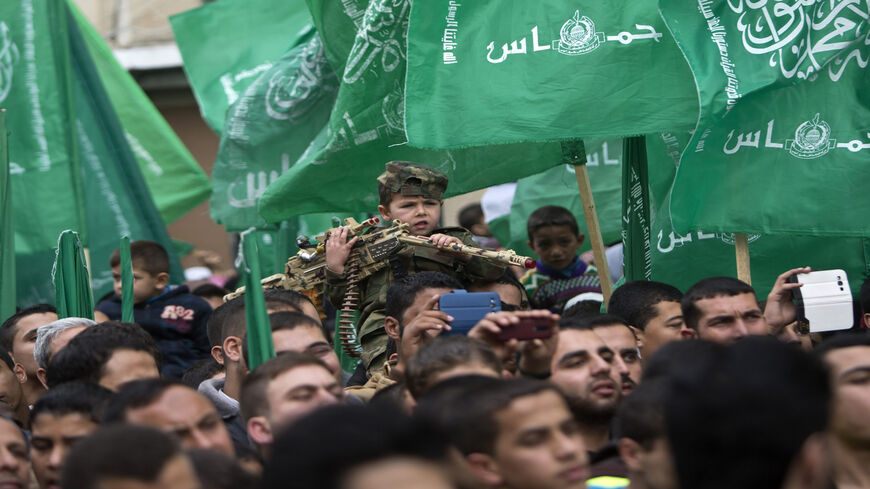 Al-Qassam Brigades have been organizing these camps since 2012 with the aim of mobilizing a generation of young people capable of fighting wars against Israel to liberate the occupied Palestinian territories.

On June 13, al-Qassam Brigades announced the beginning of registration in the camps for preparatory, primary and secondary school students, and university students. It allocated a full week of military, physical and scout training for each category of trainees.

Abu Bilal, spokesman for the Vanguards of Liberation camps, announced during a press conference held by al-Qassam Brigades at the Yarmouk military site, east of Gaza City, the launch of the monthlong camps, “We dubbed it the ‘Sword of Jerusalem’ to symbolize what our people achieved during the recent escalation in Gaza. It is a generation that carries this sword to strike the enemy and liberate Jerusalem.”

He stressed that al-Qassam Brigades organizes these camps out of belief in the role of the youth and to honor its responsibilities toward the younger generation, who all parties are trying to lure or mislead, but who have repeatedly proven a high degree of awareness and patriotism.

He said that the goal of these camps is to instill national values ​in the youth, enhance the values ​​of courage, hope, pride and belonging to Jerusalem, and prepare for the stage of liberation and return.

Qassem noted that the camps this year convey a clear message to Israel that Hamas is constantly preparing for the liberation battle.

He pointed out that the programs vary based on different stages, as light physical training is provided to young boys to enhance their fitness levels. They are also taught how to use primitive tools of self-defense. According to Qassem, the training camp also offers participants a general military culture about different types of weapons, teaches them how to dismantle weapons and deactivate some harmful materials, and trains them to shoot. These are basic components that will help participants fight the Israeli occupation, he continued.

“Gaza is exposed to many wars, so we are keen for participants to learn how to defend themselves and deal with emergency situations and crises,” he said.

Qassem explained that the Vanguard of Liberation camps witnessed a heavy turnout this year, with tens of thousands wanting to register. This, he noted, shows the growing popular and public support for the resistance.

“The numbers are still not final as registration is still open for the next group of participants. We are still recruiting younger participants,” he added.

He pointed out that last year, the movement did not organize the camps due to the coronavirus pandemic.

Regarding the financial hardship that Hamas is going through, and its insistence on organizing the camps shortly after the latest escalation, during which hundreds of rockets were fired, Qassem stressed that the cost of the camps is not exorbitant, as the trainers are volunteers and the practical exercises take place at the military sites of al-Qassam Brigades.

Al-Monitor contacted al-Qassam Brigades to ask about the budget allocated to these camps, but they stressed that such military and security information is not made public.

Khalil, 12, from Gaza City who joined the summer camp for the first time, told Al-Monitor, “I will participate in the camp in order to strengthen myself and learn self-defense skills so I can fight Israel, become a martyr and go to heaven.”

He said, “I was very happy to learn that registration for the camps was open, and I rushed to register after I managed to convince my family."

He said that participants will receive crawling and shooting training.

Mohammed, 14, told Al-Monitor, “I joined the camp in order to defend my land against Israeli attacks and subsequently join the ranks of al-Qassam Brigades.”

He stressed that although his family does not belong to Hamas, they let him join the camp for the second time — the first time was in 2019.

“I don't find the training to be hard or inappropriate for my age. On the contrary, I want to learn more martial arts,” he said.

He pointed out that he learned how to dismantle and load weapons and shoot. He also received scouts and physical training.

Ibrahim al-Madhoun, a political analyst close to Hamas, told Al-Monitor that Hamas wants to instill national and moral values ​​in the new generation while enabling it to face difficulties and dangers.

“The last battle raised the level of patriotism among Palestinians, which encouraged Hamas to organize the camps as soon as the battle ended,” he said.

Madhoun noted, “The Gaza Strip is besieged and there are no recreational places for people to go to. So it was necessary to organize camps to occupy the people with matters of national and moral interest while keeping them away from nihilism and depression.”

He stressed that the summer camps aim to relieve some of the stress resulting from the war and help children who witnessed horrors. He pointed out that the high turnout for the camp this summer indicates that the Palestinian people have come to realize that liberation will only take place through military resistance.

“Hamas is defying Israel and publicly saying that it has the right to develop itself and increase the size of its army, all the while aspiring for a new generation capable of producing weapons and missiles,” he added.

He said that al-Qassam Brigades operate according to the principle of general popular mobilization, similarly to all peoples under occupation, and stressed that Hamas opens the door to voluntary accession, unlike the Israeli army, which forces its citizens into conscription.

Madhoun concluded that the financial hardship Hamas is going through is further pushing it toward enhancing the military and national capabilities of this generation, which is among the movement’s priorities.