Inside one of Hamas' youth training camps

Hamas’ military wing has started organizing youth camps across Gaza to train the younger generation to defend itself and fight the occupation, some say promoting a culture of violence among the youth. 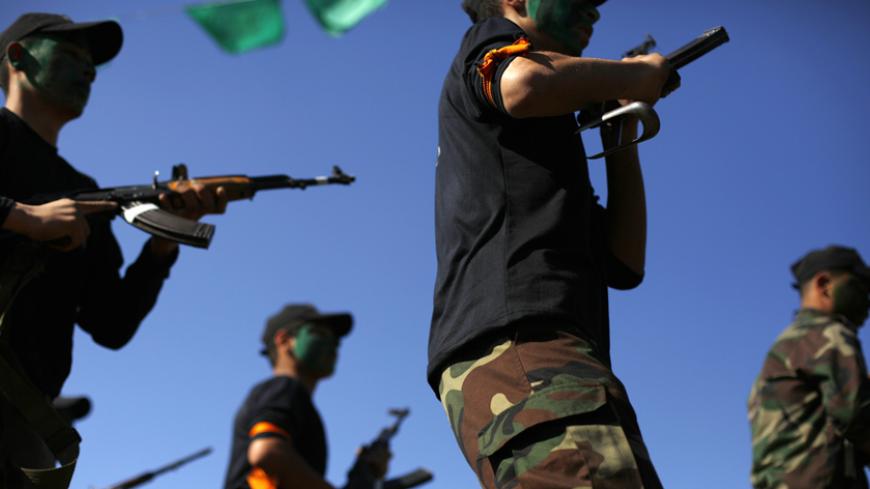 GAZA CITY, Gaza Strip — Most of the military training sites of the Izz ad-Din al-Qassam Brigades, which can be found in many places in the Gaza Strip, have been turned into military training camps for thousands of Palestinian youths for an entire week during the midterm school holiday.

“The vanguards of liberation camps,” which are organized by Hamas’ military wing, have witnessed for the first time a large number of young men participating amid diverging views as to the goals behind these camps and their benefit to the young trainees, while the Gaza Strip is going through harsh economic and political times.

In the west of Gaza at the Badr military site of al-Qassam Brigades, training camp participants were divided into two shifts — a morning and an afternoon shift — during which they train for four hours daily under the supervision of the brigades' officials.

Al-Monitor was present at the Badr site, where the model of a locally made rocket stood, when trainees were divided into groups and deployed on-site. Trainers were busy distributing Kalashnikovs among the youth to train them on how to fire the assault rifles.

“These guns make men. This is how Palestine will be liberated. You are the army of the future,” Abu Hamza, the camp supervisor, said while addressing the trainees.

In an interview with Al-Monitor, Abu Hamza said, “We are planting the first seed of the liberation army. We have organized similar camps in the past, but this is the first time we receive such a large number of trainees at al-Qassam Brigades’ military sites.”

He added, “We are trying to take the initiative to strengthen the determination of these young men, and instill a culture of resistance in their minds — to nurture and motivate. We live in an occupied land. If there were to be an invasion in any area, young men would be ready to defend themselves with weapons and grenades."

The Gaza Strip has been witnessing political instability following the war in 2014 that lasted 50 days, killing thousands of people and destroying thousands of homes and industrial facilities, as a result of the political conflict between Hamas and Fatah. This is not to mention that the reconstruction devised and supervised by the United Nations is progressing very slowly.

A Hamas leader told Al-Monitor on condition of anonymity, “The resistance is popular among Palestinians regardless of political circumstances, which prompted the [Hamas] movement to strengthen its position among Palestinians through these camps.”

He said, “The camps aim at strengthening the culture of resistance among all Palestinians, because we believe that resistance is a strategic option and must be preserved. We also count on the younger generation in the coming years and we would want to shelter young people against any other plans."

The source added, “We are mobilizing our young people so that the Fatah movement would not take any measure in this regard. As for Israel, our message is clear by means of these camps. Although there is no military work on the ground, the general mobilization among the Palestinians for resistance is ongoing.”

Although Hamas invited Palestinians to attend the graduation ceremonies in Gaza City and Khan Yunis on Jan. 29, the events were not well attended, except for the presence of Hamas political and military leaders. This reflects the worsening situation people in Gaza are dealing with in their everyday lives since the end of last summer's war.

During the graduation ceremony, which Al-Monitor attended, Khalil al-Hayya, member of Hamas’ political bureau, delivered a speech addressing the audience. He said, “Although al-Qassam Brigades have been busy with preparations following the victory in the latest war, they have refrained from training the younger generation for a future liberation.”

He added, “We are preparing this generation for Jerusalem, the West Bank and Palestine."

Hamas and its military wing is under pressure at home especially with regard to its relations with its political opponent, Fatah. This is in addition to the pressure by Israel and the ongoing blockade on the Gaza Strip, in light of the turmoil in the Arab countries and changing alliances.

The member of the committee supervising the camps told Al-Monitor, “We are seeking to ignite the flame of jihad in the liberation generation and prepare a victory army. We are in an ongoing battle with the occupation forces. We will not heed any criticism, as we are in a constant state of war and we have the right to defend ourselves through all means available.”

Ibrahim al-Madhoun, political writer and director of the Hamas-affiliated Center for Future Research in Gaza, said, “We have taken a very carefully studied step, which was made at the right time. Al-Qassam Brigades have proved to be a strong military institution, capable of pulling off such a great project, in terms of quantitative and qualitative force and development.”

He said on the topic in a media interview, “After the brigades’ success in the latest war, they have been asked at home and abroad to join the ranks of the resistance. These camps could pave the way for building a popular army that would include the various segments.”

For his part, political writer Mustafa Ibrahim criticized the training of young people to take up arms, which he feels promotes a culture of violence, depriving children from enjoying their holiday.

In an interview with Al-Monitor, Ibrahim said, “Building a generation of vanguards is not made at the hands of military men by training them to take up arms. We have a large army of vanguards of ignorance, backwardness and fear.”

He added, “The rights of people, children and the poor ought to be reinstated. The right to work and education should be the title of hope and the cornerstone for the future. We should raise awareness among people to help them accept differences and train them to accept others, and to think as individuals outside the herd."

Hamas is suffering from the conflict with its rival, Fatah, in light of the political deadlock regionally, as it finds itself forced to hand in the government in Gaza, which the movement has been running for the past seven years.

This is not to mention the deteriorating situation of its population given the poor economic and political conditions in the Gaza Strip. Thus, the movement seeks to support its political stance through the promotion of a “culture of resistance,” among young people, as it has always been popular for its military actions against Israel.