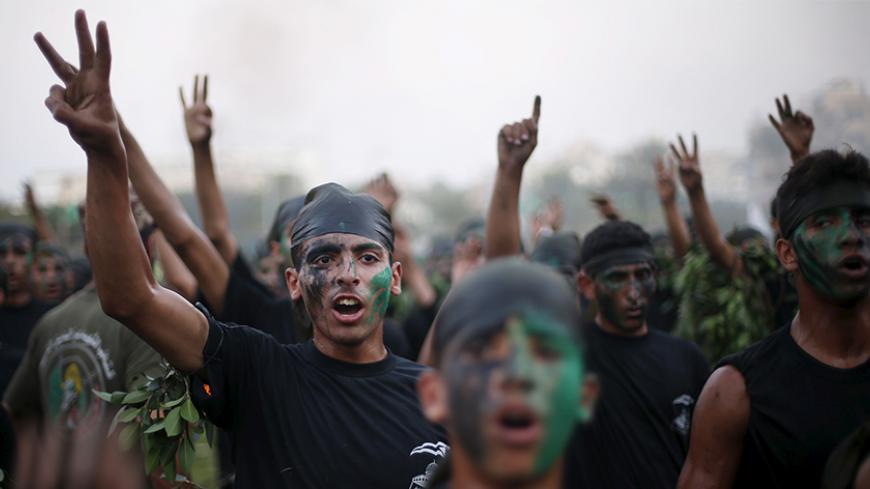 GAZA CITY, Gaza Strip — It is now obvious that since the end of the recent war in the Gaza Strip, Hamas' military wing, Izz ad-Din al-Qassam Brigades, has been carrying out popular action and field activities instead of Hamas’ political wing, which had handled direct communication with the Palestinian people in the Gaza Strip over the years. Hamas’ military wing took it upon itself to organize military training camps for boys and young men dubbed the “vanguards of liberation camps” during the students’ midterm break in January and during their summer vacation in August.

Almost daily in most regions in the Gaza Strip, al-Qassam Brigades militants perform military parades at various times over the day and the night. Masked militants hold light weapons and some of them even hold miniature versions and even samples of missiles and aircraft that al-Qassam Brigades claim to have developed and manufactured locally and used in their confrontation with Israel.

A well-informed source in the Hamas leadership confirmed to Al-Monitor on condition of anonymity that al-Qassam Brigades decided to take over communication with the public from Hamas’ political wing, using various field activities — including military parades and training camps — to show off their capabilities.

The source told Al-Monitor, “Hamas made a decision to put its military wing at the forefront and to entrust it with communication with the public instead of its political wing in order to promote the movement’s politics and popularity in the Palestinian street. Al-Qassam Brigades are Hamas' most prominent organization and are not criticized by the public, like Hamas’ political wing.”

It should be noted that Hamas has a special Popular Action Department in charge of implementing popular activities and organizing mass rallies, summer camps and other activities.

The same source explained that Hamas was adopting a certain approach to attract young people through its preaching department, which is usually concentrated in mosques scattered across the Gaza Strip to train these young men. Afterward, some of them are transferred to the military wing. The source said, “This approach has changed today. Today we aim to attract young people through summer camps organized by al-Qassam Brigades and then we refer them to the preaching department, which contributes to their educational upbringing, contrary to the previous approach that was more time-consuming.”

The source added, “Few young men are attracted through mosques and the preaching department, but through al-Qassam Brigades summer camps and other popular activities, attracting young men became faster and more effective. Al-Qassam Brigades need fighters, not preachers, since there is a shortage in fighters as a result of successive wars. This shortage must not only be compensated for, but rather the number of fighters must be increased.”

Al-Qassam Brigades did not officially announce the number of their fighters killed during the 50-day war, but the Palestinian Center for Human Rights stated that more than 670 out of the total death toll of about 2,200 were fighters.

In this context, another source in al-Qassam Brigades' leadership told Al-Monitor on condition of anonymity, “The decline in the number of fighters is not only due to wars and military confrontations, but there is also the time factor. Members are getting older and no longer physically fit to serve as fighters on the front lines. We are in dire need of younger fighters. Summer camps are a very suitable place to get to know young people and practically test their abilities, physical strength and desire to become militants before they join the military wing.”

Al-Qassam Brigades puts up large signs at the entrances of neighborhoods of the five main cities in the Gaza Strip to praise the capabilities of the military wing and its members during the latest war. Sculptures of locally-manufactured missiles and aircraft are placed in key squares. The organization's information office periodically publishes stories and footage of their members fighting during the war, defeating the Israeli army and killing a number of its soldiers.

Another Hamas source said these signs and sculptures, as well as the stories, aim to keep Palestinian citizens in the resistance frame of mind and preserve the prestige of the military wing. The source asserted, “To preserve the resistance flame and maintain the favorable popular environment, the Palestinians must be constantly reminded of al-Qassam Brigades' creativity, including the training of its members, their selfless bravery and their capabilities to face the enemy. The sculptures are a historical representation of these capabilities.”

It should be noted that the Hamas movement has controlled the Gaza Strip since June 2007. During this period, its military wing fought three wars with Israel, claiming victory in all of them, and each year celebrates their anniversaries to highlight its achievements.

The coastal Strip has been under a tight Israeli and international blockade ever since Hamas took power, leading to harsh criticism by Gazans of Hamas' limited ability to reduce poverty and unemployment and open border crossings with Israel and Egypt.

The Hamas leader said, “However, Hamas' military wing enjoys a large measure of respect and appreciation by the Palestinian public.” He added, “The government committed mistakes, showed a poor performance and provided deficient services. Palestinians have divergent positions on the Hamas political movement, but everyone inside and outside Gaza stands in awe before the efficient performance of its military wing during the war, especially in 2014, when it confronted the enemy and caused heavy losses in its ranks.”