Ties between Islamic Jihad and Hamas are under serious strain following the killing of an Al-Quds Brigades leader by Hamas police. 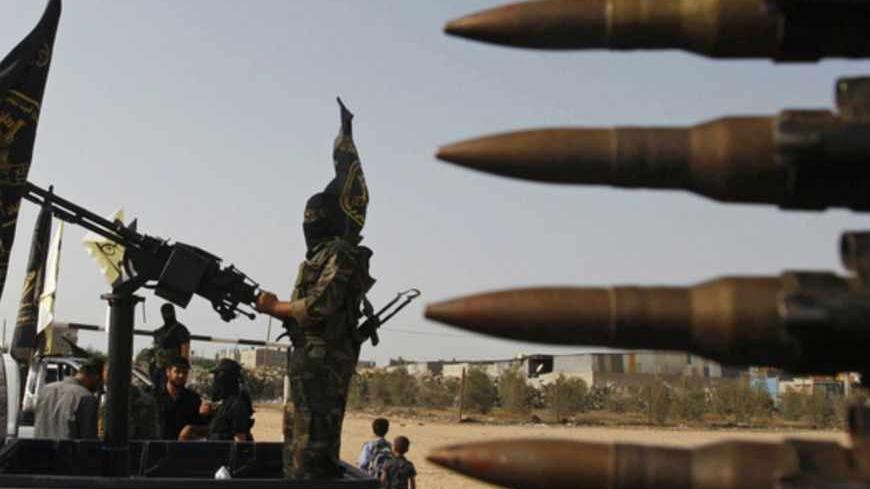 An Islamic Jihad militant rides on the back of a truck during a parade to mark the 25th anniversary of the movement's foundation in Rafah in the southern Gaza Strip, Oct. 2, 2012. - REUTERS/Ahmed Zakot

Islamic Jihad called on the Gaza government to dismiss Minister of Interior Fathi Hammad after Raed Jundiya, a leader of Al-Quds Brigades — the military wing of Islamic Jihad — was shot dead by a police officer following a raid on his house in the neighborhood of Shajaiya east of Gaza City. Islamic Jihad has further asked that Hamas bear responsibility for Jundiya's killing.

In an exclusive interview with Al-Monitor, Nafez Azzam, a member of Islamic Jihad's political bureau, said that the killing is a crime and irresponsible act committed by the police. He called on Hamas to assume responsibility and dismiss either the Interior Minister or police chief.

During a phone interview, Azzam said that it all began with a trivial incident concerning the resistance, but that the group was shocked to see scores of police officers head to Jundiya’s house without notifying Islamic Jihad, as per an agreement between the two movements.

Azzam said that Al-Quds Brigades denied launching rockets at Israel, noting that the movement is not an armed gang or militia, but a military faction responsible for its actions.

"Throughout the crisis, and during Jundiya's funeral, Al-Quds Brigades have not fired a single bullet, and they will not take their rights by their own hands. But at the same time, things will not be as they were before Jundiya’s death. Hamas must rectify what happened by dismissing the Interior Minister, who bears responsibility for what happened, whether or not he was aware of the murder. The police apparatus is under the jurisdiction of the Interior Ministry," he said.

A special source revealed to Al-Monitor that the incident is related to the disappearance of weapons belonging to a resistance group affiliated with Al-Quds Brigades, which caused an internal problem in the movement. As a result, the person in charge of arms was kidnapped for interrogation. The abductee’s family headed to the police and filed a complaint accusing Jundiya of kidnapping her son.

Azzam added, "We are keen on maintaining strong relations with all factions of the Palestinian people, and we have always sought to avoid tension. But what happened is a crime by all standards. Scores of armed policemen headed to Jundiya’s house, even though they know of the presence of a mechanism for communication and coordination with the movement. Jundiya was killed in cold blood."

"We want to know why the Interior Ministry acted in this way," he said.

Interior Ministry spokesman Islam Shahwan told Al-Monitor that the ministry "cannot make a comment on the incident or blame any party until the release of results by the investigation committee in the next few hours." He noted that the investigation committee consists of Palestinian Legislative Council (PLC) member Marwan Abu Ras, as well as representatives of Jundiya’s family, the Islamic Jihad, and the Ministry of the Interior.

Shahwan said that the police headed to the Jundiya’s family home following his failure to respond to two requests for him to appear before the Attorney General and the judicial authorities within less than a week. As a result, three members of the police — not scores of them — headed to his home.

Regarding claims that Hamas did not follow up with the Islamic Jihad on Jundiya’s court request, Shahwan said that the "charter of honor" signed by Islamic Jihad and Hamas within the framework of cooperation does not provide organizational cover for any criminal case. He added that "Jundiya had been accused of kidnapping a citizen. We do not want an internal problem to destabilize the security situation in the sector."

As for the demand to dismiss the Interior Minister or the police chief, he said that the Interior Ministry will bear part of the responsibility should the investigation committee prove that. He said that they are listening to all opinions since the government is not a party but serves all citizens. He said, "We are waiting for the release of the forensics report, which is with the Attorney General, as well as the results of the investigation committee. We assume any responsibility in this regard."

Israeli warplanes bombed at dawn on Monday sites belonging to the Al-Quds Brigades, the military wing of Islamic Jihad in Rafah, and tunnels on the border with Egypt south of the Gaza Strip. They also bombed empty land near the town of Asda in the city of Khan Younis, and other areas in Zawayda and Deir al-Balah in the Gaza Strip.

Eyewitnesses told Al-Monitor that they heard and saw locally made rockets being fired Sunday night from several areas in the Gaza Strip.

Shahwan said that the security units did not detect any launching of missiles. Al-Quds Brigades and other factions denied launching any rockets from the Gaza Strip. Shahwan held Israel responsible for any military escalation.

Shahwan added that "the Israeli occupation [forces] have been threatening to bomb areas in the Gaza Strip and target leaders for a week now. Two days ago, June 22, Israel accused Al-Quds Brigades of launching missiles, which later turned out to be military exercises being conducted far away from them. But Israel wants to take advantage of the situation and target Gaza. This escalation culminated in a statement by Avigdor Lieberman on Monday, June 24, in which he said that Israel should seize the opportunity and fully occupy the strip."

Azzam added, "We know that Israel is trying to take advantage of this atmosphere and aggravate the situation. It has gotten rid of a key figure of resistance like Jundiya."

At a press conference attended by Al-Monitor on Monday {June 24} Gaza Prime Minister Ismail Haniyeh confirmed the strong relationship with Islamic Jihad. He said, "What happened in Shajaiya is an exceptional incident in the course of the relationship, and no one can disturb it."

Haniyeh added: "Apart from the reasons and results that will be released by the investigation committee, I personally, and on behalf of the government, convey my deepest condolences to the Jundiya family and Islamic Jihad. I assure you that we feel your grief and your lives are our responsibility. We will seek to preserve the good relationship we have with you."

He continued, "Our relationship with Islamic Jihad is solid, firm, and based on [a commitment to] the line of resistance for the sake of Islam and Palestine." He added that his government in the past few hours intensified contacts with the Islamic Jihad leadership and elders from the Jundiya family in order to contain the situation and maintain the language of reason.