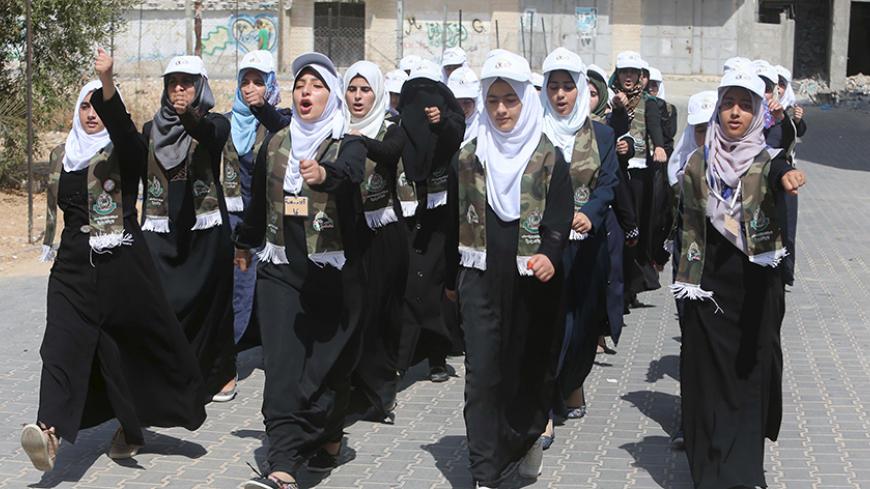 Palestinian girls exercise during a summer camp organized by the Hamas movement in Rafah in the southern Gaza Strip, Aug. 10, 2015. - REUTERS/Ibraheem Abu Mustafa

This camp, which ended Aug. 10, is the first of its kind in the Gaza Strip, as Hamas has never organized a female training camp before. Around 1,000 girls attend the camp, which offered a special curriculum to resist the occupation taught by women affiliated with the Hamas movement. These women enjoy extensive military experience and know how to intellectually mobilize people against the occupation.

Camp director Rajaa al-Halabi told Al-Monitor, “The goal of the First al-Quds Army camp is to prepare girls for self-defense and for future battles against the occupation.”

Halabi explained that the camp focuses on the psychological education of girls, who participate voluntarily. Training includes how to raise a new generation that embraces the culture of liberation and fighting the occupation and strengthening participants’ sense of patriotism and interest in preserving Palestinian rights.

The group of girls that stood in a schoolyard in the neighborhood of Ramla, in central Gaza City, seemed passionate about learning military techniques, just like participants of the yearly “Pioneers of Liberation” camps for men and boys from age 7 to 60 organized by Hamas since 2013. The girls’ leader worked to organize them into military formation and teach them about the basic military march.

In addition to the Ramla camp, other camps are spread across Gaza, such as Tuffah and al-Daraj in central Gaza City and Khan Yunis and Rafah in the south. Ghada al-Abed, the head of the training program of the camps in Tuffah and al-Daraj, said that the camp in Ramla is just one of several camps all held in schools Aug. 1-10 to build the capacities of participants and enhance their sense of patriotism.

Abed told Al-Monitor, “These camps target girls who have a school average of over 95%, the elites of Palestinian female students,” aiming to train role models for other students.

She explained that one of the first skills these girls learn at the camps is the military march, which teaches them discipline and order. Then they carry out activities and exercises designed to strengthen the girls’ faith that Jerusalem — a matter of conflict between Jews and Muslims for many years — rightfully belongs of Muslims only, not Jews.

Wafaa al-Sharbassi, 16, told Al-Monitor, “I joined the First al-Quds Army camp, and I am proud to be part of it. These camps grow the seeds of love of the nation and teaches us about our Islamic sanctities that are being blatantly violated, such as Al-Aqsa Mosque. They also strengthen our rights to defend our presence and resist the Israeli occupation.”

She added, “This camp revived our hopes to create a female army to liberate Al-Aqsa from the occupation. We learn about weapons and how to handle them, and we are ready to go through intensive military training for this purpose.”

Hiba Abu al-Laban, 13, told Al-Monitor, “I joined the First al-Quds Army camp because I hope women can play a role in the future liberation battle. We were also exposed to the Israeli lies about Al-Aqsa Mosque, such as the existence of Jewish artifacts under the mosque, which would give [Israel] the pretext to violate the mosque’s foundation and structure and destroy it.”

Abed added that among the camp’s activities is the war-of-words game. In this game, the girls are divided into two groups, one Palestinian and the other Israeli. A war of words starts between them, as well as an argument about the right to Jerusalem. The simulation ends with victory by the Palestinian team, which may not necessarily reflect actual developments on the ground, but trains them to think that way.

The coordinator of the First Al-Quds Army camps, Samiyya al-Helou, said that intellectual mobilization is the camps’ main tool for mobilizing girls against the occupation. This aspect is far more important than military training, according to Helou.

Helou told Al-Monitor, “We do not focus on military training as much as building the mind and increasing national awareness among these girls. We also focus on promoting historical Palestinian culture to reinforce the struggle against the conflict with the occupation. [The training] comes in the context of development and education, before moving to more advanced stages in preparing the girls for resisting the occupation.”

According to Halabi, the women’s movement supervising the camp first emerged in the early 1980s to stir a religious awakening among Palestinian women and promote religious values.

“The social conditions during this era had some extremely negative aspects, including how the Palestinian people coped with the occupation. Some go to Israel for touristic purposes, while others work in Israeli cities. This is why the female movement was created: to change the concepts of Palestinians, salvage their own identity, put them on the right path toward liberation and retrieve their rights,” Halabi added.

She also criticized the Western countries that frown upon the military preparation of Palestinians to confront the Israeli forces, saying, “The Western community always equates the victim and the executioner. But the peoples of the world should know that Israel is perpetrating bloody massacres against Palestinians, the most recent of which is the burning of toddler Ali Dawabsha in Nablus. Where is the international compassion for the Palestinians?”

Halabi clarified, “The female movement today took it upon itself to prepare Palestinian girls for the right moment to liberate Jerusalem and Palestine.”

She also asserted that in the near future, more of these camps will open “to strengthen the defensive skills of girls and to train them in new and various techniques, so these girls will be ready to confront anything our nation might face.”