In light of the recent Israeli Police and settlers’ attacks on Al-Aqsa Mosque compound and the Sheikh Jarrah neighborhood, Jerusalemite women have been remarkably present, taking part in the demonstrations and using social media to share the suffering of Jerusalemites. 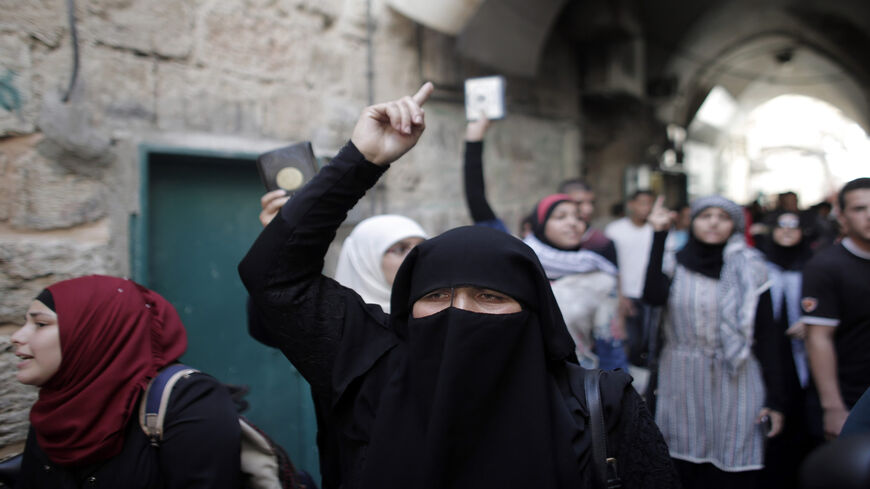 The Israeli Police and settlers’ fierce attacks on Al-Aqsa Mosque compound and the Sheikh Jarrah neighborhood in Jerusalem has shed light on the significant presence of Palestinian women in the city and their participation in demonstrations condemning the Israeli attacks. These women have also held the ribat, the act of defending Islamic holy places, at Al-Aqsa Mosque and used the hashtag “SaveSheikhJarrah” on social media to shed light on the developments there.

The participation of Jerusalemite women is an extension of the historic role they have played since the British Mandate for Palestine. In 1925, women had their first impactful movement, as they took part in the protest to condemn Britain's then-Foreign Minister Arthur Balfour’s visit to Jerusalem and plan to visit Al-Aqsa Mosque.

Since then, women’s organized political activity has witnessed a qualitative leap. Following the Buraq Uprising in 1929, a group of Jerusalemite women founded the Arab Women Union Society in Jerusalem, which was chaired by Zulaikha Shihabi. The union suspended its works for a while after 1948, before re-registering in 1957.

Abir Ziad, director of the Women's Revolutionary Center in Silwan, a neighborhood south of Al-Aqsa Mosque, told Al-Monitor that Jerusalemite women have played a prominent role in the recent developments, and that this is normal and a continuation of their approach to prioritize the protection of Al-Aqsa Mosque and East Jerusalem neighborhoods. They have managed to play this role despite the responsibilities they have and the multiple roles they assume at home and at work, she said.

Commenting on the top challenges Palestinian women face in Jerusalem, Ziad said that Jerusalemite women are subjected to acute stress, particularly those who have children and are under house arrest, which emotionally affects them and their children and prevents them from going to work or resisting against the Israeli occupation.

According to Ziad, women whose houses have been demolished by Israel since the occupation of Jerusalem in 1967 deal with a double disaster. They are required to assume several roles, including to care for their children and ensure they are safe and secure, while they have become homeless and displaced.

The main challenges facing Palestinian women in Jerusalem are the policies imposed by Israel against Jerusalemites, namely to impoverish them and push them to drop out of school. Women, specifically the murabitat, defenders of Islamic holy places, are constantly targeted by Israel, which also carries out random arrests and undermines their right to reunite with their families.

The murabitat at Al-Aqsa Mosque are a group of female activists who protect the mosque from the Israeli Police and settlers’ attacks. They have become well-known over the past years for their activism in defending the mosque and turning into a symbol for resistance. Some of the most prominent murabitat are Khadija Khwies and Hanadi al-Halawani.

Aida al-Sidawi, a member of the murabitat at Al-Aqsa Mosque, told Al-Monitor that her life revolves around Al-Aqsa and the protection of the mosque through ribat activism. She performs the five daily prayers there and takes part in itikaf, spiritual retreat in Islam, held at the mosque during the month of Ramadan to prevent the settlers’ raids against the mosque.

It seems that the engagement of the new generation of Jerusalemite women in the political struggle against Israel and settlers’ attacks has been unconventional. They are using social media to communicate the suffering of Palestinians in East Jerusalem, a tool that has proven to be very successful, as several international celebrities have interacted with them.

Mariam Afifi, an activist from Jerusalem who became known for smiling at the camera as she was being arrested by Israeli Police, told Al-Monitor that she took part in the protests against the eviction plans in Sheikh Jarrah because — as an individual and a woman — she refuses to see the same displacements that happened in 1948 being repeated in Sheikh Jarrah.

She said that Palestinian youth have resorted to social media during the recent developments, because there was a media blackout on the displacement of citizens from Sheikh Jarrah back in 2009.

People are free to express their opinion on social media, which is not subject to politics, Afifi said, adding that it is a real media tool that helped Jerusalemites deliver their message to the world.

Defending the presence of Palestinian Arabs in the city of Jerusalem and their right that the Palestinian cause remains central for all of them is a common denominator in the three battles, she noted.