Each year, organizers of summer camps in the Gaza Strip compete to lure youngsters to their program of activities — and to their ideology. 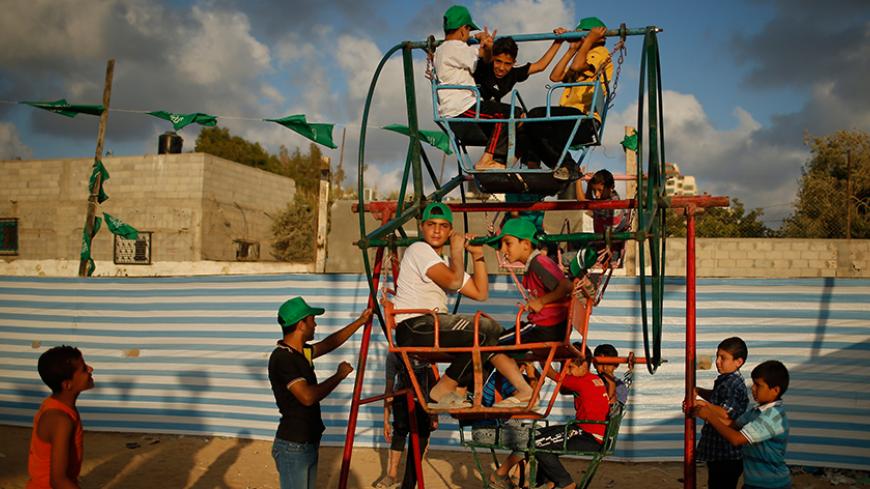 Palestinian boys play on a swing during a summer camp organized by the Hamas movement in Gaza City, June 16, 2013. - REUTERS/Mohammed Salem

GAZA CITY, Gaza Strip — Tens of thousands of children are signing up for the annual summer games in the Gaza Strip, sponsored by a variety of groups that sometimes have more in mind than entertainment.

Some parents are convinced that some camps are recruiting grounds for groups seeking to instill ideas in their children’s minds in the hope of attracting them to their ranks in the future. Some groups openly admit their agendas.

The United Nations Relief and Works Agency for Palestine Refugees in the Near East (UNRWA), Hamas and the Palestinian Islamic Jihad attract the largest number of Palestinian children in Gaza. Enrollment in summer activities has been underway since early May.

Just a little more than a month remains before the activities begin. Associations and organizations are engaging in a heated competition to lure elementary and secondary school-age children. Each group has its own objective for the activities, which last for weeks.

Youssef Moussa, manager of the UNRWA Summer Games Program, told Al-Monitor that the games will begin July 23. "More than 170,000 students from different age groups have registered" so far, he said. Registration will close a few weeks before the programs begin.

Moussa expects about 120,000 of those registered will actually participate. He noted that in addition to conventional activities such as soccer, gymnastics and cultural events, new activities are being introduced this year, such as a special entertainment program for each of the five provinces in the Gaza Strip.

UNRWA will host a program in Rafah in the southern Gaza Strip that will include cultural competitions and tutorials mainly in English. Another program will be dedicated to reviving Palestinian heritage, as participants will be wearing traditional costumes and dance the Palestinian Dabke. This event will be held in Khan Yunis. UNRWA will also provide activities and programs about democracy and accepting others in the Deir el-Balah province.

In Gaza City, activities will focus on the use and recycling of plastic and cardboard. The northern part of the Gaza Strip will feature programs focused on psychological support, since that area was the most devastated during the Israeli war on Gaza in 2014. There will also be conventional and traditional activities such as soccer, hurdling and long jumps.

Moussa estimates the activities will create 2,200 temporary job opportunities for educators and people to monitor activities. The aim of these events, he said, is to make up for the extra-curricular activities the students missed during the school year because of the lack of schools and the shortage of funds to build new ones. Time is also a factor, since school hours are divided into two shifts, morning and evening classes, which does not leave any space for extracurricular activities.

Dozens of places across Gaza have also been readied to host summer activities carried out by Hamas, Islamic Jihad and other movements. These facilities include 108 schools, nine centers for the disabled and three sports clubs.

Hamas activities, which this year will be called "Jerusalem Intifada," are designed to introduce the new generation to the Palestinian cause, said Mohammad al-Jamal, head of the media unit at Hamas' Popular Action Department.

Jamal told Al-Monitor, "We have opened the doors to registration for summer activities in mosques. We will launch them on July 10." He expects 50,000 to 80,000 participants from various age groups, as was the case in 2015. Hamas just started accepting registration a few days ago and so far has received about 5,000 to 7,000 applications, he added.

A variety of programs will include scouting activities, beach games, media and administrative courses, and some primary military training sessions. He noted that the activities last six hours a day, and the event will continue until Aug. 10.

Ahmed al-Mudallal, Islamic Jihad leader in charge of that movement's summer activities program, said their events are essential to reshape and educate the new generation about their moral, behavioral and revolutionary backgrounds so they can carry the torch of the Palestinian cause in the future. The movement also wants to provide fun recreational activities, such as swimming and soccer. Mudallal told Al-Monitor he expects at least 10,000 people to participate.

In a statement to Al-Monitor, Mahmoud Baroud, director general of Gaza's Ministry of Youth and Sports, said the ministry is no longer involved with any of the camps or their services. The ministry stopped holding summer activities several years ago given the lack of financial support.

The ministry used to allocate $200,000 every year to organize such activities, but the consensus government refused to transfer funds to the ministries in Gaza because of the split between Hamas and Fatah in 2007, Baroud said. However, he stressed the importance of such events for the young generation, regardless of the goals of their sponsors.

Parents seem divided about the events. Suhad Nassar, the mother of three children ages 8 to 14, told Al-Monitor she is willing to enroll her children in nonpartisan summer activities that could benefit them and she considers UNRWA's programs to be the safest environment for her children. She said she has been pressured by some Palestinian factions to enroll her children in their programs, but she declined to name the groups.

Mohammad Nofal, on the other hand, the father of a 10-year-old, told Al-Monitor that the Hamas summer camps are the best destination for his son. "I want my son to grow up knowing the reality of the Israeli occupation of our land. He needs to learn military combat to grow up and take part in liberating our land," Nofal said.