Hamas is keen to retain its influence in Palestinian society, and is using its annual summer camps to stay connected with Gaza youth. 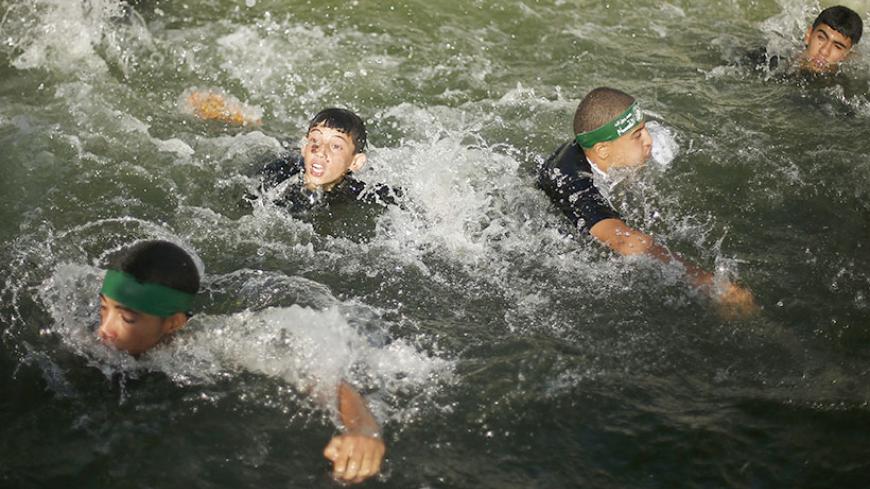 Young Palestinians swim in a pool as they take part in a military-style exercise at a summer camp organized by Hamas in Gaza City, June 12, 2014. - REUTERS/Suhaib Salem

GAZA CITY, Gaza Strip — In the streets surrounding the Saraya neighborhood in central Gaza City, boys are lined up in groups like military battalions, wearing paramilitary clothes and surrounded by supervisors in full uniform and carrying weapons, while loudspeakers chant fiery Hamas anthems calling for jihad.

A thousand students ranging in age from 12 to 17 gather in the afternoons for three hours, seven days a week, wearing fatigues, black shirts and green berets. They are trained in the basics of military action and security in the camps organized by the Hamas movement in the Gaza Strip during their summer vacation. Forty supervisors affiliated with the Izz ad-Din al-Qassam Brigades, the military wing of Hamas, divide the students into groups. Some groups are trained to carry and use arms and others to navigate obstacle courses, while another group is trained on debarkation techniques and safety.

Each year, Hamas holds summer camps for male and female students of various ages. Some of these camps are predominantly recreational and cultural, while others focus on the military drills, all part of a program to promote Hamas and its ideology. Hamza Ahmad, a summer camp official in the Saraya region, said military drills fall in line with Hamas’ conviction that the Palestinians are in a state of conflict with Israel, and they must know the basics of military action in addition to the security and cultural aspects of the program.

“There are ongoing incursions into the Gaza Strip from the Israeli occupation and all classes of the Palestinian people must learn the basics of dealing with firearms for self-defense,” Ahmad told Al-Monitor. “This young generation bears major responsibilities in the future and is supposed to be mentally and physically prepared for any military confrontation. The Zionist enemy took the land by force and it will only be taken back by force. This is what we teach these boys, who are the future generation, and who show a great desire to learn and train on weapons and military action techniques,” he added.

About 100,000 students from all over the Gaza Strip joined the “Pioneers of Liberation” summer camps organized this year by the Hamas movement. The camps are organized according to educational level, with primary, middle and secondary school stages. The students are registered in mosques scattered throughout the Gaza Strip. One group of participants expressed their enthusiasm to Al-Monitor for the diverse activities, especially military drills.

Saleh Jaafarawi, 17, said, “I was waiting for the camp’s events to start after I was registered through the mosque in my region of residence. I received some military training as part of the boys' program at school, but this camp has a special character and sense of detail, and offers more training.

“Gaza lives under circumstances that are different from the rest of the world. We are undergoing wars, blockades and invasions. That’s why people our age should be prepared for anything. I want to know how to use arms to be ready in case a Zionist aggression on Gaza occurs,” he said.

Mohammad Abdo, 13, did not hide his desire to join Hamas' armed wing when he becomes old enough. He said, “I want to learn everything about arms and martial arts so that I can be prepared to join al-Qassam Brigades and fight for Palestine when I grow up.”

The summer camps organized by the United Nations Relief and Works Agency for Palestine Refugees (UNRWA) were canceled this year due to lack of funding. Abu Hisna, a media consultant for UNRWA, told Al-Monitor, “UNRWA stopped organizing camps this year due to the financial crisis that it is undergoing and to the lack of funding for this purpose. It is hoping to resume these activities next year, in case there were enough funds from the granting bodies.”

Many Gaza parents with limited incomes due to the economic recession brought about by Israel’s siege had sent their children to the UNRWA camps in previous years, but many had to send their children this year to those organized by Hamas and the Islamic Jihad instead.

Alaa’ Abou Chanab, a government employee in Gaza who has not received his full salary for months, told Al-Monitor, “I was surprised that my 14-year-old son was trained on how to carry weapons during the summer camp organized by Hamas.

“I had to send my kid to the summer camp organized by Hamas after the UNRWA canceled the camp I used to send him to every year. I couldn’t forbid him from going because I cannot keep him home or send him to camps organized by private institutions. I haven’t received my salary for months. These children have the right to play during summer break,” Chanab said.

Since Hamas handed over control of the Gaza government over to the unity government, in compliance with the reconciliation agreement with Fatah, it is seeking to maintain its influence in Palestinian society and increase its popularity by ensuring interaction with all generations, especially the young.