Hamas is seeking to assuage fears among its members and supporters that they will suffer the same fate as the Muslim Brotherhood. 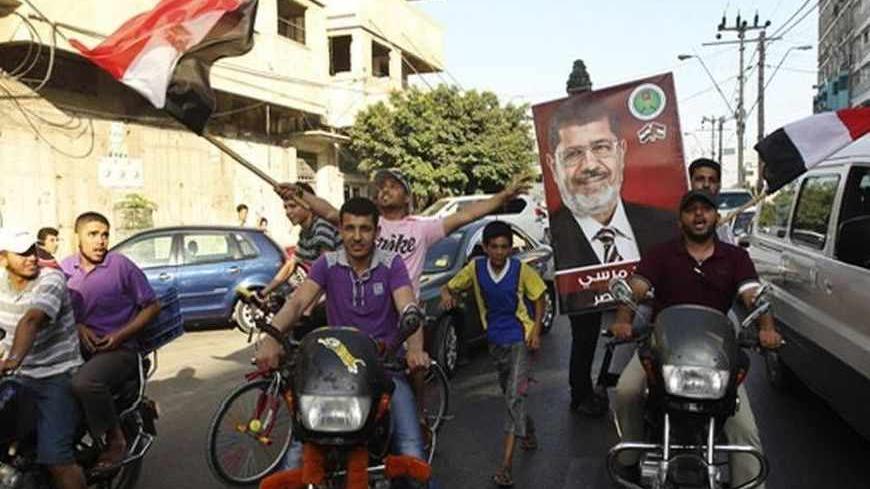 A political earthquake hit Hamas following the ouster of Egyptian President Mohammed Morsi. Frustration plagued both members and leaders of the Islamic movement in the Gaza Strip. They were hoping that the Islamic governance project would succeed with the rise of Islamists — the Muslim Brotherhood in particular — in Arab Spring countries, and the world’s new openness toward this project.

In statements regarding their crisis, Hamas leaders have tried to maintain calm. They also took a position of self-defense in light of efforts on the part of anti-Muslim Brotherhood Egyptian media outlets to incite hatred against Palestinians, especially those in the Gaza Strip. Yet, despite these efforts, tension and disappointment seemed clear in the ranks of the leaders in this coastal region. These leaders clearly support the actions of the Muslim Brotherhood in Egypt to oppose the military “coup” against Islamists.

A Hamas leader confirmed to Al-Monitor the emergence of signs of “disappointment” that the movement experienced, and is still experiencing, as a result of Morsi's sudden fall. The movement had raised its hopes high with Morsi’s arrival to power. After he opened prospects for greater empowerment of Hamas’ rule in the Gaza Strip, this enhanced the power of Islamists in Arab, Islamic and Western countries.

One leader, speaking on condition of anonymity, told Al-Monitor, “The movement, particularly at the level of its bases, is in the midst of a setback that has been unprecedented for decades. This came as a result of the closure of the main door in the face of the Hamas movement, which we thought would open other political doors for us and make the Islamic movement a major power in the Arab world.”

He revealed the concern felt by Hamas quarters following the outbreak of demonstrations in Egypt against Morsi. Consecutive meetings were held to discuss the consequences of the “crisis” and its political implications on the Gaza Strip, as well as ways to handle it and coordinate with the global movement of the Muslim Brotherhood to develop the appropriate scenarios that can help Hamas avoid these consequences with minimal losses.

The source explained that the movement's various institutions “are now following the global guidance office of the Muslim Brotherhood, after the leaders of the subsidiary offices in the countries where the group resides were disabled. This includes the Palestine office, which is part of the global office headed by Supreme Guide Mohammed Badie in Egypt.”

An informed source revealed to Al-Monitor on condition of anonymity, “Hamas and the Muslim Brotherhood started holding awareness sessions for their members in the Gaza Strip to reassure them about the ‘coup’ against the group in Egypt. They told them that the Islamists still enjoy major power in Egypt, and that the issue has not been settled yet. These sessions also aim at urging them not to be frustrated.”

Pictures of deposed Morsi have gone up on large billboards in some areas of the Gaza Strip. The billboards read: “The legitimate President Mohammed Morsi, so that our children know that their fathers were men … that they do not accept injustice and do not give in to corrupt views.”

The source said, “Hamas’ institutions are living in a state of fear, worried about the attempts of their political opponents to organize rallies against their rule in the Gaza Strip — similarly to what happened in Egypt. This has led Hamas to prohibit all kinds of rallies and sit-ins in the Gaza Strip — even if they are intended to oppose Israel's policies — so that they are not exploited by opposing elements.”

Despite the fact that Hamas refrained from commenting on the Egyptian events, the two satellite channels that are affiliated with the movement — Al-Aqsa TV, which broadcasts from Gaza City, and Al-Quds TV, which broadcasts from Beirut — turned into channels that defend the Muslim Brotherhood in Egypt. They broadcast live from Rabia al-Adawiya, where the deposed president's supporters are holding protests. This explains the dependence of the movement’s institutions in Gaza on the global movement of the Muslim Brotherhood.

The Hamas leader indicated that the movement “is worried about the political isolation that it may suffer in the event of the return of a regime that suppresses the Islamists in Egypt, and if its leaders were forbidden from going out smoothly through the Rafah crossing, traveling to Arab and Islamic countries and opening the doors of dialogue with European countries.”

“The loss of the Muslim Brotherhood in Egypt will inevitably affect the reality of the Islamists in all Arab and Islamic countries, and may affect the outcome of any upcoming elections. It will also affect the course of events in Syria and delay the fall of the regime of President Bashar al-Assad,” the source said.

The leader did not hide the fact that Hamas gave advice to the leaders of the Muslim Brotherhood during the period in which they governed Egypt, which lasted for one year. He criticized their failure to provide a successful model of governance, the overlapping powers between the presidency and the guidance office and their loss of allies among the Egyptian forces, including the Salafist Nour Party.

Islamist writer Momen Bsiso told Al-Monitor that Hamas received a major political blow with Morsi’s ouster, because both sides have the same ideological and political views. He said that the overthrow of the Muslim Brotherhood project in Egypt will lead to undermining the ruling project in the Gaza Strip.

“The Islamic movement in Gaza will face political difficulties during the next phase — be it at the domestic level or at the level of its relations with the Arab and Islamic region — and it will suffer greatly, because it will get its share of the project aimed at punishing the Muslim Brotherhood,” he added.

For the Muslim Brotherhood and its Palestinian branch Hamas to absorb the intensity of the political strike they received, they will have to deal with immense effects before they recover, and the process may take several years. Furthermore, their Palestinian political opponents — particularly Fatah — will exploit those effects that may lead Hamas into a long downward and unexpected spiral.