A group of masked men bombed a tourist resort in the Gaza Strip for holding a concert for both men and women, which raises questions on whether fundamentalists are once again gaining the upper hand in the coastal enclave. 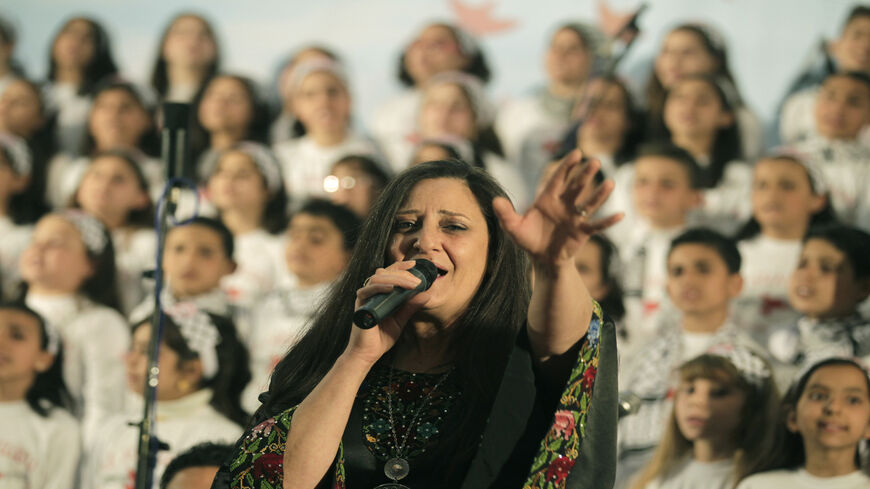 GAZA CITY, Gaza Strip — Five unknown individuals attacked Aug. 5 a tourist resort in the northern Gaza Strip with an explosive device, causing part of the wall surrounding the seaside tourist site to collapse. There were no casualties. The attackers wanted to prevent the holding of a mixed-gender concert.

The Bianco Resort, one of Gaza’s most luxurious tourist sites, opened its doors for visitors in July. It is a private investment project built on an area of 12 dunams (3 acres) and employs some 120 workers.

The resort has gained great popularity in the coastal enclave that has been under Hamas’ control since 2007. The tourist center offers its visitors a unique tourist experience in terms of relaxation, swimming and accommodation. It contains hotel suites and rooms, private chalets for families, a concert hall, swimming pools, restaurants and cafes.

A few hours before the bombing, a Salafist preacher named Issa Miqdad headed to the resort on the evening of Aug. 4, and asked the owner to cancel the gender-mixed concert, but the owner rejected the request.

On Aug. 5, Miqdad wrote on Facebook, “Today we went to the Bianco Resort in order to deny the evil before it happens, as this resort will hold a mixed singing party on the beach of Beit Lahiya [northern Gaza Strip]. We went to the place today and the owner refused our request and insisted on holding the party.”

In the same post, Miqdad called on the Hamas government in Gaza to stop the party, writing, “I call on all preachers and sheikhs and zealous people to denounce this evil through their [social media] pages and to mention the name of the resort and to warn against it because the center’s owner is spreading evil and we must fight it after he rejected our request."

Miqdad also described the concert as “organized corruption on the land of jihad,” and expressed hope that the party would be enough reason to close the resort.

Suhail al-Saqqa, the resort’s owner, told Al-Monitor that he had obtained a permit from the Hamas Ministry of Interior to hold the concert, and that after the attack, security forces affiliated with the ministry came to the scene to investigate, and arrested several suspects.

Saqqa said that the resort was the subject of an incitement campaign launched by fundamentalists on social media because of the concert.

Many restaurants and tourist sites in the Gaza Strip have recently held concerts for local male singers in a bid to stimulate domestic tourism and attract visitors. However, during one of the parties that was held in a Gaza restaurant on July 25, a woman was singing before a large audience of men — something that caused a major uproar in the coastal enclave.

Salah Abu Hasira, head of the Palestinian Committee for Restaurants, Hotels and Touristic Services in Gaza, told Al-Monitor, “The resort that was targeted is seen as a qualitative leap in domestic tourism, at a time when most residents are restricted from traveling or cannot afford doing so given the high poverty rate and unemployment among Palestinians.”

Abu Hasira described the attack on the Bianco Resort as “an immoral act and an alien to the Palestinian society traditions,” calling on security forces to bring the perpetrators to justice and provide adequate protection for tourist centers in the coastal enclave to prevent similar incidents in the future at the hands of extremists.

While Hamas did not issue any statement explaining its position on the incident, several Palestinian factions denounced the attack, saying that it brought back to mind the attacks carried out by those “espousing dark [extremist] ideologies.”

The factions stressed the need to confront and combat deviant ideas, adding that failure to hold perpetrators and those involved accountable will encourage others to carry out similar attacks.

Meanwhile, the Palestinian People’s Party warned against the spread of extremist ideology once again in the Gaza Strip.

In a statement issued Aug. 7, the Palestinian Center for Human Rights strongly condemned what it called the intimidation of citizens through the attack on the Bianco Resort in the northern Gaza Strip.

“The concerts that are being held in different parts of the Gaza Strip are licensed by the Interior Ministry,” the statement read.

Al Mezan Center for Human Rights, a nongovernmental organization, also denounced the attack on the resort and warned in an Aug. 7 statement against its repercussions on community peace and security, calling on concerned authorities, notably the Public Prosecution, to launch an investigation into the incident and to prosecute and bring the perpetrators to justice.

Several officials in the Interior Ministry refused to make any statement to Al-Monitor, claiming that the investigation has not been completed.

Hamas leader Yahya Moussa, however, told Al-Monitor, “Hamas and the security services in Gaza reject any attack on tourist sites in Gaza.”

He explained that the attack on the Bianco Resort is an individual act, and bears the hallmarks of an extremist ideology that is rejected by Hamas and the Palestinian community.

Moussa denied claims about the presence of extremist organizations in the Gaza Strip.

“These were a group of individuals and not an organization. They don’t have any external contacts and I believe that the Interior Ministry is doing its part to protect society from extremist ideologies and ideas,” he said.

Moussa stressed that his movement is not against holding concerts in Gaza, provided that it does not depart from the framework of Palestinian customs and traditions.

“Our society is conservative. Refusing the mixing of men and women does not stem from Hamas as much as it does from society itself,” he said.

The first clashes between Hamas and extremist groups in the Gaza Strip date back to Aug. 18, 2009, when Hamas killed the leader of the hard-line Jund Ansar Allah group, Sheikh Abdul Latif Moussa, in the city of Rafah in the southern Gaza Strip.

This was during the confrontations that led to the killing of 22 Palestinians in the aftermath of the announcement of the establishment of an Islamic emirate in Rafah, and the declaration of Hamas as a secular movement that must be fought against.

The attack on the Bianco Resort brought back the memories of a dark era in the Gaza Strip when operatives belonging to fundamentalist groups, such as the Islamic State, carried out a series of bombings in the besieged enclave targeting Hamas’ security forces, which had been cracking down on these groups.