Saudi clerics keep mum about concerts in the kingdom

The new open-minded tendencies of the Saudi Royal Court are causing controversy with the conservative religious establishment in the kingdom, especially concerning concerts. 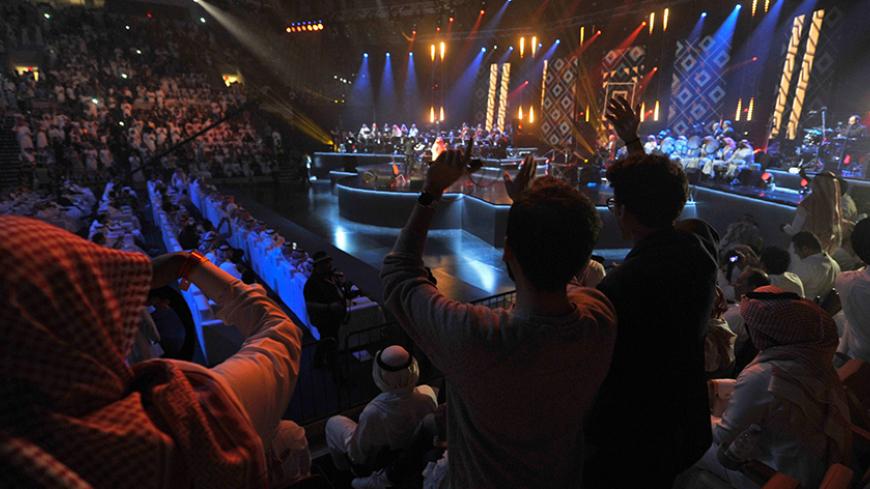 Under the auspices of Princess Adila, the daughter of the late King Abdullah bin Abdul-Aziz and head of the Saudi Heritage Preservation Society, the Saudi capital, Riyadh, witnessed a concert by the Saudi singer Waad on Feb. 14. The concert was a women-only event held in honor of the late singer Tarek Abdel Hakim, who died in 2012. Several Saudi princesses were in attendance.

The Waad concert came about following a Saudi Twitter campaign launched in early February with an Arabic hashtag that would translate into #We_Want_Mohammed_Abdo_in_Riyadh. On Jan. 30, Saudi singer Mohammed Abdo performed in Jeddah for 6,000 men. A decision by the General Authority for Entertainment — catering to Saudi Arabia's religious establishment, which opposes gender mixing — forbade women from attending.

Salem al-Hindi, the director of the Rotana Group — which organized the Jeddah concert — told Al-Arabiya on Jan. 30 that the company (which is owned by Saudi Prince Al-Waleed bin Talal) is working on organizing other concerts in Saudi Arabia that will be open to women, so long as Saudi authorities grant their approval.

Yet Saudi Arabia's grand mufti, Sheikh Abdul Aziz al-Sheikh, told Al-Majd TV on Jan. 13 that concerts and cinemas are harmful and cause immorality.

Two days following Sheikh’s objection, Ahmed al-Khatib, the head of the General Authority for Entertainment, visited Sheikh to assure him that Sharia controls, which call for women and men to be segregated during concerts, are being respected.

Most members of the Council of Senior Scholars and the Committee for the Promotion of Virtue and Prevention of Vice adhere to the Salafi approach, which forbids singing, especially when songs are accompanied by music and when musical events require men and women to intermingle. Yet these same religious figures, who are appointed by the Royal Court, have abstained from expressing their real stances so as to avoid raising the ire of the Royal Court. Such hard-line stances are viewed as contrary to the views of the new open-minded Royal Court. As part of the Saudi Vision 2030 economic plan, which is sponsored by Deputy Crown Prince Mohammed bin Salman, the General Authority for Entertainment has unveiled a 2017 "entertainment calendar" full of concerts and film screenings. And those who dare to publicly reject such events, such as council member Sheikh Abdullah al-Mutlaq, are keen to temper their views with nice and general statements.

When asked about concerts in an interview with Saudi Nida Al-Islam radio Jan. 13, Mutlaq indirectly and politely expressed his rejection of concerts. He asked Khatib to heed the words of Saudi's mufti, who opposes concerts, and hold a referendum to know the position of the people, because the people do not want such concerts imposed on them.

Mutlaq made no mention of the Royal Court, which ordered the establishment of the General Authority for Entertainment in May 2016, appointed its chairman and granted it power to organize concerts, even though it is known that the religious establishment forbids such concerts regardless of whether they are gender-segregated.

Although all cultural festivals and concerts held in Saudi Arabia need the approval of the provincial governor or representative, Salafists usually avoid directly and publicly criticizing the Saudi royal family. They choose to direct their anger and criticism toward the singers participating in the concert, such as Abdo, and the General Authority for Entertainment.

It should be noted that Prince Faisal bin Khalid, the emir of the Asir region in south Saudi Arabia, announced in 2009 that concerts would be completely called off during the annual tourism festivals that had been held in the city of Abha since 1998. He said that due to the emerging Salafi pressure, only cultural and folkloric activities would be held henceforth. The prince explained his decision to the media by saying he did not consider concerts important and that he had reservations about them. Conservatives warmly welcomed his decision.

The Saudi government has issued several decisions aimed at weakening the influence of hard-liners in religious institutions. In April 2016, the Council of Ministers issued and implemented a decision to strip the Committee for the Promotion of Virtue and Prevention of Vice of the power to prosecute, arrest or interrogate people.

Another example is the royal order issued in December to reform the Council of Senior Scholars and increase its 19 members to 21. Hard-line council members also are being gradually replaced with moderates who will support the new policies of the Royal Court in Riyadh, which is seeking to develop a more open-minded Saudi society, especially toward women and arts.

The Council of Senior Scholars has become more flexible, and is more likely to accede to the kingdom's new policies, despite the presence of traditional hard-liners such as Saleh al-Luhaidan, Saleh al-Fawzan and the grand mufti. These members, however, do not regularly talk about Saudi Arabia's rampant financial corruption and unemployment. They did not oppose the increased cost of gasoline and electricity or the government's decision to stop annual raises and bonuses to Saudi employees in September.

In a Jan. 5 interview with Foreign Affairs magazine, the deputy crown prince did not hide his concerns about the presence of extremist clerics who may disrupt economic reforms, in reference to Salafists objecting to gender-mixed concerts or film screenings.

The Saudi monarchy derives its legitimacy from Sharia, which promotes virtue and prevents vice, as stated in the constitution. This means that Riyadh is still in need of the religious establishment and its Salafi preachers to entrench its political legitimacy. And given that the Saudi monarchy rejects the idea of a parliamentary constitutional monarchy, it is compelled to contain the senior scholars and angry preachers to achieve its economic vision, either by marginalizing them or by offering them financial and functional bribes. In both cases, the government will lose control over the thousands of religiously motivated young people, who will either lose faith in clerics close to the government or sever communication with the isolated and despised scholars.