Is this the beginning of a revolution by Saudi women?

Saudi youths of both sexes are rebelling against their religious, social and political reality in light of contradictions between the religious and political speeches and deeds. 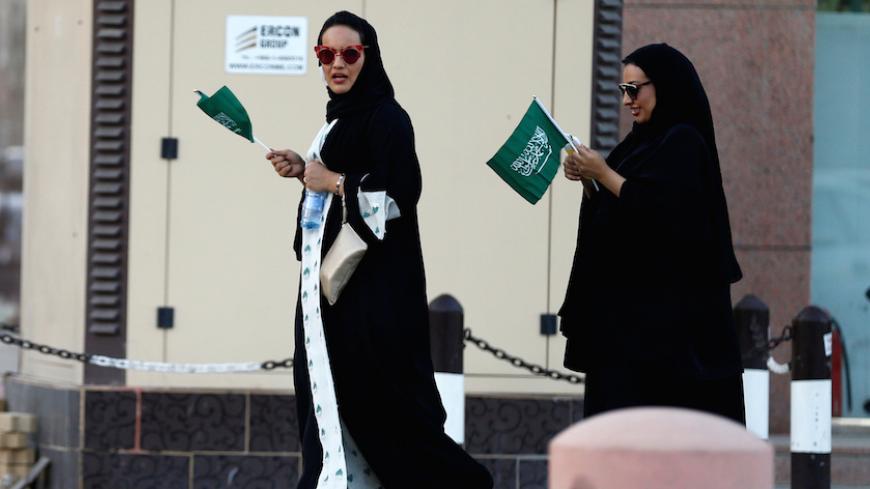 A police spokesman in Riyadh announced Dec. 12 the arrest of a young Saudi woman, Malak al-Shehri, for violating Saudi regulations by taking off her abaya — a loose-fitting full-length robe — in a public place, and openly revealing her relations with young men. The girl was held at the women's prison as a preliminary measure before being transferred to the public prosecution office and the Investigation Commission affiliated with the Ministry of Interior.

On Nov. 28, Shehri, 21, had posted on her Twitter account — which she deleted after being fiercely attacked by conservatives — that she would go out the next morning wearing a skirt with a “stylish jacket,” and start her day with breakfast at McDonald's and then coffee and cigarettes with a male friend.

The next day, Shehri headed to al-Tahliya Street in Riyadh, without wearing her abaya, and posted a photo of herself on Twitter.

This provoked the wrath of the Riyadh Committee for the Promotion of Virtue and the Prevention of Vice, which submitted a request to police to arrest Shehri on charges of public disobedience.

Manal Massoud al-Sharif, a Saudi writer and information security consultant, expressed solidarity with Shehri and posted on Dec. 13 her own photo without the abaya at Najma Beach resort, in Ras Tanura in eastern Saudi Arabia, a gated Saudi Aramco employee compound that is not subject to the country's conservative rules.

Sharif wrote on her Twitter account Dec. 16, “The [female] German defense minister visited Saudi Arabia and was not wearing the abaya. She was not arrested,” arguing that this shows double standards by Saudi religious institutions, including the Committee for the Promotion of Virtue and the Prevention of Vice in applying the Sharia provisions on citizens only, while exempting princesses, expatriates and foreign visitors.

Sharif’s tweet aimed at pointing out that Saudi Defense Minister and Deputy Crown Prince Mohammed bin Salman had hosted the German female minister on Dec. 8 and shook hands with her, although she refused to cover her hair and wear the abaya.

In a related context, the Saudi Ministry of Education also announced that it had opened an investigation after video footage went viral on social media. The video was shot by the father of a female student, showing his daughter coming out of her school in Sabiya province in southern Saudi Arabia on Dec. 7 without her abaya after the school's female principal, Mudhisha Hamlan, had confiscated the abayas of a number of students to punish them for wearing indecent, tight or colored abayas instead of the traditional black and loose-fitting robe.

State-sanctioned religious scholars in Saudi Arabia, most prominently among them Grand Mufti Sheikh Abdul Aziz ibn Abdullah al-Sheikh, are usually appointed by royal decree. They continue to insist on their traditional doctrinal views that women should be covered and should not mingle or shake hands with men.

Salih ibn Fawzan ibn Abdullah al-Fawzan, a member of the Council of Senior Scholars and the Permanent Committee for Islamic Research and Fatwas, insists that women should wear loose-fitting dress covering their entire bodies.

The Saudi monarchy, however, is often ignoring its religious establishment’s views and fatwas on women affairs. For instance, it has appointed women to positions that traditionally were limited to men. On Aug. 1, Princess Reema bint Bandar bin Sultan was named as the head of the women's section at the General Authority for Sports, and has appeared in the media, along with other Saudi women, without covering her face and hair on several occasions. Also, the Saudi Foreign Ministry announced in January 2015 a vacancy for the posts of diplomatic secretary and attache for women, which require the female official to travel and shake hands with foreign men.

The Wahhabi establishment has monitored the lives of Saudis to make sure that they are committed to the Salafi method since the first Saudi state was established in 1744. In addition, it has managed the affairs related to the education of women since 1960, under the supervision of Mohammed bin Ibrahim al-Sheikh, the grandson of Muhammad ibn Abd al-Wahhab, the grand mufti of Saudi Arabia at the time. It was only in 2002 that the education of boys and girls was integrated in a single ministry.

The Wahhabi establishment also opposed the appointment of women at the Shura Council. Sheikh Saleh al-Lahidan, a member of the Council of Senior Scholars denied on Sept. 30, 2011, that senior scholars were consulted by the monarchy or approved that women be present at the Shura Council. Yet, it now seems that this establishment has become more realistic and understanding of Riyadh’s new inclinations.

Oddly, the Wahhabi establishment has become more caring about women's rights and their participation in public life. This was evident in a Bloomberg interview with the Saudi deputy crown prince, who also is the chairman of the Council for Economic and Development Affairs, in April.

The deputy crown prince was reported as saying, “We believe women have rights in Islam that they have yet to obtain,” which reveals his determination to grant Saudi women all their rights.

Al-Monitor asked Haifa, a young Saudi woman sitting with her friend at a Starbucks coffee shop in Jeddah, in western Saudi Arabia, about the rights that Saudi women are seeking to obtain, and whether abandoning the hijab is part of their rights and freedom.

The young woman, a student at the College of Medicine, said on condition her last name not be used that a woman should be entitled to wear what she wants, as long as her outfit does not offend public morals.

Haifa added, “Women have the right to a stringent law that provides for a specific punishment against harassment. Mingling with men in public places and changing the shape and color of the hijab or abaya is no longer our primary cause. Saudi women now aspire to obtain the right to drive cars. We will keep fighting until our demands are met and until women can assume the post of a minister in the government. We also want to be able to choose who will represent us in an elected parliament. Our cause is not limited to black abayas imposed by the appointed Shura Council.”

Most Saudi officials in political and religious authorities declare their support for women's rights, whether those provided for by Islam or by man-made laws. All of them declare their support for women's participation in public life, but the difference in the interpretation of the concept of rights between the political and religious spheres makes the Saudi women’s mission to get their rights more difficult, which may be pushing some women to take bold steps that could embarrass the authorities in Riyadh.