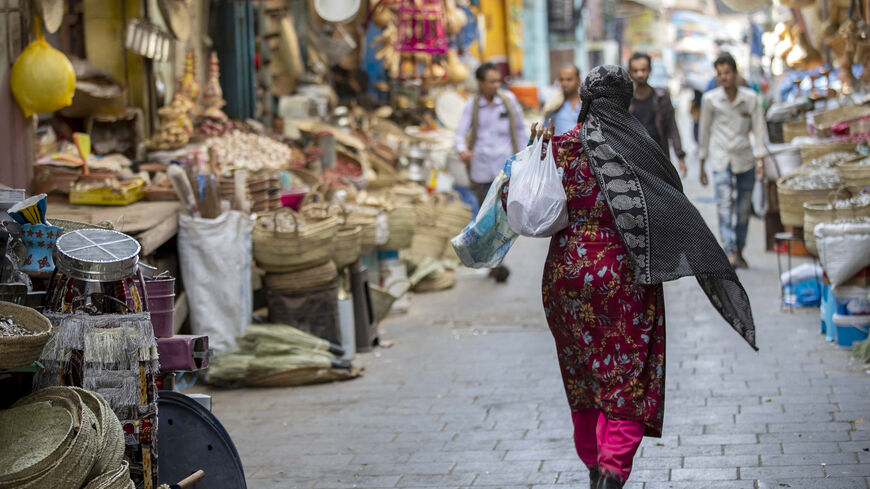 A Yemeni woman shops at a market in Yemen's third city of Taiz, on Dec. 15, 2022. Yemeni society, although deeply conservative, has traditionally allowed space for individual freedoms. But this is changing under the Houthi movement, which was founded with the aim of pushing for a theocracy.  - AHMAD AL-BASHA/AFP via Getty Images

What happened: Yemenis have been posting on the social media site using the Arabic-language “Yemeni identity” hashtag. The posts consist of pictures of Yemeni women in colorful traditional clothing and are in response to the strict dress code imposed on parts of Yemen controlled by the Iran-backed Houthi rebels.

The Iran-backed Houthis took power in 2014 and have recently tightened dress code rules for women in Yemen, Al-Araby and Arab News reported.

Yemeni women took to social to break the Houthis ban on them dressing in colourful clothing.
More & more people are resisting the Houthis draconian measures despite the police-state that they run.#Yemen pic.twitter.com/bcEpkJ5uNF

Women in Houthi areas must wear a long, black, loose-fitting “abaya” that covers them from head to toe.

Few users addressed the restriction of the colored abaya directly. Twitter user @tasabihalh0rimy wrote on Saturday, “This is our identity. Black is a lonely color.”

Some of the photos also showed Yemeni men in traditional and colorful clothing alongside women.

#Yemen social media flooded with images of Yemenis in their traditional clothing under hashtag #الهوية_اليمنية
"#Yemeni_Identity" as a rejection of Houthis attempts to replace it with their religious identity "#الهوية_الايمانيه". pic.twitter.com/5yrQ2CDqYW

Why it matters: The dress code is strictly enforced in Houthi parts of Yemen. In 2021, Yemeni model Intisar al-Hammad was imprisoned by Houthi authorities for “indecency.” She had also worn colorful clothing in pictures.

Know more: The hijab is not compulsory in parts of Yemen controlled by the rival Saudi-backed government, though most women wear one for a variety of societal and religious reasons.

Yemen’s neighbor Saudi Arabia required women to wear a black abaya for decades, but the kingdom removed the law in 2018.

The ongoing protests in Iran began when a Kurdish woman was allegedly beaten to death by religious police in relation to how she wore her head covering. Iranian authorities have been punishing women over the hijab more harshly recently, Al-Monitor’s correspondent in Tehran reported last week.

Iran’s dress code for women is less strict than the one in Houthi territory.