Who will be Egypt's next 'Hijab Queen'?

Young Egyptian designer Aya Mahmoud wants to hold the hijab to a higher standard, while highlighting the value of conservative fashion among Egypt's young women. 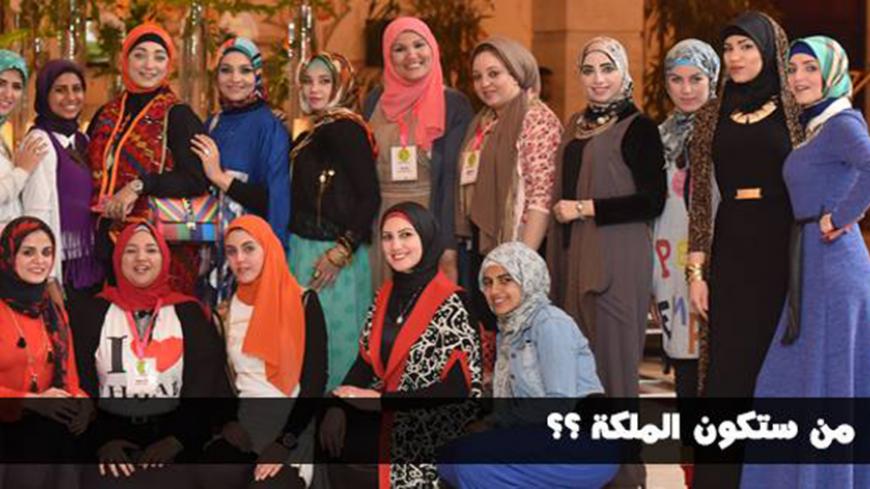 Contestants of the “Hijab Queen” beauty pageant pose for a group photo, March 22, 2016. The text on the image reads "Who will be the Queen?" - Facebook.com/egypt.hijabqueen

Aya Mahmoud, a dress designer whose designs cater to veiled women, is being rebuffed by religious and secular critics alike for staging her second annual beauty pageant, which culminates April 9 with the crowning of “Hijab Queen” in the Cairo suburb 6th of October City.

Yet the event has a growing fan base: Last year, only 200 women sought the title; this year, 2,500 women applied through the pageant’s Facebook page.

The call for candidates a few months ago was met with scorn from Salafist clerics, who view the pageant as a shameless display of the female form, as well as from secular citizens who decried the need to cover women’s “crowning beauty” — their hair.

Mahmoud says the pageant draws attention to the beauty of loose-fitting clothes and long veils that cover the neck and hair, which are worn by many Egyptian women. Speaking to Al-Monitor, she said the pageant emphasizes that it is possible for women to be stylish and beautiful while wearing the veil. The event aims to help spread the veil’s use throughout Egyptian society, she said.

She noted that the event portrays Islam in an appealing way, while challenging calls to discard the veil and depictions of veiled girls and women as unattractive or lacking fashion sense.

Egyptian journalist Sherif el-Shubashi last year called on women to discard their veils. He said Egyptian women had been threatened, coerced and psychologically pressured to wear the veil in a grand publicity campaign unleashed by political Islamist factions in their quest to form a new caliphate.

Shubashi was hardly the first to make such a call. Years before him Gaber Asfour, a literary critic known for being part of the "old guard" of intellectuals under Hosni Mubarak and who later went on to serve as culture minister, had publicly advocated the idea on several occasions, which was fiercely attacked in parliament and by Islamists. Also, Nawal El Saadawi, an 83-year-old female writer, physician and activist, has long been considered one of the staunchest opponents of women covering their heads or wearing the hijab.

Still, Mahmoud pointed out the growing popularity of the pageant concept. In fact, a separate but similar pageant was held in January in Sharm el-Sheikh.

Mahmoud told Al-Monitor the judges for her pageant spent two months selecting 10 finalists, traveling to far-flung governorates to choose one or two contestants from each.

Despite the “Miss” title, “applicants included married women, some of whom have reached the final round,” she said. “All were required to hold a university degree.”

They also must be 25-35 years old, at least 160 cm (5 feet 1/4 inches) tall and weigh less than 80 kilograms (176 pounds). They must be committed to wearing loose-fitting clothes and a veil that completely covers the neck and hair.

Mahmoud told Al-Monitor that many of the applicants held master’s degrees, and many were physicians, businesswomen and successful entrepreneurs. Contestants had to pass tests related to general culture, technology, religious and political affairs, speech, manners, and self-confidence. She added that the winner will be crowned ambassador of the hijab community, necessitating that she have an acceptable level of cultural awareness, a strong personality and the ability to speak well in public.

In applying, many women wore clothes that resembled the veil but did not conform to the strict interpretation of what a veil is supposed to be, Mahmoud said. Moreover, many applicants wore tight-fitting clothes that accentuated their female form, which violates the purpose of the veil, according to Mahmoud. She added that the judges helped those women change their dress styles to conform to traditional veiled values and introduced them to the style of loose-fitting clothes that hide the female form.

Samia Khodr, a sociology professor at Ain Shams University, told Al-Monitor that Egyptian society currently suffers from a "general state of unsightliness," as she characterized it. Many women, veiled or not, go out in public wearing clothes that are not color coordinated or are unflattering to their body types.

Khodr said any call to teach young women the art of dressing, particularly those who wear the veil, might lead to positive results — especially among a Facebook audience, as many girls learn mannerisms from social media.