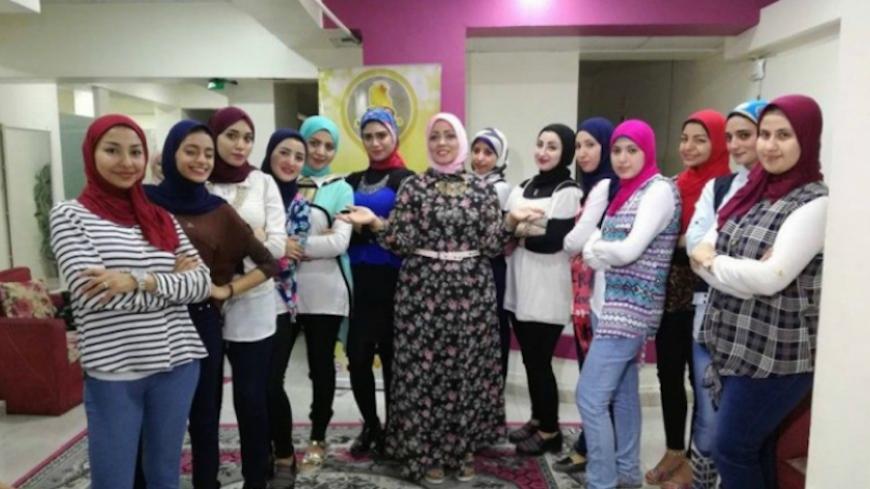 Fatma Bakr (center), organizer of the Miss Upper Egypt beauty pageant, is seen in a group photo with some of the would-be participants in the canceled competition. - FACEBOOK/Miss Upper Egypt

What would have been Upper Egypt’s first beauty pageant stirred a hornet's nest of controversy this month, outraging local conservatives who said it would spread debauchery and was unsuited to the region’s traditions.

The pageant was scheduled for Oct. 10 in Assiut governorate, where a large gathering of celebrities, fashion designers, beauticians and public figures were expected. Yet the event was canceled that day when hotel officials said organizers hadn’t received proper security clearance — meaning police would not be present in the event of demonstrations.

Given that the organizer received a death threat and warnings that her workplace and the hotel would be set on fire, security was a serious concern. She and the judges were also assailed and threatened on social media.

Assiut governorate, 320 kilometers (200 miles) south of Cairo, is known for its fundamentalist ideas about religion and gender. Women there are often viewed as religious conservatives who all wear black cloaks and veils (hijab) and are less educated than women in Cairo and coastal cities.

The “Miss Upper Egypt” pageant had been harshly criticized over the past month for defying social traditions there.

But the brains behind the beauty pageant, organizer Fatma Bakr, had hoped it would help people discard stereotypes about women in that region.

Bakr said she was seeking to encourage Upper Egyptian women and girls to show their inner beauty, intelligence, social initiatives and aspirations, just like their peers in other parts of the country. "I want to let society know more about those women and girls. I also want to help them speak up about themselves and their goals," she told Al-Monitor.

Ten Upper Egyptian women, all wearing headscarves, were meant to take part in the pageant. The winner was to receive prizes and be financially backed if she had her own social initiative or be entrusted with playing a role in a social initiative carried out by a charity or nongovernmental organization.

To qualify for the pageant, women had to be 18-38 years old, preferably with higher education degrees and their own social initiatives. Their physical beauty is not as important as their ambitions, culture, good spirit and attractive personality, said Bakr, a beautician.

The jury would have included public figures, professors, etiquette specialists, beauticians and fashion designers. One of the judges, a pharmacy professor at Assiut University, withdrew from the jury, pressured by criticism. However, she said her withdrawal does not mean she rejects the idea.

"Those who criticize us say this pageant is against traditions. They claim it also spreads debauchery and immorality,” Aya Mahmoud, a fashion designer and one of the judges, told Al-Monitor.

Mahmoud added that despite such harsh criticism from locals, there has been an increasing interest from girls and women to participate.

The 10 finalists were narrowed down from a field of about 250 contestants, organizers said. All of the finalists had their families’ support, they added.

Participant Nariman Osama said she got involved because she was seeking support for her social project to help Egypt’s thousands of street children. Osama, a 26-year-old lawyer, wants to help transform their notorious behavior through art.

“I have an idea that needs a sponsor and I participated in the competition for that reason. I thought that one of the competition’s sponsors could help me with my project,” she told Al-Monitor.

Osama, herself a parent, faced opposition from her mother and sister, but her husband supported her and she was determined to take part in the competition. “It is a dream, and I have to make it happen,” she said.

The controversy has also spread to parliamentarians, who differ over whether it is appropriate for Upper Egyptian women to take part in beauty pageants.

Parliamentarian Elizabeth Shaker, who hails from Assiut governorate, said the pageant does not suit the Upper Egyptian community and creates sensitivity as it partly depends on displaying beauty, which is totally rejected in Upper Egypt.

Shaker added that Upper Egyptian women are beautiful because of their morals and their adherence to traditions and good behavior. "It would have been much better to carry out awareness campaigns in Upper Egypt about other issues than holding this beauty pageant," she said.

However, Amna Noseir, another parliament member from Assiut governorate, said it is a legitimate right for women in Upper Egypt to take part in the pageant. “They have the right to be like their peers in other parts of the country,” Noseir, a professor of Islamic philosophy and doctrine at Al-Azhar University, told Al-Monitor.

Upper Egypt is the most traditional region of the country. In recent years, it has been associated with clashes between Muslims and Christians.

Bakr said one of her aims in organizing the pageant was to stop Upper Egypt from being associated with such violence and centuries-old traditions.

"I wanted to change this. I wanted this marvelous part of the country to be associated instead with beauty," Bakr said.