To veil or not to veil: Iraqi women face scrutiny over their choices

Iraq's religious parties are increasingly forcing women to wear the veil through intimidation and repressive policies, to the frustration of secular progressives. 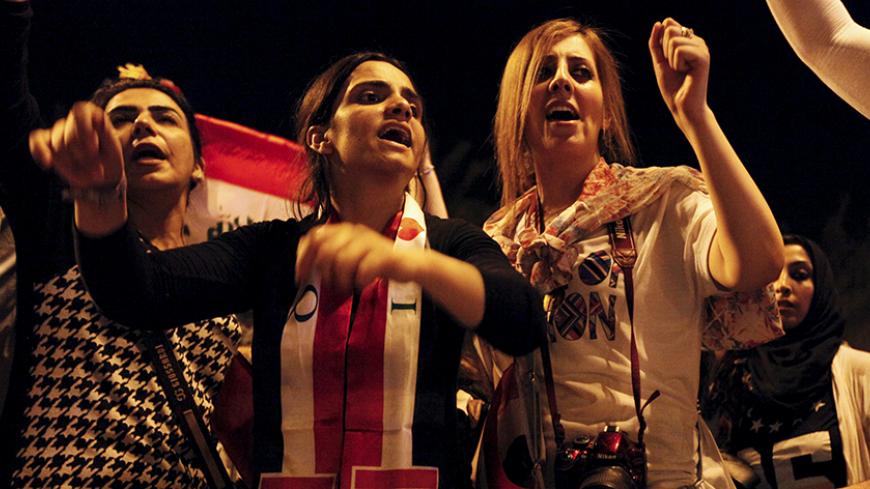 BAGHDAD — The Najaf Nationality Directorate, south of Baghdad, refused to grant a travel permit to civil activist and Iraqi citizen Intisar Alyawi al-Mayali July 5 because she appeared unveiled in the photo attached to her passport. This incident sparked outrage and highlighted once again the conflict between secularists and the conservative current typified by Islamist groups.

Civil activist Intisar Yassin commented on the incident to Al-Monitor, “Not granting an unveiled woman a passport is a violation of human rights by a staff member who ignores the law and constitution when processing the citizens’ files.”

One of the main conflicts between secularists and Islamists revolves around the civil and intellectual identity of Iraqi women. There is an enormous contrast in stances on women’s rights in Iraq. Although secularists point out that the Iraqi Constitution guarantees the civil rights of all citizens, Islamists have no trouble finding religious, social and moral pretexts to justify their viewpoint and actions. This conflict clearly reveals the political balance of power tipping to the Islamists’ side.

Secularists made up a large group of the civilians who protested Aug. 7 all over Iraq​, calling for reform.

Sadr al-Din al-Qabbanji, the Friday prayer imam of Najaf, accused the protesters of waging “a campaign to return to secular rule in Iraq and a quest to topple political Islam.”

The skirmishes between Islamists and secularists did not arise overnight. They have a long history and have become a part of daily life in Iraq, where unveiled women are not rare. They are harassed and pressured to wear the veil that is part of traditional Islamic dress.

In 2012, banners forbidding unveiled women from entering the “holy” town were raised in the streets of Baghdad neighborhood Kadhimiya.

On Feb. 9, 2013, Iraqis organized a beauty festival that brought together specialists in the fields of makeup, hairdressing and fashion. These professionals showcased their talent on a small number of female participants, while many spectators came to observe the event. One of the festival’s organizers, Nadia Hamza Fouad, told Agence France-Presse, “This activity [was] the first of its kind after the 2003 incidents. It is the first step to success.”

In Islam, “tabarruj” refers to a woman displaying her beauty outside of the home. On Sept. 17, 2014, the Ministry of Education forbade girls from committing tabarruj and imposed a conservative dress code on them that called for loose-fitting clothing.

The editor of the family and society page of Al-Sabah newspaper, Qasim Mozan, told Al-Monitor that refusing an unveiled woman a travel permit is a regressive move and a violation of their legal rights.

Meanwhile, Shaymaa al-Fatlawi, a member of the education committee of the Dhi Qar Provincial Council, called on the Minister of Education Mohammed Iqbal April 9 to “forbid tabarruj for schoolgirls since it contradicts the divine teachings, traditions and norms that children in Iraqi society have been brought up on.”

Iqbal responded to this proposal on April 11 by banning girls in Iraqi schools from wearing “indecent” clothes and other forms of tabarruj.

On Jan. 19, 2014, Grand Ayatollah Ali al-Sistani replied to an inquiry made by an Iraqi university student, seeking his opinion on the phenomenon of tabarruj in colleges and institutes. In a response published in various media outlets, Sistani said, “A woman’s spirit is not reflected in her tabarruj and ornaments, rather in her chastity and conservative appearance before other people.”

This statement by Iraq’s highest Shiite religious authority is widely considered an order that cannot be misinterpreted or contested. It is in line with the strict orders of the different religious authorities, such as Muhammad al-Sadr, who have all stated the necessity of wearing the veil. As a result, more women have agreed to wear the veil and niqab, a clear indication that religion and conservative thought are spreading in Iraqi cities for both Shiites and Sunnis.

In this conservative environment, “It has become commonplace to advise unveiled women to wear the veil,” said Najaf teacher Suha al-Tarihi, who chooses not to. “If they do not comply, sometimes this advice then becomes coercion to wear the veil. Some teachers in Najaf have been forced by the school administrations to wear the veil,” she told Al-Monitor.

Journalist Estabraq Ali agreed, telling Al-Monitor, “Some people exploit the country’s democratic system. They think they can interfere in the privacy of individuals and pressure them to adopt different points of view.”

Student Nada Jawad from Babil told Al-Monitor, “Most female students in Babil University are veiled, and the conservative environment does not allow them to remove their veil. The situation was different in the late 1940s, when Iraq organized the first beauty pageant in Baghdad,” Jawad said.

While journalist and poet Nital Meshkoor, who identifies as a secularist, believes “Iraqi women have been deprived of their rights,” Haifa al-Mousawi, a veiled woman who spoke to Al-Monitor, said, “The happy Muslim woman is the veiled one who abides by the teachings of Islam. This image should be generalized in society to become a role model for other women.”

Whether opting for the veil or not, women are entitled to make their own decisions. But when social or religious forces meddle in women’s choices, this represents a huge problem.