Will Karbala be added to list of World Heritage sites? 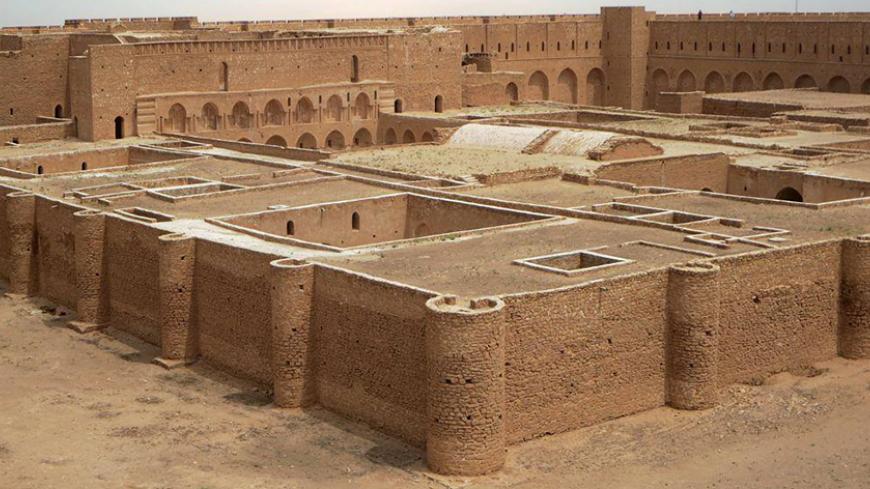 A view of the the Fortress of al-Ukhaidir, which was constructed in 778, Karbala, Iraq. Posted May 13, 2016. - Facebook/David Stanley Nanaimo

BAGHDAD — The Karbala Provincial Council announced March 3 the formation of a committee to follow up on the issue of adding the city — which is home to about 300 archaeological sites — to the UNESCO list of World Heritage sites. The Fortress of al-Ukhaidir (built in 778) was included on the UNESCO agenda during a July 2016 meeting. The site, however, did not meet all the conditions and was not considered for the list.

The council also hopes to include Caesar's Church, which is located 70 kilometers (43 miles) from Karbala, to the list of World Heritage sites since it is the oldest eastern church in history. It was built in the fifth century, more than 120 years before the emergence of Islam. Today, the church is considered of exceptional importance as it represents a Christian landmark, and promotes shared living and cultural coexistence in an Islamic milieu.

The council also seeks to add to the list al-Tar Caves, located 45 kilometers (27 miles) southwest of Karbala. These rocky formations date back to 1300 B.C. and are believed to have served as a passage for people who used to roam the Iraqi desert heading toward neighboring countries.

Khan al-Utaishi is also nominated for the list of World Heritage sites. It is one of the many archaeological khans, such as Khan al-Nakheel and Khan al-Rabeh. It was established during the Ottoman rule in Iraq (1532-1918) and served as a rest house for travelers from Baghdad and Karbala all the way to Najaf, 160 kilometers (99 miles) south of Baghdad.

Hussein Jawad, the head of the tourist department in Karbala’s council, told Al-Monitor, “This interest in seeking to add Karbala’s archaeological sites to the World Heritage [list] is a legitimate right, given the great historical importance of Karbala, before and after Islam. Karbala became a holy city for Muslims since the death of the Shiite Imam and the son of the prophet’s daughter in 680 [Hussein bin Ali], whose grave lies in this city today and is visited by thousands of Muslim pilgrims every year.”

He added, “By joining the World Heritage list, we seek to introduce the world to the city’s history. Also, this would protect the city’s cultural heritage, lead to financial and technical support, and encourage international exploration groups to visit the area and reveal its historical secrets.”

He also noted that “a national strategy is being developed for the maintenance of these monuments, so that they can meet UNESCO’s [World Heritage] list requirements. This will be done with the help of international experts, who will make field visits to examine the monuments in the upcoming period.”

He said, “We also hope that Karbala’s relics and monuments would later constitute an important source of income for the city, after the launch of the archaeological tourism sector as well as the religious tourism, which is known in the city."

However, the aspirations to add Karbala’s archaeological monuments to the list of World Heritage sites remain far-fetched given the poor conditions and dilapidation of these relics because of weather, illegal excavations and major neglect.

The scientific, cultural and services landmarks have always been subjected to demolition and neglect. Hussein Yasiri, the head of the Karbala Department of Antiquities, in a press statement, confirmed this in October 2016, saying, “Most of the archaeological sites in the city are wearing off.”

As a result of such negligence, some of the walls of Khan al-Utaishi crumbled on Aug. 16, 2016, while the rest is threatening to collapse.

Governmental and official parties also carry out transgressions on the city’s archaeological sites. In fact, the Karbala Department of Antiquities accused security forces in December 2016 of ongoing infringements on the Fortress of al-Ukhaidir archaeological site by establishing a military camp on the premises.

In addition to neglect, there is a lack of awareness of the importance of heritage and there have been many attempts to steal artifacts, as was the case on Jan. 22 when smugglers tried to steal several relics, namely a Jewish manuscript.

According to Sandas al-Tarihi, a member of the Karbala provincial council who spoke to Al-Monitor, this neglect and lack of maintenance is the result of “the security chaos in Iraq after the fall of Saddam Hussein’s regime in 2003, compounding now the war on the Islamic State combined with the financial crisis, which caused a shortage in the funds necessary for archaeological protection and maintenance.”

She said, “The follow-up committee set up by the council will work on securing the financial and human resources and to collaborate with foreign experts in the field of exploration and archaeological maintenance as per UNESCO specifications, so as to ensure the inscription of the city on the World Heritage list."

Tarihi noted, “The first step on the road of the archaeological sites’ maintenance has begun with the encouragement and promotion of the cultural, artistic and tourist activities and events in those locations.”

The Imam Hussein Center revealed Feb. 26 a project for the maintenance and restoration of historic manuscripts, as well as training for specialized staff in coordination with the General Authority for Antiquities and Heritage of Iraq.

In the context of promoting archaeological tourism, the Archaeology Department at the University of Babylon organized a field visit for its students to the Fortress of al-Ukhaidir on Feb. 26.

In 2009, the Tourism Directorate in Karbala decided to revive the Ukhaidir Cultural Festival, which used to be held under Saddam’s regime and attracted tourists, writers and poets from all over the world.

Iraq was successful in including its endangered marshes to the list of World Heritage sites on July 17, 2016, which seems to be an incentive today to work for the addition of other cities such as Najaf, near Karbala, and the archaeological city of Babylon.