The historical Fortress of Al-Ukhaidir is collapsing because of natural causes and the Iraqi state’s neglect. 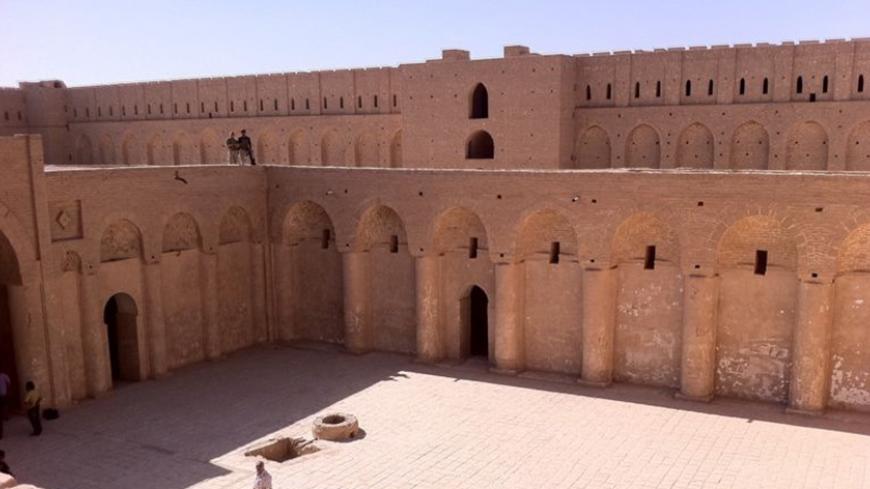 The Abbasid palace of Ukhaider is seen near Karbala, Iraq, Nov. 27, 2011. - Wikimedia Commons

KARBALA, Iraq — The once-mighty Fortress of Al-Ukhaidir is wasting away in the desert of Karbala. This great palace, which Abbasid Prince Isa ibn Musa built for his retirement from politics, is crumbling from lack of maintenance. Its internal and external structures collapsed as the strong wind in the desert washed away its extremities, and its foundations have weakened because salinity has found its way into the walls.

The fortress, also known as the Abbasid palace of Ukhaidir, was built around 778 about 105 kilometers (65 miles) southwest of Baghdad. The palace towers almost 70 feet high and is more than 550 feet wide. The name Ukhaidir — derived from akhdar, the Arabic word for green — contradicts its surroundings, where only the sun and dull-yellow stretches of sand exist.

During Al-Monitor’s visit to the site, Ahmed Kadhim, a teacher from Babil who accompanied his students on an excursion to the site, said, “The students are being taught about ancient monuments and the importance of conserving and maintaining them. Yet they were shocked that what they have learned is incorrect. It is falling apart in front of their eyes, while the relevant parties have not interfered to prevent the loss of the most important monument in central and southern Iraq.”

Meanwhile, Iraq is asking to have the site included on the UNESCO World Heritage List.

“It was a great fortress, about which [Italian traveler and author] Pietro Della Valle wrote while he was on his way to the Levant in 1625," Kadhim said. "Yet the destruction requires us now to be careful when walking around. The monument consists of a vast area, with many corridors and overlapping rooms, and dilapidated ground reservoirs. It is a dangerous place, in the absence of [warning] signs.”

Mohyee Massoudi, an archaeologist and historian, told Al-Monitor, “The situation is unstable [in Iraq]. The security, economic and political problems have grown as top priorities, which have placed the maintenance and conservation of monuments in the low priority queue for the government, and even the people.”

Al-Monitor met with Saeed al-Juburi, a Bedouin who grew up near this historic edifice, where his tribe had settled 20 kilometers (12 miles) away from it. He was resting in the shade with his three camels after a long search for water and pasture in the desert. He said, “In the past years, this place was a haven for thieves and outlaws. It is a vast site where it is easy to hide in its dark rooms and corridors without being caught.”

Bandits would sometimes take refuge there, and armed groups turned it into a weapons warehouse, particularly before the state took notice of the palace’s historic importance and before researchers and archaeologists started visiting in 1625 with Della Valle. Bandits also used the palace during the unstable post-2003 period, when US forces invaded Iraq.

Saad Hassan, an archaeological researcher from Babil, told Al-Monitor about his participation in the largest rehabilitation project of the site in 1975. He said, “The collapsed rock masses were removed and the construction, along with some of the palace corners, were renovated. Yet the project failed to prevent the walls from falling down.”

Hassan added, “The Iraqi government funded the project, in which Iraqi workers and experts took part. The works continued for six months, during which the walls were restored and foundations were repaired.”

But he believes that “when maintenance and restoration works are discontinuous, such projects are futile.”

Hassan said that he accompanied a group of US soldiers in Iraq on a tour in 2005. “They were amazed by the greatness of the edifice that is still standing. One of them said that had this edifice been in the United States, it would have turned into a tourist attraction generating a lot of money to the national budget,” he said, adding that these soldiers were curious to see the greatness of Iraq’s archaeological sites.

He added, "Dozens of historical sites in the province of Karbala alone have not been included in the exploration conducted by the General Authority for Antiquities and Heritage. This is in the absence of sufficient security measures to prevent the site from being looted. In the 1970s and 1980s, there were projects to turn the Fortress of Al-Ukhaidir into a tourist attraction. Social and art activities were held there, most importantly, a festival held in 1972 by the Academy of Fine Arts in Baghdad.”

Festivals were funded by the Culture Ministry under the former regime (1969-2003). But most of the arts and cultural festivals were halted with the Iraq-Iran War (1980-1988) and no similar festivals have been organized there since 2003.

Hassan believes that “the extreme temperatures in the middle of the desert, the lack of maintenance, humidity and groundwater have caused some of the palace walls to collapse.”

“Neglect,” said Mona Ghorabi, a member of the Iraqi parliamentary committee on tourism and antiquities, commenting on the cause of poor conditions of archaeological sites. “These sites have been subjected not only to the Islamic State's destruction, but also to the [political] authorities’ constant neglect, even under the former regime,” she told Al-Monitor.

The neglect has become so obvious that it no longer can be ignored. Jasem Hameed al-Maliki, head of the parliamentary committee of tourism and antiquities in the Karbala Provincial Council, said a year ago that 1.5 billion dinars ($1.3 million) was earmarked to renovate the palace and the surrounding area. Karbala member of parliament Ibtisam al-Hillali told Al-Monitor, “The federal government seeks to rehabilitate the site after a long period of neglect and sums of money were allocated to develop the site.”

However, no rehabilitation project has been carried out so far. The site's fate apparently must rest with citizens who are willing to take action. Natural factors, which caused much of the deterioration, are difficult to control, but volunteers can organize campaigns and raise funds to fix what can still be repaired. Cultural and art festivals also could generate funds for the huge, historic structure.

Al-Monitor took the risk and continued its tour inside the palace, in a maze of rooms, corridors, dark hallways, stairs, wells, caves and many collapsing roofs. The absence of a tour guide is felt in this stand-alone, strange and secluded site. In contrast to its confusing internal details, the palace appears solid from the outside. Despite the erosion of many external pillars and internal supports, it stands like a miracle in the desolate desert.