Iran has expressed interest in helping repair the Taq Kasra, the remains of a pre-Islamic Persian palace in Iraq with a historically significant archway. 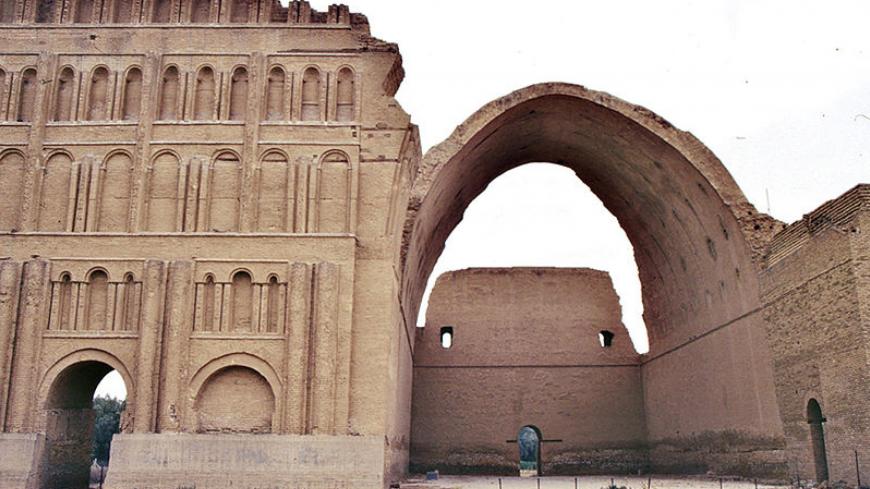 The Taq Kasra arch in al-Madaein is seen on March 31, 2016. The arch since has since suffered damage on at least two occasions. - Karl Oppolzer/Wikipedia https://commons.wikimedia.org/wiki/File:Ctesiphon_01.jpg

Part of a famed arch that was part of an ancient Persian palace in Iraq collapsed around the beginning of the year, and Iran has expressed its readiness to help rebuild it.

Iran’s minister of cultural heritage, Ali Asghar Mounesan, said Iranian archaeologists are ready to help rebuild the ancient Taq Kasra arch following the collapse of a section of it. He said, “The problems Iraq has been going through are impeding the protection of artifacts and historical monuments.” He added, “We are looking forward to paving the way for Iran to help restore Taq Kasra and save this historic building from collapse.”

The Taq Kasra was built from between the third and sixth centuries and was in use during the reign of Persian King Khosrow I in the capital, Ctesiphon, or al-Madaein in Arabic. Also known as the Arch of Ctesiphon, the pre-Islamic structure is said to be the largest single-span, unreinforced brick vault arch in the world. The arch is 37 meters (121 feet) high and 26 meters wide (85 feet).

Legend holds that its wall cracked when the Prophet Muhammad was born in the sixth century, making it a sacred place for Muslims. Arabs seized it in 637 in the Battle of al-Qadisiyah against the Sasanian Empire of Persia. The structure achieved even greater status as a sacred site for Muslims after Salman the Persian, a companion of Muhammad, was buried a kilometer (half a mile) from the structure in 656. Salman the Persian ruled al-Madaein, the Arabic term for Ctesiphon, and his tomb became a large mosque. It is about 30 kilometers (19 miles) southeast of Baghdad near Salman Pak.

In recent years, Iran and Iraq have made moves to try to get the Taq Kasra listed as a World Heritage Site.

A UNESCO spokesman told the website Hyperallergic that four meters (13 feet) of the arch collapsed following heavy rains. A Culture Ministry spokesman told Al-Monitor that the part of the arch that fell had been repaired a few years ago.

Baghdad provincial council member Saad al-Muttalibi told Al-Monitor, “Iran perceives Taq Kasra as a part of its historical heritage. It believes it is entitled to the restoration and preservation of this special landmark along with Iraq.” He said, “Obviously, the relevant authorities in Baghdad have neglected any maintenance of the site, which resulted in the collapse of an important part of its roof. This is added to the overall poor infrastructure of the area.”

Laith Majeed Hussein, the chairman of the State Board of Antiquities and Heritage, told Al-Monitor, “Iraq is reaping the harvest of the years long administrative corruption and neglect of antiquities, particularly the Taq Kasra, the world’s largest brickwork, in al-Madaein.”

Hussein said, “The World Monuments Fund warned in 2004 that negligence would cause Taq Kasra to collapse.” He added, “The Czech company Everis announced in 2013 that rehabilitation works kicked off under a contract with [the State Board of Antiquities and Heritage], which involved stabilizing the foundations of the giant structure, managing the moisture and reinforcing Taq Kasra to prevent any of its parts’ collapse in the future. A sum of 3.5 billion dinars ($2.4 million) was allocated for the project.” He added, “Back then, the resident architect said the [State Board of Antiquities and Heritage] had received more than one Iranian initiative to rehabilitate the edifice and adjacent lands, which points at its remarkable interest in this landmark.”

He also said, “The shortcomings continued, and money was wasted on failed rehabilitation works, particularly since 90% of the allocated sum was spent on lab testing of the foundations, walls, moisture, etc., and the remaining 10% was spent on technical works.”

He added, “Former Iraqi Culture Minister Abdulamir Hamdani said in 2019 that Everis made many maintenance mistakes and subsequently was blacklisted. Later, he expressed a willingness to carry out joint Iranian-Iraqi maintenance projects for Taq Kasra.” Hamdani was nominated for the post by the pro-Iran Asaib Ahl al-Haq, or League of the Righteous, which obtains support from Tehran.

Hussein said that following the new damage to the arch, the Culture Ministry's new administration and the State Board of Antiquities and Heritage staff appealed to ALIPH — the International alliance for the protection of heritage in conflict areas — "to extend a helping hand and advice.” He said, “ALIPH dispatched a team of specialists that visited the site to conduct a damage assessment and prepare an overall study before embarking on immediate maintenance works." He said the team put up new scaffolding, and said the old scaffolding was inappropriate and also had been “stolen from the site.”

He said, “ALIPH will cover all expenses related to the future site maintenance by its team.”

Samia Ghallab, the head of the parliamentary Culture, Tourism and Antiquities Committee, told Al-Monitor, “The committee discussed Taq Kasra with the culture minister and [State Board of Antiquities and Heritage] chairman after its partial collapse two years ago. Subsequently, an inquiry committee was formed and found out that the company that was entrusted with the maintenance work fell short.”

ALIPH team member Karar Rawaziq told Al-Monitor, “More damage will be caused to the outdoor historical monuments, given the absence of guards and how the lack of significant maintenance and monitoring causes erosion. This is in addition to the crack in the Taq Kasra foundation, which poses a threat to this historical edifice that is surrounded by rubble and garbage.”

Rawaziq added, “This is not only the case of Taq Kasra; its conditions are similar to many of Iraq’s archaeological monuments. These have neither been invested in as tourist attractions that generate hard currency for Iraq and bring in the necessary funds for their reconstruction and rehabilitation, nor provided jobs, particularly to unemployed archaeologists and tourism institutes and college graduates.”