The ancient Lion of Babylon, Iraq’s national symbol, is critically threatened by erosion and neglect. 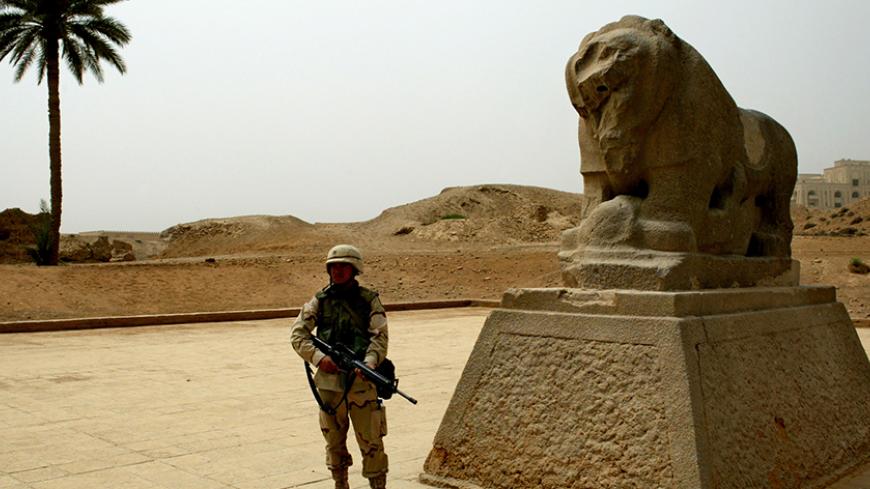 A US Marine poses for a picture next to a statue of a lion in the ancient town of Babylon, April 20, 2003. - REUTERS/Jerry Lampen

BABYLON, Iraq — The statue of the Lion of Babylon stands in the ancient city of Babylon, south of Baghdad, founded in 1880 B.C.

The statue was uncovered in 1876 by a German archaeological mission. Some initially suggested that the statue, more than 4,000 years old, was built by the Chaldean King Nebuchadnezzar II (605-562 B.C.), though others now believe it was a Hittite creation.

Its features have become misshapen, the black basalt is badly eroded by harsh climate conditions such as moisture, temperatures as high as 50 degrees Celsius, wind and strong sunlight. The statue, depicting a lion trampling a man, has also been badly damaged by people. There are many photos of tourists climbing on the lion’s back and groups of visitors standing on the statue.

Ahmad Hassan, a high school student, told Al-Monitor, “It is not unusual to see visitors climbing on the statue," adding that many of his schoolmates have taken pictures of themselves on the lion's back.

Hassan said, “They do not mean to harm the Lion of Babylon. They take pride in taking photos on the back of the lion. The way they express this pride is primitive and shows their lack of awareness of proper behavior around archaeological monuments. This is the result of a misguided culture that does not deal appropriately with archaeological treasures.”

On closer look at the two-meter (6.5-feet) statue, one can see holes and cracks in its structure. The damage is obvious, and the lion's ability to withstand its harsh environment is being tested.

On both sides of the statue, cracks are filled with white plaster, evidence of improper and unprofessional attempts to repair and preserve it. This practice is inconsistent with UNESCO’s guidelines on the preservation of archaeological ruins. Notably, former President Saddam Hussein included Babylon’s archaeological ruins in his development program. Saddam had some ruins in Babylon poorly reconstructed, to objections by UNESCO as harmful to Babylon's antiquities.

Hussein Falayeh, the director of Babylon's antiquities department, told Al-Monitor, “There are no rehabilitation projects at the moment for the Lion of Babylon. The department had reconstructed the statue’s platform to remedy the signs of erosion in a project funded by the World Monument Fund.”

Falayeh admitted that “visitors are committing some violations.” He added, “It is very painful to see visitors climbing over the lion, which shows a lack of awareness of the importance of this historical monument.”

He added, "The guards around the lion are unable to control the tourists flocking to the site.”

On the measures to stop these incidents, he said, "A 50-centimeter [1.6-feet] security barrier will be erected as part of the precautionary actions to prevent the recurrence of such incidents. Visitors will be prohibited from crossing the perimeter.”

Artist Shabib Midhaty told Al-Monitor, “It is necessary to preserve this statue given its artistic and historical value. The [inappropriate] repairs of the damages lessen the statue’s historical value.”

Midhaty said, “I visit the statue from time to time. I have noticed signs of weakness and erosion amid a lack of intervention by specialists to repair the damage. I have been watching the situation of the statue and I noticed that it has been neglected. Mechanisms must be developed to protect the statue. It must be placed inside a glass display case or other measures must be taken by archaeologists.”

He added, “There are numerous archaeological monuments in the world located in open areas, but they are subject to periodic inspections and receive due care. The Lion of Babylon is not receiving such care and interest.”

Archaeologist Hamid Hassan told Al-Monitor, “It is a national symbol that shows how great and strong Babylon is. It is a symbol of the history of Iraq.” He warned, “Salt poses an important threat to the statue as it has accumulated and reaches several centimeters on its platform, in addition to the effects of moisture.”

Hassan fears that this archaeological monument, a symbol of Babylon’s ancient power and the authority, will be ruined because of negligence.

For his part, Hassan Qammouneh, a member of Babylon’s provincial council, told Al-Monitor, “The ancient city of Babylon has been neglected for a long time now. The Lion of Babylon could suffer heavy damages any minute now without tight control and security.”

He noted, “The footage seen in the media and social networks showing people climbing on the lion’s back, unaware of its value, is very unfortunate, especially as such incidents are still occurring.” He attributed the problem to the “decline of an archaeological culture” and urged the antiquities department to “take deterrent measures in this regard.”

Qammouneh suggested the prioritization of a “program to restore Babylon’s archaeological sites and turn them into modern tourist facilities, as this will provide funds to develop archaeological projects and excavations in Babylon, instead of waiting for the necessary funds from the federal budget in light of the economic crisis in Iraq due to the costs of the war on terror and the drop in oil prices.”