After the al-Ahwar marshes were added this year, Iraqis are looking to add the ancient city of Babylon to the World Heritage list in 2017, in a process that requires much effort given the current challenges the historical site faces. 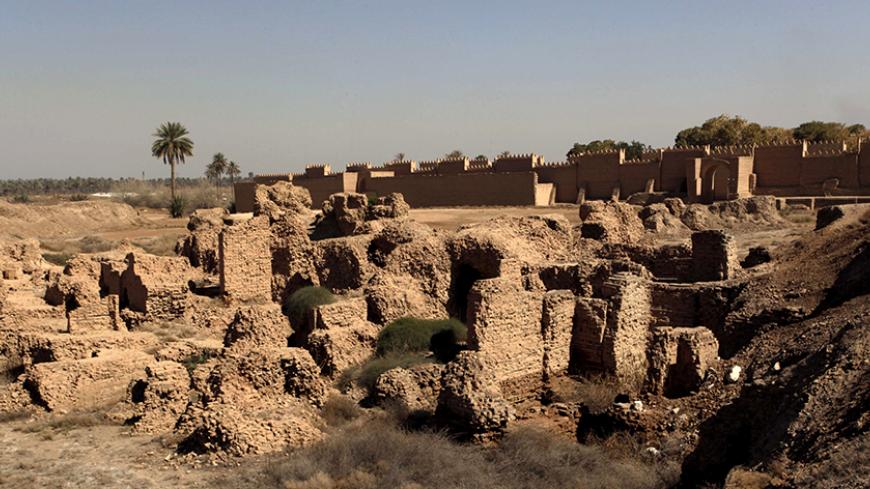 Ruins of the ancient city of Babylon are seen near Hilla, south of Baghdad, Feb. 28, 2015. - REUTERS/Alaa Al-Marjani

BABIL, Iraq — On July 17, UNESCO added al-Ahwar marshes in southeastern Iraq to the World Heritage list. Now, Iraq is seeking to add the 4,000-year-old city of Babylon to the list, which includes world heritage properties of special cultural and natural significance.

Hussein Fleih, Babylon’s director of antiquities and member of Babil’s provincial council, told Al-Monitor, “Babylon will be competing to earn that recognition in the voting process supervised by UNESCO for 2017.” He said that naming Babylon a World Heritage site will help to preserve this historical city by drawing not only local but international financial and technical support.

In an interview with Al-Monitor, Fleih said, “Both the local government in Babil and the Iraqi government are working toward adding the city to the World Heritage list.”

In an expression of popular demand for adding Babylon to the UNESCO list, a group of journalists and activists launched a social media campaign June 20 under the hashtag #WeAreBabylon.

Journalist and activist Wissam al-Tai told Al-Monitor, “The Saddam Hussein regime was unfair to Babylon with investments that served a political agenda. In 1983, Hussein built a huge and luxurious palace on top of a high hill there. Ignoring the resulting damage to the historic city, Saddam further constructed artificial hills and lakes within the historic site to immortalize his name. The campaign aims to protect this historical city from negligence and ensure more financial allocations to preserve it.”

However, Fleih argued that these wishes for universal recognition of Babylon as a World Heritage site “face many challenges, especially haphazard maintenance operations that modified the city’s original features.”

Regarding the ongoing preparations for nominating the city for the World Heritage list, Fleih said, “One of the weaknesses is the high level of groundwater, as UNESCO requires reducing it to a minimum so it doesn’t affect the original building, leading to its deterioration.”

He added, “We must also maintain the Ishtar Gate, whose pillars suffer from groundwater and mineral exposure. Moreover, the cracked walls of the temples require restoration, the internal wall should be rebuilt and all extraneous additions removed. We should maintain the Lion of Babylon statue, preserve it and remove all the factors influencing the erosion of its legs.

“One of the first practical preparations for nominating Babylon was the arrival of UNESCO experts in 2015 to the site. They issued guidelines as to the reinforcement of the buildings to prevent their collapse. These experts also presented a study documenting the results of the work underway. In light of this study, it will be decided whether Babylon will be added to the World Heritage list.

Fleih said, “There’s still a lot of hard work to be done before the voting in 2017. UNESCO specified further conditions, such as bringing the city back to the borders determined by the Iraqi antiquities law that was published in the Iraqi Waqai’e newspaper in 1935. This law forbids any encroachment on the city’s borders in a way that causes damage, especially by farmers who own land within the historic site’s borders. According to UNESCO laws, only crops of less than 10 centimeters [4 inches] in height are allowed on its sites. In the event where it proved impossible to stop agricultural work completely, the crops should at least be isolated from the monuments.”

He pointed out another dilemma, saying, “The resort was built during the era of the former regime and is also one of Saddam’s palaces. UNESCO specified that this resort should be either removed or turned into a museum and research center specializing in Babylon’s monuments and history. Meanwhile, the local government insists on keeping this touristic project for investment, hindering the efforts aimed at listing Babylon as a World Heritage site.”

He said, however, that it appears that it will be moved. “The department of antiquities won the lawsuit filed against the Oil Ministry in April. The pipeline will soon be moved to a location outside the historic site.”

The city of Babylon, universally known as the capital of the ancient world, deserves more care and attention from all the UNESCO member states. These countries should fill the technical gap Iraq suffers from to restore this city, as well as send excavation and maintenance teams to uncover what still lies in its realms.