The city of Hillah was built a thousand years ago using bricks scavenged from the ruins of Babylon, and the practice of reusing the ancient building materials continues there to this day. 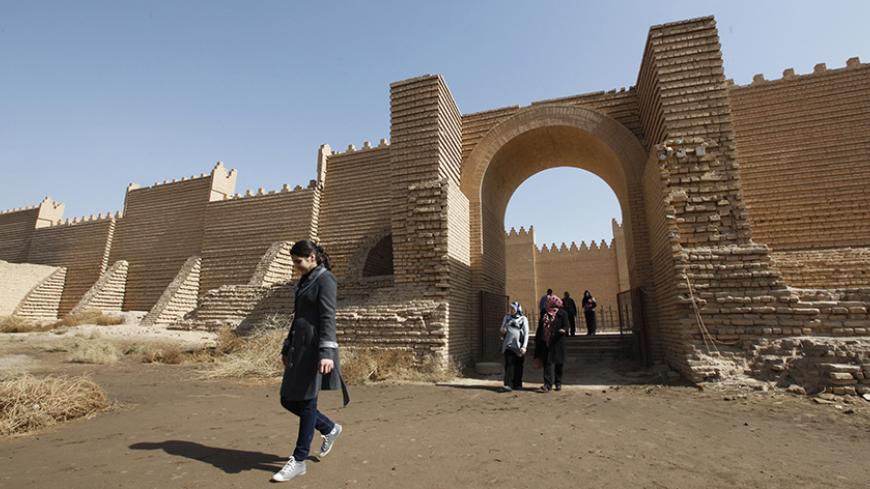 BAGHDAD — Every now and then Iraqis are surprised to find out that some of the new buildings in the city of Hillah, south of Baghdad, are still being built with antique bricks stolen over the past century from the ancient city of Babylon.

Mohammed al-Hilli, a 75-year-old stonemason from Hillah, told Al-Monitor, “We often find authentic Babylonian brick while demolishing dilapidated houses.” He explained, “During the 1950s, it was very common to transport bricks from the city of Babil to be used in housing construction. But this has stopped following the tightened security measures and increasing interest by the authorities in the city.”

Hilli went on, “In old neighborhoods, mainly Mahallat al-Jami’in, al-Kaoud neighborhood and Tais, one can still find Babylonian bricks that were brought here by our ancestors on animals to use in construction.”

Other elderly locals said that the city of Hillah used to have a wall built with bricks from Babylon that were transported to the city via primitive river barges.

Hilli’s accounts are also in line with the findings of Adnan Bahia, a researcher at Akkad Cultural College. His research dates Hillah's construction with ancient Babylon bricks to 1101.

Al-Monitor visited the ancient city of Babylon Dec. 2. The city's ancient edifices are built with porous bricks very similar to those used in the contemporary buildings, making it difficult to identify the stolen bricks.

According to historical accounts, King Nebuchadnezzar II built the city of Babylon using 15 million baked bricks in the construction of his palace and other official buildings. The bricks were cut into squares and embossed with Sumerian characters and special seals.

Many treasures of the ancient city of Babylon have been stolen. Research published in Baqer Yasin's 1991 book, "The history of bloody violence in Iraq," indicates that the Hindiya Barrage was built in 1890 with bricks from Babylon, including other large bricks taken from Nebuchadnezzar's palace in historic Babylon when it was blown up with dynamite.

The harm to Iraq’s cultural heritage has continued in the form of vandalism, sometimes at the hands of the authorities.

In a 1988 bid to immortalize his name, former Iraqi President Saddam Hussein ordered maintenance work in the city that was not compliant with the standards of UNESCO, using different materials from the original ones. Saddam had his name inscribed on the sand-colored bricks used to rebuild the walls of the ancient city. One frequently used inscription read, “From Nebuchadnezzar to Saddam Hussein.” As a result, UNESCO recommended against the inclusion of the ancient city of Babylon on its World Heritage List.

Following the fall of Hussein in 2003, the historic city became a camp for US troops, and tanks blemished its ancient streets.

Sarwa Abdel Wahed, a member of the parliamentary Culture and Media Committee, told Al-Monitor that she calls “upon all government archaeological and antiquity bodies to swiftly intervene to oversee the old houses and other heritage sites in the city, especially in Hillah, where some buildings have been constructed using the ruins of Babylon.”

She went on, “The authorities ought to act immediately, as many bricks with Sumerian inscriptions are found in the ruins of the houses. These historic pieces ought to be recovered and stored in museums.”

Some, however, dispute that brick theft is still a problem today. Hussein Falih, director of the governmental Babel Antiques Organization, told Al-Monitor, “Today, Babylon is under considerable security measures. The theft of bricks that used to take place in the 1920s and 1940s is over.”

Falih noted a need to monitor the demolitions of old houses in Hillah so the ancient bricks can be recovered. “The rehabilitation process of Babylon’s historic buildings has come a long way in removing the modern bricks laid by the former regime during the restoration process, and renovation is now underway according to UNESCO's specifications,” he said.

Falih seemed optimistic that the city would be included on the World Heritage List at the end of 2017.

On June 21, a group of journalists and activists created a social media campaign called “We Are Babylon” to urge UNESCO to include the archaeological site of Babylon in the World Heritage List.

Abbas al-Gaim, an activist with an interest in the history of Babylon, told Al-Monitor, “The people of Hillah realize the importance of preserving the archaeological sites of Babylon. Most of them rush to hand over archaeological pieces to the authorities when they find them.”

The head of the Federation of Authors and Writers in Babylon, Jabbar al-Kawaz, told Al-Monitor, “There are cultural events that raise awareness on the importance of heritage. …​ Hillah’s old houses have a [special] heritage and historical significance and value because some of them contain Babylonian bricks with Sumerian inscriptions.”

“This is why the restoration process of these houses should take place under the control of the General Authority for Iraqi Antiquities,” he said.