After Babylon, Borsippa has its eye on World Heritage List

The ancient city of Borsippa in the south of Iraq incorporates religious and historical relics and is hoping to be inscribed on the UNESCO World Heritage List. 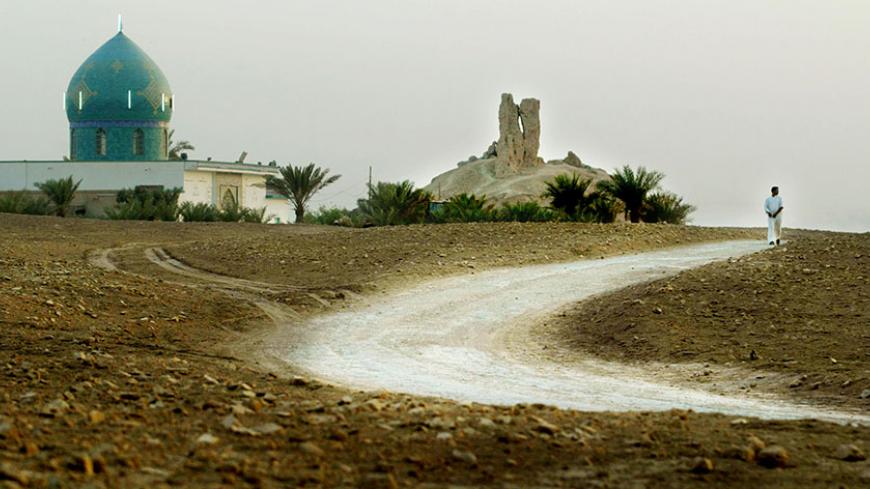 A man walks down a road in the shadow of a Mesopotamian ziggurat (C) and a shrine to the Prophet Abraham (L) in Borsippa, Iraq, June 8, 2003. - Mario Tama/Getty Images

BABIL, Iraq — As preparations continue to have Babylon recognized by the UNESCO World Heritage List in 2017, the city of Borsippa, which is 25 kilometers (15 miles) from the ruins of the ancient city of Babylon, is on the top of the list of archaeological sites that are most likely to be inscribed on the world list, as the city has not witnessed any construction changes beyond UNESCO specifications.

The city has not had a face-lift for thousands of years, Hussein Falih, the director of the archaeological site, told Al-Monitor. “The Department of Antiquities in Babil governorate is careful not to make any change that would reduce the historical value of the site and is keen on intensifying security measures and protection,” Falih said.

“Working on inscribing Borsippa to the World Heritage List requires efforts to preserve the archaeological hills of the city that also include valuable relics that have yet to be excavated. The city’s high tower should also be sustained in a scientific manner to prevent its collapse without changing its original structure. We ought also to embark on a media campaign to promote this ancient archaeological site,” Falih added.

If the city of Babylon is a historical attraction for tourists, Borsippa combines both historical and mythological aspects. It is commonly believed that “the city witnessed the clash between the Prophet Ibrahim [Abraham] and the pagan King Nimrod, according to religious narratives,” Haytham al-Yasiri, a cleric from Babylon, told Al-Monitor. “Given the historical and religious tourism, Borsippa has outstripped Babylon in terms of the numbers of visitors,” Yasiri added.

Those who arrive at the site notice that it is divided into two parts. First, there is the plateau where a large mosque stands surrounded by orchards and is topped with a 10-meter-high (32-foot) green minaret.

“The mosque was built under a cave, where it is said that Prophet Ibrahim was hidden when he was born, after King Nimrod’s clerics and priests had ordered him to be killed, as they thought he would be a danger to the king when he comes of age,” Yasiri said.

The second part of the city is visible 1 kilometer into the flat land — the archaeological hill, where a ziggurat rises 47 meters (154 feet) above the ground. According to Yasiri, “The ziggurat served as a pyre set by King Nimrod to burn the Prophet Ibrahim.”

Hamid Sabar al-Fahdawi, who is interested and versed in archaeology and anthropology, told Al-Monitor, “The ziggurat at the bottom of the tower was the temple of the god Nabu, who was the patron god of the city of Babylon, which is seen as a pagan symbol. On the opposite side, one can see another temple, which serves as the shrine of Prophet Ibrahim, which indicates the multiculturalism of the city’s people.”

The ziggurat is topped by two massive and narrow walls rising 12.5 meters (41 feet) into the sky. According to Fahdawi, “Historical sources confirm that they are the remains of the Tower of Babel (Babylon), which was mentioned in Genesis. It was said that King Nimrod built the tower to fight his god from a high altitude.”

He added, “Regardless of the different interpretations, some people view the Tower of Babylon as a realistic fact. The rest of Borsippa symbols are interpreted the same way, where mythology is mixed with history.

Al-Monitor visited the hill with film director Hussein Ali, who is currently making a documentary on the archaeological site as part of the promotional media preparations to add Borsippa to the World Heritage list.

“According to archaeologists, who shared their input in the documentary, the site has very high chances to be inscribed to the list, as all the revamping works done to the city were in accordance to UNESCO standards,” Ali said.

Visitors were swarming to the site for religious and archaeological tourism. Saad al-Husseini, a teacher from Babylon, told Al-Monitor that he was “visiting the site to see the historic monuments that existed during the time of Prophet Ibrahim.”

In fact, most visitors come for religious purposes, visiting the Borsippa hill only to rush to Ibrahim’s temple through the low plain.

It appears that no major excavation work has been done at the site since the work of the first exploration led by German archaeologist Robert Koldewey in 1902. The most recent excavations were carried out in the city in 1990 by an Austrian mission.

Unfortunately, Borsippa has not escaped illegal excavation work, which is visible by the dozens of pits dug by smugglers on the site.

The archaeological site also lacks some services and advanced protection systems against natural conditions, such as wind and soil erosion due to rain, which has caused some relics to emerge in the hills in March 2016. The relic police have collected and delivered them to the National Museum. In December 2013, torrential rains also revealed 114 archaeological pieces at the site.

“There is a governmental plan to give many archaeological sites a face-lift, mainly the city of Borsippa, which was provided with the necessary security protection to prevent any illegal excavations in preparation to include it on the world list,” Falih said.

Including Borsippa on the World Heritage list would draw much attention to this historic monument and would allow UNESCO to support any future excavation works and protect it from its archaeological features being destroyed. However, what matters more is that Iraq will benefit from the expertise of international archaeologists at the site.