To celebrate spring, many Iraqis travel to the ziggurat of Dur-Kurigalzu, an ancient city, but they are noticing that the famous archaeological site is falling into ruin as the government is not making any effort to protect it. 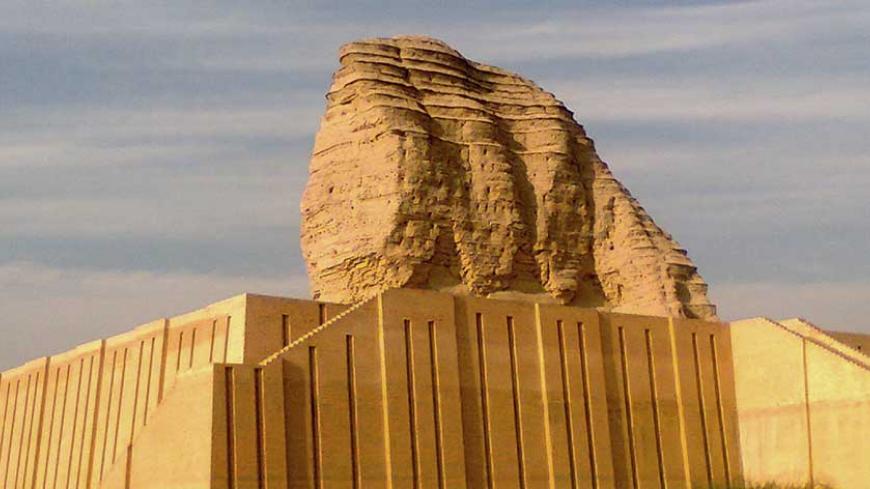 A view of the ziggurat of Dur-Kurigalzu, a city dating to 1400 B.C., northwest of Baghdad, in an image uploaded Aug. 21, 2016. - Facebook/مراقبية اثار عكركوف

BAGHDAD, Iraq – Every year on March 21, Iraqis gather around the ziggurat of Dur-Kurigalzu, the site of an ancient city dating to the 14th century B.C. that is located northwest of Baghdad, to celebrate Nowruz and the first day of spring. Residents from the city's various sects come together to celebrate ancient festivals near structures such as the ziggurat, built by King Kurigalzu, who ruled between 1438 and 1412 B.C. during the Kassites era in Iraq after the fall of the city of Babylon at the hands of the Hittites in 1595 B.C.

The celebration this year was sponsored by the United Nations Assistance Mission for Iraq in cooperation with Iraq's National Reconciliation Commission and was funded by the Dutch and German Foreign Ministries.

Artist Amal Khudair, who celebrated Nowruz in Dur-Kurigalzu, told Al-Monitor that the monument reminds Iraqis that Iraq has been home to glorious civilizations.

Archaeologist Hameed Sabar al-Fahdawi told Al-Monitor, “The ziggurat is particularly important because it is located in Abu Ghraib, an area tarnished by bloody sectarian conflicts." He said that celebrating an ancient festival next to it is a symbolical act that shows Iraqis are still united.

Meanwhile, Mazen Razouki, a member of the Baghdad Council's Antiquities and Tourism Committee, told Al-Monitor, “This place is particularly symbolic at the present time because it is an area of cultural contact that represents a promising touristic project. This is why the residents are keen on developing this idea and are calling for the need to reinforce security first so that exploration missions can start working here, especially since many of the archaeologists whom I have met told me that there are hundreds of artifacts buried in the plain surrounding the ziggurat.”

Despite the city’s historical importance, it has been neglected. The ziggurat, made of soft clay and palm branches, has been eroded over millenia by natural forces, Razouki noted. “It is at risk of disappearing if we fail to address the impact of erosion, rainwater and floods.”

He went on, “The parliament’s tourism committee warned of another imminent danger; residential neighborhoods were built too close to the ziggurat due to urban expansion, and as a result, it has been damaged by residents and grazing animals.”

He added, “We can only see ruins. No one is paying attention to the place and proof is the cracked walls around the ziggurat. Mold caused by humidity has affected up to one meter of the walls, which are now surrounded by thorns and wild plants.”

Razouki noted, "The ziggurat has never been sufficiently protected, especially after 2003, following the US invasion of Iraq. Control over archaeological areas was weakened due to the security chaos, and smugglers dug around it to steal the precious pieces buried in the sand.” He said protecting the ziggurat requires a sufficient budget that has never been provided, so it is unlikely to see any positive change under the current circumstances.

Dur-Kurigalzu’s archaeological monitoring department posted a picture on its Facebook page of the ziggurat from above, showing the total lack of tourism infrastructure in the surrounding area. People who visit the ziggurat can clearly see how rainwater and salts have caused cracks in the structure, while a lot of debris and trash can be seen all around the ziggurat. The Engineering Division of the Ministry of Culture conducted maintenance at the ziggurat in 2012 as part of the project “Baghdad, the Capital of Arab Culture for 2013.” However, there are no tourist facilities around the ziggurat to entice visitors.

Iyad al-Shammari rapporteur for the parliament’s tourism and antiquities committee, told Al-Monitor, “In order to develop the ziggurat and turn it into an archaeological site, security must be established,” noting that some isolated security incidents are still occurring in the area of Abu Ghraib, preventing tourists from visiting.

He said, “There is a plan to rehabilitate the place after completely stabilizing the security situation, and we have coordinated with the General Authority of Antiquities in this regard.”

One of the [committee’s] ambitious plans, according to Shammari, is to “ask the United Nations Educational, Scientific and Cultural Organization (UNESCO) for financial and technical support to complete restoration, since the government is undergoing a financial crisis and thus failing to allocate money for restoration works.”

Shammari added, “The plan includes bringing international companies specialized in the maintenance and protection of such sites to take care of restoration, in addition to contracting with exploration missions to extract the buried artifacts in the region.”

Shammari said, “The parliamentary committee’s ultimate goal is to turn Dur-Kurigalzu into a touristic destination by securing proper infrastructure and facilities for visitor.”

The ziggurat is only one of dozens of neglected archaeological sites waiting to be converted into archaeological and touristic projects that provide jobs and financial resources for Iraqis, help the economies of the cities where they are located and showcase Iraq's historical heritage to the world.