The historical city of Uruk in Iraq has been neglected by the government, as its monuments and artifacts are threatened by thieves and looting activities. 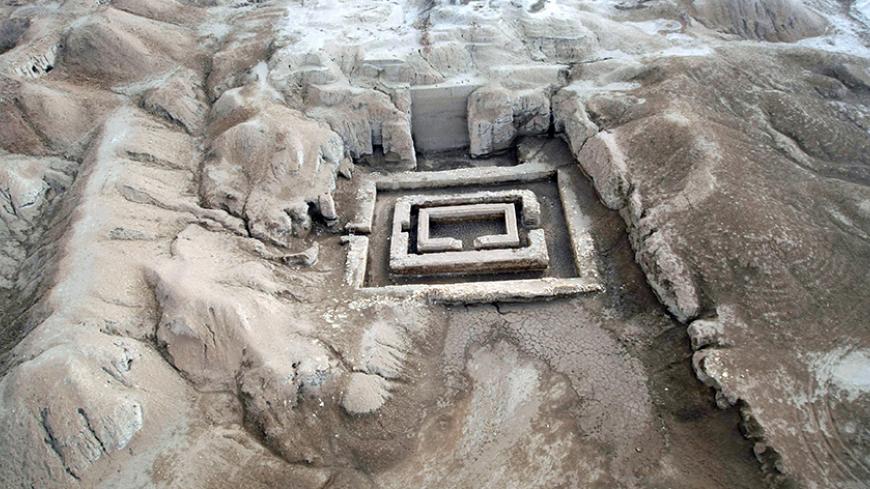 A picture shows the archaeological site of Uruk, which is renowned for its walls that were first built 4,700 years ago by the Sumerian King Gilgamesh, Iraq, Jan. 25, 2010. - GETTY IMAGES/Essam Al-Sudani

BAGHDAD — The current situation of archaeological sites in Iraq is saddening. These sites are neglected, abandoned, lack organized protection, and are covered by sand and exposed to tampering by modernists and thieves. Al-Monitor visited the city of Kish and the ancient city of Uruk where the situation was no different.

Uruk, known as Warka in the local Arabic dialect, lies in Muthanna governorate in southern Iraq, 270 kilometers (168 miles) south of Baghdad. This city was built in the fifth millennium B.C. and witnessed the emergence of the famous epic of Gilgamesh, its hero and king. Such a glorious past could make Uruk a great source of antiquities and research, yet its current situation is a story of neglect.

Since the discovery of the city in 1849 by British archaeologist William Loftus and the excavations by German missions in the 1970s, no archaeological expert has examined the site, which remains to date deprived of urbanization methods and services.

Al-Monitor visited the site in June and found that the ancient city of Uruk is nothing but soil structures, remains of building foundations and walls penetrated by the wind. It is a deserted area, with no administrative organization allowing its introduction to the public, and no water and electricity services.

Ahmed al-Zawalm, a local farmer, told Al-Monitor that he grew up in Uruk. He said, "I only came near this site once in the 1990s when some guests wanted to visit the place. There is no point in visiting this site that shelters forces of evil, harbors demons and witnesses every now and then supernatural phenomena."

The most prominent archaeological monument is a massive rectangular structure with a sign that reads, "Ziggurat of Ur, built by King Ur-Nammu founder of the Third Dynasty of Ur, a place of worship." In fact, this monument looked more like a pile of sand and rocks.

Most archaeological sites in Iraq are located in the desert and in agricultural areas where farmers and their families live, far from the city centers, making them vulnerable to thieves. The city of Uruk lacks security services, and only one guard, Mehr, has been residing there with his family since the 1970s.

Mehr told Al-Monitor, "I guard the site with my child and with the help of my family. We have grown used to it ever since I was appointed as a guard here in 1975. I still guard this site although I am retired now."

Mehr is one of the few security guards whom the Iraqi Ministry of Antiquities has appointed. According to the security committee of the Dhi Qar provincial council, guards are accused of assisting thieves excavate historical sites and stealing artifacts.

Mehr said, pointing to a weapon on his shoulder, "I only have this weapon to guard the site from thieves who sneak into the area to carry out excavation works [to steal antiquities].”

Mehr is proud to have been able with his family to save the site from illegal excavation works, indicating in this respect that the headquarters of the German mission that excavated the site back in the 1970s has been left untouched.

The German mission began excavations in Uruk in 1973-74, where it found clay tablets on which the Epic of Gilgamesh, the legendary god, was inscribed. The Pergamon Museum in Berlin, which held a special exhibition in 2013 on the history of Uruk, has some of these tablets on display.

Mehr showed the workshop of the German mission, where dusty files were piled up as well as hundreds of artifacts in baskets and excavation tools.

Not far from the site, the railway tracks built by the Germans still hold the rusty carts that were used to transport debris. Now, they’re nothing but a pile of junk.

Many of Iraq's historical sites only employ one or two guards, as the excavation works in the country ended decades ago because of the various wars.

Shawan Daoudi, a member of parliament and member of the Iraqi Parliamentary Culture Committee, told Al-Monitor, "The Iraqi parliament called on the government to take extraordinary measures to preserve the Iraqi archaeological sites, most notably Uruk."

Iraqi Minister of Tourism and Antiquities Liwa Smaisim had admitted in a press statement in 2013 to the neglect of Uruk, promising a contingency plan to save the city.

Ahmed al-Khafaji, an academic from the Hospitality and Tourism Institute who worked in the antiquities department in Babil for about 20 years before retiring in 2002, told Al-Monitor that this plan has yet to materialize. “The minister’s promises have yet to be achieved and Uruk has remained unchanged just like most of the archaeological areas of Iraq that suffer not only from neglect but also lack protection," he said.

To the question of what might be the solution, Khafaji replied, "The solution is to facilitate private sector investments and to draw up contracts with international excavation missions to salvage buried monuments."

The reputation of the ancient city of Uruk became world news in 2003, following the looting of a rare archaeological object from the National Museum of Iraq in Baghdad. This artifact, called the Mask of Uruk, dates back to 3100 B.C., and was discovered in 1938 and represents the face of the goddess Inanna, or one of her priestesses.

Archaeological researcher Hassan Hamza, who closely follows the situation at Uruk and collects information on the geology of the region, pointed to the wall and told Al-Monitor during a private tour, "This wall that contains black bricks is the remains of the Akitu Temple. Excavations uncovered the foundations of the Akitu Temple where religious ceremonies were held."

Five hundred meters (0.3 miles) from the ziggurat, there is a deep well whose walls are padded with bricks and which has remained in tact for thousands of years.

Awsaf al-Zalimi, head of the Committee of Tourism, Culture and Antiquities at the Muthanna provincial council, told Al-Monitor, "The most important achievement in preserving the archaeological monuments of Uruk was their inclusion on the list of World Heritage Sites in April 2015."

But this achievement will only be complete when the premises are rehabilitated, archaeological monuments are extracted and the site is turned into a tourist attraction, to provide the funds for excavation and development activities.