Can tourism be revived in ancient Iraqi city?

Iraqis living near the ancient city of Nuffar say the site should be developed to attract tourism after years of official neglect. 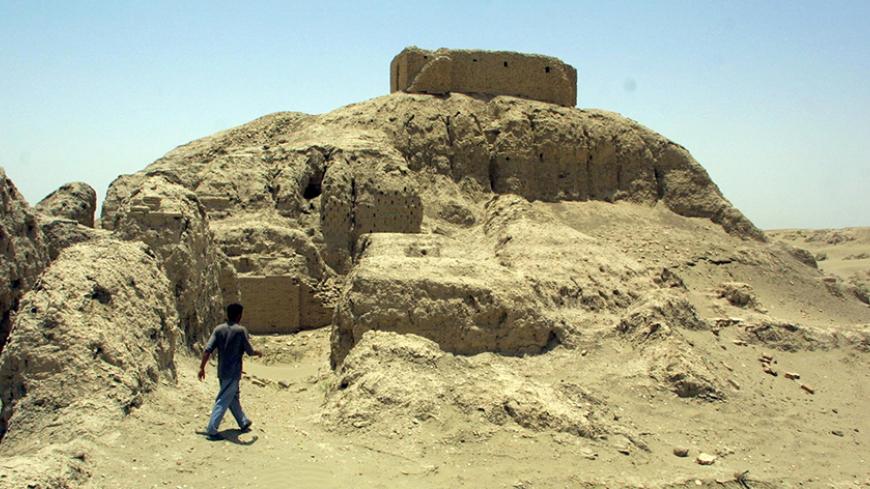 Sand covers the ruins at Nuffar, a jewel of Iraq's glorious past that lies southeast of Baghdad, in this photo taken July 9, 2003. - AHMAD AL-RUBAYE/AFP/Getty Images

AL-DIWANIYAH, Iraq — The ancient city of Nuffar, just south of al-Diwaniyah City near Baghdad, dates back to 2500 B.C. Nuffar (or Nippur) was a holy city to the ancient Iraqis of the Sumerian and Babylonian civilizations.

Yet the city is not holy to Abbas al-Yassiri, 70, who resides in a village in the Afak district near the ancient city. He told Al-Monitor what's left of Nuffar is “mere ruins of a city that was punished by God for the rampant corruption there.”

His opinion is no different from that of some contemporary Muslims and sects such as Tawhid, which reject the glorification of pre-Islamic archaeological sites and civilizations, including the city of Nuffar, because they belong to civilizations that practiced polytheistic religions, such as the Pharaonic civilization in Egypt and the Sumerian and Babylonian civilizations in Iraq.

Yassiri said the site “is a source of black magic and evil." He added, "Interestingly, ancient Iraqis considered Nuffar a blessed piece of land that was dropped from heaven by the Euphrates, which divided the city into two parts.”

Al-Monitor communicated with Hamza Genahee, a historian and sociologist who resides a short distance from the site. He spoke to Al-Monitor about the so-called religious capital of the Sumerians and Babylonians. He explained, “The Mesopotamian people worshiped Enlil [the god of wind]. They believed that he took this piece of land as a seat. Offerings were made to Enlil, and religious ceremonies were held at the ziggurat, a massive structure that is part of temples.”

Genahee pointed to the religious and political importance of the city, saying its “name was mentioned in the Epic of Gilgamesh. Inscriptions were found in this city indicating that its inhabitants were reading and writing early on in history.”

Al-Monitor made a visit to the Nuffar site. On the approach by car, the ziggurat was visible as a high mound in a vast plain of sand dunes. To get there, it was necessary to walk on an unpaved road for nearly 20 kilometers (12 miles). The extent of neglect by the authorities concerned with archaeology is obvious at the site, once the most important in ancient Iraq. It was a seat of a god who granted royal titles to rulers of this ancient land.

Closer to the ancient city center, the details of the ziggurat gradually became clearer. Part of a landscape covered by the dust of time, it was a conical hill similar to a terraced step pyramid with a large base and a peak rising to a height of 20 meters, which we climbed from the eastern side.

The ziggurat, now damaged by wind and rain, was built under the rule of King Ur-Nammu, the founder of the third dynasty of Ur (2050 B.C.).

A tour at the site winds on dirt pathways between the mounds formed by sand accumulation over time. No excavations of them have been conducted yet, and their treasures are unknown. These pathways are covered with sand and surrounded by the tall grass and bushes of the desert, further evidence of long neglect. Some excavation activities were conducted in 1889 here by an expedition from the University of Pennsylvania.

In his report about historic libraries, historian Kazem Abdullah included this city in the most ancient libraries in history.

There are no security measures to protect the site. There is not even a tourist guide to explain the monuments. Mohammad Sultani, a resident of the neighboring Afak district, volunteered to guide us.

Sultani pointed at holes in the mounds, saying they were caused by illegal excavations carried out by gangs and thieves living in the neighboring areas. He said many artifacts have been stolen from the areas that were not legally excavated.

He added, “Some residents of the neighboring areas are trading looted antiquities from the site.” He added, “Security threats and tribal ties make it hard to prevent trading stolen antiquities and to notify the authorities.”

Al-Monitor continued the tour and reached a low area between the mounds. Sultani said, “It is the old course of the Euphrates, which flowed through the city before its water receded as the years went by to become a dry riverbed."

The Temple of Enlil, marked by an old sign, is a square structure just three meters (10 feet) long. Nothing is left of it but crumbling walls.

The Ministry of Tourism and Antiquities has no plans to rehabilitate the site. However, on Oct. 30, 2010, there were news reports that the ministry had allocated 3.5 billion Iraqi dinars ($3.1 million) to rehabilitate the city of Nuffar. The ministry has also organized an annual cultural festival in al-Diwaniyah since 2010 that puts on plays, screens documentaries and hosts art exhibits.

Shwan Daoudi, a member of the Culture Committee of the Iraqi parliament, told Al-Monitor, “The rehabilitation of archaeological sites is a slow [process] due to negligence that was aggravated by the financial crisis. This is caused by the lower oil prices, which will affect future projects in most archaeological sites.”

This negligence was also evident in the warning issued by the University of Al-Qadisiyah on May 28, 2013, of the possible “collapse of the ziggurat at the Nuffar site, after a water leak led to the collapse of large parts of it.”

In light of the financial crisis, Essam Alwan, a retired tourism worker who participated in the rehabilitation projects for Baylon’s antiquities in the 1980s, told Al-Monitor, “It is necessary to turn archaeological areas into profitable touristic and cultural areas that will provide funds for rehabilitation activities.”

He called for the private sector to take the initiative after the successive governments have failed to achieve any progress in this field.