Iraq poised for ambitious plan after Babylon listed by UNESCO

Baghdad lobbied for more than three decades to get Babylon on UNESCO World Heritage List, but the way ahead may be even more difficult. 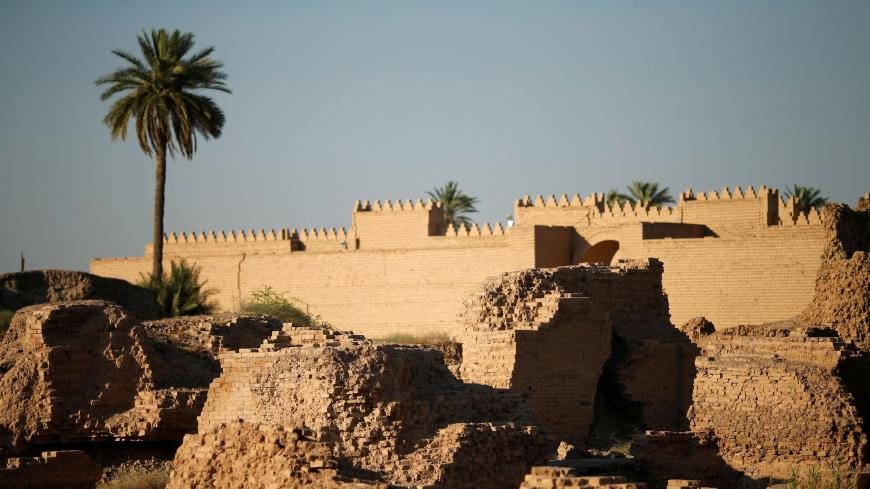 After 36 years of lobbying by Iraq, the ancient Mesopotamian city of Babylon was designated in July a UNESCO World Heritage Site. But this may mean even harder work for Baghdad and the local administration, which now have to implement a tough plan for the management and protection of the site that was the seat of successive empires under rulers such as Hammurabi and Nebuchadnezzar.

“Now that the city has been included on [the UNESCO list], there are several key projects that need to be carried out,” said Qahtan al-Abeed, the Iraqi coordinator for UNESCO, the United Nation's cultural arm, and head of the team that prepared the Babylon file for UNESCO. He told Al-Monitor, “Most importantly, [we need to] document the damage of archaeological sites and start rehabilitation in line with international collaboration.”

"The city's association with one of the seven wonders of the ancient world — the Hanging Gardens — has also inspired artistic, popular and religious culture on a global scale,” said a UNESCO statement announcing the decision after the UN body’s meeting in Azerbaijan on July 5.

UNESCO also warned that the site is in an "extremely vulnerable condition" and in need of urgent conservation. “The property suffers from a variety of threats including illegal constructions, trash dumping and burning, small-scale industrial pollution, urban encroachments and other environmental factors. At the time of inscription, and despite conservation efforts undertaken since 2008 with international collaboration, the general physical fabric of the site is in a critical condition and lacks a well-defined and programmed approach towards conservation,” it continued.

“Saddam’s palace is likely to be turned into a museum to be part of the city’s landmarks,” Abeed, who will supervise the projects and direct the museum, said. After the Gulf War, Saddam Hussein built an extravagant modern palace for himself on the ruins, overlooking the main site. Earlier, at the height of the Iran-Iraq War, Saddam had channelled large sums of money building replicas of the ancient palaces, which was mocked by the international media as “Saddam’s battle with Nebuchadnezzar.”

In 2015, the British Museum warned that US-led coalition forces were causing severe damage to the ancient city, saying that 2,600-year-old paving stones had been crushed by tanks.

Abeed explained that two major projects were to be of top priority in the coming days. One is a project supporting the walls of various temples, including the Ninmah Temple, a relic of the 6th century B.C. whose walls were reconstructed during the 1980s by Saddam, and restoring al-Mawkab street, known as the Processional Way. The second one is to provide a strong security system of the underground oil pipeline — by introducing valves that would control the flow before the oil enters the line under the archaeological center — until the controversial pipelines are closed and moved outside the site.

The gas and oil pipelines that have been under the historical city have long been a controversial issue — and a barrier to Babylon’s inscription on UNESCO's World Heritage List. In 2013, UNESCO sent a letter to Baghdad, expressing concern that the drilling for the pipeline caused damage to the Ishtar Gate and the Processional Way.

The closure of the pipeline is only one item on the long list of requirements from the UN’s cultural arm. “Listing Babylon as a World Heritage Site came as a result of strenuous efforts that have been ongoing for decades. Since 2015, UNESCO experts have been making visits to [Babylon] to make sure the committee’s requirements and conditions have been met [before they inscribed it on the World Heritage List],” Fleih said. “All maintenance works that do not comply with UNESCO’s standards were halted so that we would not alter the original relics.”

Bassem al-Zamli, spokesman for the Ministry of Culture, Tourism and Antiquities, told Al-Monitor, “In order to meet UNESCO’s recommendations, several issues need to be addressed — such as the issue of the urban sprawl on the city’s outskirts. Residents [in the historical area] will be compensated and resettled elsewhere.”

He noted that there would be a new project to expand the scope of excavations, which are likely to end up with more archaeological discoveries. Archaeological experts believe that 70% of the ancient site is still not excavated.

Zamli explained the lobbying process and what took so long to have the city inscribed on the prestigious list. “One of the major obstacles that had prevented this Mesopotamian metropolis from being listed as a World Heritage Site was the fact that late Iraqi President Saddam Hussein built a massive palace inside the ancient area in 1983. He also built colossal hills and industrial lakes and had his name inscribed on the city’s walls and edifices,” Fleih said.

Abeed noted that the modern constructions within the city of Babylon — the presidential palace, restaurants and houses — obscured the original archaeological buildings but some of them, such as Saddam's palace, had become part of its political history. "This was understood by UNESCO and therefore [did not affect] the positive decision [to include Babylon on he list]," he said.

Ahlam al-Rashid, a member of the Babil provincial council, told Al-Monitor that it took a while to carry out the UNESCO-requested renovations in Babylon because of the financial crisis “that had crippled the country as a result of the war on the Islamic State.”

“The local administration is keen on undertaking vital projects to meet UNESCO’s conditions,” he said. “One of them is that we do not use the area as a military base or for other military purposes. [We will ensure the security of the site] via modern surveillance techniques and through the police and security forces."

Rashid added, “The administration will also get rid of [some of the recent] structures and will allocate about 64 billion dinars [$53 million] to give the city a face-lift.”

Zamli said that Babylon was also nominated as the capital of Arab tourism in 2021 during the Arab Tourism Meeting held in Cairo, which is likely to attract more tourists to the city.

“We will also be working on reopening the Culture Ministry’s Al-Hadarah TV channel that was closed down in 2015. Once it is back on air again, we will introduce the city to the world through documentaries and short features as well as live footage from the heritage sites,” he added.

Iraq has six sites inscribed on UNESCO's World Heritage List. Three years ago, the Ahwar of Southern Iraq — also known as the Iraqi Marshlands — were named a World Heritage Site. The country is currently working on getting its water wheels on the banks of the Euphrates River on the list.