As urbanization is expanding in Iraq, construction companies are not taking into account the country's rich heritage and archaeological history, as historical landmarks are destroyed and replaced by modern buildings. 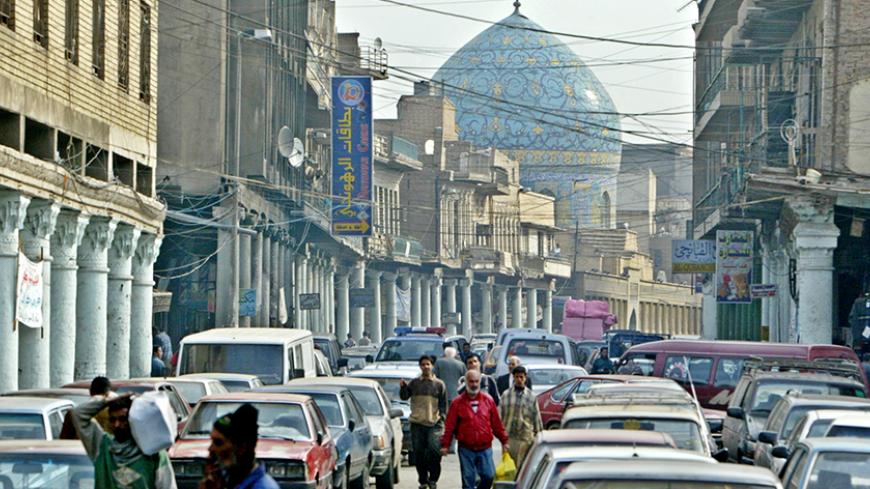 Iraqis walk down al-Rashid Street in Baghdad, Jan. 2, 2005. Al-Rashid Street, the once vibrant heart of the city, has been in sad decline for decades, its intellectual life choked by repression, its cafes and stores strangled by war and sanctions. - REUTERS/Faleh Kheiber

BAGHDAD — Ali al-Khafaji inherited in 2014 an old house in the old city of Hillah, in Babil province, 120 kilometers (74 miles) south of Baghdad. The house dates back to the Ottoman era in Iraq (1532-1918); its official documents indicate that it was built in 1905. However, the building's history did not deter Khafaji from destroying the house in February 2015, along with its traditional wooden windows and decorated walls that were engraved with religious phrases by skilled craftsmen who are hard to find these days.

In an interview with Al-Monitor, Khafaji discussed the reason for destroying the property. He said, “It is located on a street with shops and so I could profit from that. No one stopped me from destroying it [and replacing it with a shop], because it is my property. Even the municipality did not offer to buy it from me despite its great cultural importance.”

He added, “Had I believed it would have made a good profit, I would have restored the house."

Khafaji, like many Iraqi citizens, does not care much for the significance of properties’ cultural heritage and laws that are not enforced, such as the Antiquities and Heritage Law No. 55 of 2002. The law stipulates that “preserving the antiquity and heritage in the Republic of Iraq is a substantial aspect of the national wealth.” This law, however, did not stop Khafaji from destroying the house or changing its characteristics.

Wrecking balls have demolished many important cultural landmarks in Iraq. Amer Abdullah, an architect who works at the Hillah municipality, told Al-Monitor, “This law is not preventing the demolition of historical houses and markets in Baghdad and other cities.”

Abdullah blames not only citizens, but also academics and architecture firms. He said, “Most architectural design firms seek a profit despite their professional and academic affiliations. Instead of preserving beautiful cultural heritage sites, they decorate modern buildings with glamorous texture mapping techniques, such as plastic facades and huge billboards.”

He added, “Under the pretense of modernizing architecture, [traditional] Iraqi architecture is being destroyed."

Iraqi cities have been witnessing since the 1970s a chaotic urban transformation that is not in line with the national architecture policy protected by the law.

Mazen Razouki, head of the Committee of Tourism and Antiquities in the Baghdad Provincial Council, said in a news statement in December 2014 that houses of cultural significance in Baghdad have been inundated or burned by their owners, to sell them at exorbitant prices to developers. The owners and buyers thus legally destroy these traditional properties claiming they have cracks in the walls and are on the verge of collapse.

The head of the Board of Trustees of the Iraqi Media Network, Ali al-Shalah, told Al-Monitor, “National standard specifications have changed. This prompted [Iraq’s] General Authority for Antiquities [and Museums] to ask the government and parliament to draft strict laws to prevent the demolition of cultural heritage and archaeological sites.” The main focus is to preserve the Arab and Islamic character of buildings.

In regard to the practical steps to preserve cultural heritage, Shalah said, “The Babylon House for Culture, Arts and Media had moved its headquarters into a building dating back to the late 19th century after it was restored. The house was rebuilt exactly as it used to be.”

The director general of the General Authority for Antiquities, Fawziya Mahdi, said in a news statement in September 2014 that Law No. 55 states, “Whoever destroys a building of cultural importance without the [General] Authority’s knowledge or approval shall be sentenced to six years in prison and the building shall be reconstructed as it used to be.” The law, however, was never implemented due to the US invasion in 2003.

Qais Hassan Rashid, head of the General Authority for Antiquities, reported in September 2014 some disheartening figures: 3,600 cultural landmarks were subjected to demolition in different parts of Iraq (no dates were given).

Baghdad's al-Rashid Street, which dates to 1916, has lost its historic landmarks to modern buildings. In al-Naher Street, which dates back to the later Abbasid period (1055-1258), stores in the market have supplanted the traditional archaeological features of the buildings. The traditional facades of the buildings on Sadoun Street in Baghdad have been replaced with modern ones, and the ancient Bataween neighborhood in Baghdad, known for its ornamented balconies, has been destroyed. The buildings in al-Haydar Khana region in Baghdad, famous for their unique shapes, have also been destroyed, and the famous cafes in al-Shawaka neighborhood in the Karkh district in Baghdad are no longer there. Since the urbanization of the 1990s, the historical landmarks in Baghdad have slowly disappeared.

In 2014, the Ashtar Theater, which dates back roughly 87 years, was destroyed. Modern construction and unregulated business expansion also threaten cultural landmarks in Najaf (160 kilometers, or 99 miles, south of Baghdad), such as the Najaf historical market. Many large buildings have been erected in Hillah's al-Jamain quarter, which dates to the year 1100 and consists of a number of old neighborhoods and traditional houses with elaborate decorations.

Bahaa Hussein al-Saadi, a graphic designer and professor at the University of Babylon, follows up on the developments of modern architecture in Iraq. He told Al-Monitor, “Design and construction companies only seek profits, without caring about traditional aesthetic standards and about the loss of important buildings that are of cultural significance.”

Saadi said, “Laws need enforcing to put an end to the chaotic urban sprawl." He fiercely criticized “the destruction and removal of cultural landmarks instead of restoring them and recreating their original characteristics.”

Should this destruction of the Iraqi cities’ traditional identity continue, they will turn into major identical residential complexes, without any traditional features, turning citizens into consumers who are emotionally detached from their surroundings.