Iraq’s historical landmarks are being destroyed and replaced by modern structures, as the government and municipalities fail to adopt measures that protect the country’s architectural heritage. 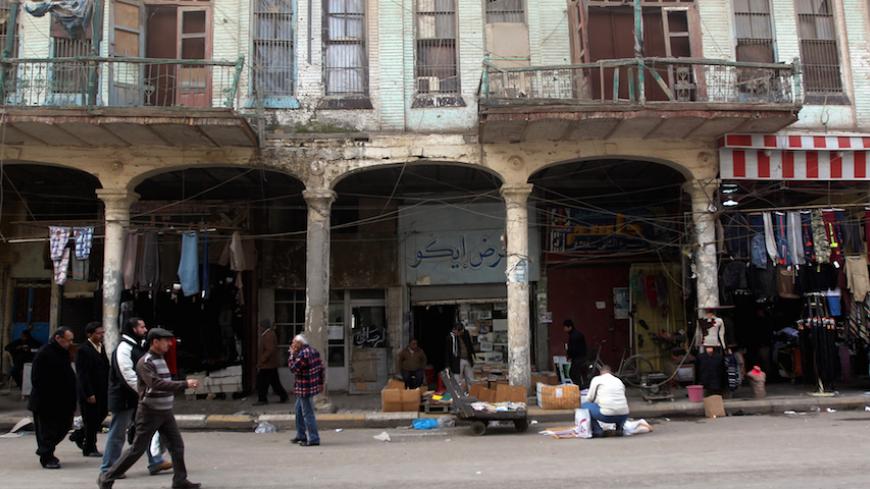 Iraqis walk past a traditional building in the oldest alley of the capital Baghdad on Dec. 13, 2013. - AHMAD AL-RUBAYE/AFP/Getty Images

BABIL, Iraq — As soon as merchant Ali Hussein had finished erecting his store at Najaf's "Big Market," 160 kilometers (99 miles) south of Baghdad, construction and decoration experts recommended that he cover the front with colored plastic decorative cladding. This reflects the new and popular phenomenon permeating modern building practices in Najaf, and leading to the old market losing its architectural heritage, with most of its commercial properties undergoing chaotic renovation.

Hussein told Al-Monitor of his acquiescence to the experts' advice by saying that the new architectural design style “adds elegance and a modern feel to the place, which attracts customers.”

The Jame’en neighborhood of Hillah’s old center in Babil governorate, 100 kilometers (62 miles) south of Baghdad, is renowned for its alleys crowded with 200-year-old dwellings adorned with traditional decorations and rococo balconies. But the steady spread of new architectural trends has changed the spirit of this ancient neighborhood, leaving but a few of its traditional houses still intact.

The fate of Hillah has been echoed in most Iraqi cities, where the demolition of old traditional neighborhoods with ancient houses and edifices has become commonplace, despite protective laws and the wave of harsh criticism aimed at the new trend.

Architectural researcher Ali Thuwaini told Asharq al-Awsat in December 2014 with regret that hundreds of traditional homes have been demolished and replaced by modern-looking cladding made of aluminum and plastic imported from countries such as Turkey and Germany. This architectural style is now referred to by Iraqis as the “cobond,” a term now known to even those unfamiliar with architectural matters — a building style that Iraq’s Al-Ittihad newspaper described as “architectural cancer.” 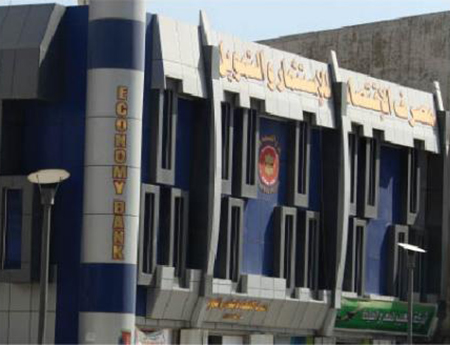 An example of the cobond architecture style

University of Babylon scholar and sociologist Hamza al-Kuraishi told Al-Monitor, “Most Iraqis lack proper knowledge about restoration techniques. Buildings are neglected for dozens of years, and all of a sudden they are demolished and replaced by new ones. Iraq lacks an artistic or architectural authority able to set standards. In addition, municipalities do not adopt stringent requirements for the construction of new buildings. Laws protecting architectural heritage do exist but are ineffective and not adhered to.”

Heritage landmarks adorned with decorations, stars and rococo balconies were mercilessly razed from Iraqi cities as a result of unregulated destruction practices. For instance, in 2014, the 87-year-old Ishtar Theater was demolished and replaced by modern buildings with contemporary facades.

Regarding this criticism, decoration technician Adnan Hussein, owner of the Adnan Bureau for Design and Decor in the west Hamza neighborhood south of Hillah, described “cobond” sheets as “thin panels of flexible aluminum used on building facades.” Hussein seemed unconcerned with the call to preserve Iraqi heritage and maintain its historic character. He told Al-Monitor, “Preserving heritage landmarks is not the responsibility of my bureau.” He opined that the popularity of “cobond” panels was possibly because of it being “low cost, easy to affix and with the capability of giving buildings aesthetic appeal through the use of eye-catching colors.”

In an interview with Al-Monitor, civil engineer Jameel Mozan focused on the positive aspects of the new facade cladding technology, which is easy to “clean and maintain.” He said, “The ‘cobond’ technique has become prevalent in many countries of the world, because it offers effective solutions to the problems of pollution and the accumulation of dirt on building facades.”

Interestingly, to maintain Baghdad’s architectural style, and despite the popularity of the “cobond” technique, the municipality of Baghdad banned its use on ministry buildings, government offices and buildings overlooking main streets.

Criticism of this phenomenon is increasing in the media and in cultural circles. The editor of Iraq’s Al-Sabah newspaper, Qasim Mozan, told Al-Monitor, “Baghdad suffers from visual chaos.” He described his city as “one that, until very recently, was among the most beautiful in the Orient, where Western and Muslim classical architectural art co-mingled.”

Mozan attributed the visual chaos to “random construction and the failure to implement technical controls and provisions, preventing the destruction of heritage landmarks.”

In an interview with Al-Monitor, journalist Salam Zeidan blamed the demise of heritage landmarks in Iraqi cities on “the municipality of Baghdad and the Ministry of Tourism, which lack a clear plan for building the capital and maintaining its heritage. The heritage of Iraq, and Baghdad in particular, is subjected to neglect and destruction.”

In this regard, engineer and author Lamis Kadhum told Al-Monitor, “Baghdad suffers from visual pollution.” He indicated the presence of “poor architectural management, chaotic building practices and a lack of coordination in the use of colors on buildings, and in streets and parks.” He added, “Dirt and electrical wires that extend aboveground contribute to this pollution.”

Many of those concerned with Baghdad’s heritage and architecture believe that thousands of heritage landmarks are threatened by practices that can only be abated through effective governmental measures and penalties against those who violate laws and regulations that protect Iraq’s historical cultural icons.