Antiques dealers in Egypt are rushing to recover the old doors of buildings that are being demolished as part of an urban development plan. 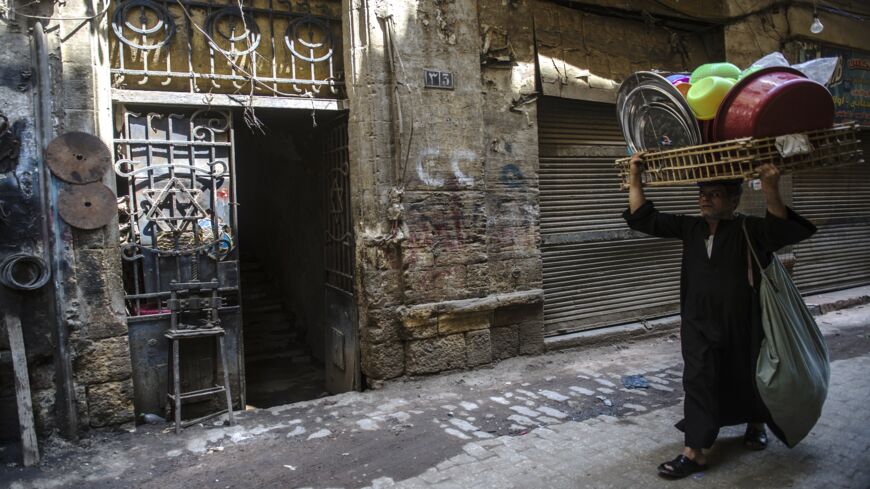 A man walks carrying dishes past a Star of David decorating the door of a home in the Jewish quarter of the Egyptian capital, Cairo, on June 25, 2015. - KHALED DESOUKI/AFP via Getty Images

CAIRO — In the Maadi suburb of Cairo, antiques dealer Mohammad Ahmed Abu Bakr displays a collection of artistically unique doors, windows and house furniture dating back to past centuries, in addition to decorative food trays.

Abu Bakr tells Al-Monitor that for the past 30 years he has taken a keen interest in collecting old doors and special furniture pieces from destroyed houses in Cairo or outside of the capital to save them from loss, wear and tear. But he gradually shifted to trade when some people expressed their desire to buy what he collected.

He noted that most of the old doors were made more than 70 years ago. Owners of houses in the past competed over the beauty of the house architecture, whether the engravings in the interior or the outer facades and doors. He noted that the doors are procured by brokers known as antiques collectors from Upper Egypt cities or old Cairo neighborhoods that were destroyed.

Abu Bakr headed to Arab al-Yassar neighborhood in Cairo where properties are being removed as part of a development plan to remove slums in the Sayeda Aisha area. He noted that the area includes important architectural designs that are part of Egyptian history and which should not be destroyed; rather, they should be renovated and preserved, he said.

He said when the doors are brought in they are washed with water to remove the sand, then they are left to dry in the open air. Later, he thinks of how to invest in them depending on the client’s request. He said all of his clients are foreigners or residents of modern residential compounds who love and appreciate antiques.

The Sayeda Aisha area in Cairo houses one of the biggest markets for used goods and antiques in Egypt. A group of specialized traders sell everything old — be that doors, old windows or seats. The average price of old doors amounts to about 10,000 Egyptian pounds ($640), according to Ahmad Sayed, an antiques trader in the Sayeda Aisha market.

Sayed told Al-Monitor that traders or brokers visit the owners of houses before the houses are destroyed to examine them and determine the furniture, multicolored windows, doors, and marble with beautiful and unique designs that will be purchased. They then sell the pieces to market traders who work on repairing them and selling them at special prices, depending on their shape, quality and date of fabrication.

Sayeh said, “Selling old furniture and doors has entered into business in the past years, and it has become significantly popular.” He said only old goods rather than heritage pieces are being brought in and sold.

Islamist researcher Muaz Lafi said old doors among other pieces of furniture are part of Egypt’s history because they date back to the 19th and 20th centuries.

Lafi said the artistic designs of the doors reflect the period during which they were manufactured. Some doors are made using a European Art Deco design, while others adopt a modern Islamic design. They must be viewed as part of Egyptian heritage and treated like any other antique, as they were part of houses that are around 100 years old, he continued.

He said the government considers some old houses with unique architectural character, and which are above 100 years, like any other buildings rather than a piece of heritage. Consequently, they are at risk of being demolished.

Abdul Rahim Raihan, director-general of Archaeological Research, Studies and Scientific Publications in the South Sinai antiquity areas at the Ministry of Tourism and Antiquities, told Al-Monitor, “Old furniture and doors are taken from buildings that are not subject to the provisions of Law No. 144 of 2006, regulating the demolition of non-derelict monuments and preserving architectural heritage, and its amended version from 2020, which prohibits demolition or annexation to buildings and structures that have a special architectural character.

Raihan told Al-Monitor that old buildings, their content and all architectural characteristics are considered to have special architectural designs that must be conserved as heritage rather than sold or destroyed just because they are not registered.

He said old houses face problems with registration due to the absence of a specific legal mechanism that forces each governorate to track and register old buildings. As a result, many houses that have a special artistic character and moveable antiques like doors, paintings or furniture are lost. Owners of antiques are interested only in the financial returns of the land sale, and they resort to demolishing old properties without considering their historical or archaeological value, he added.

Raihan asserted that continuing to demolish old houses will lead to the loss of important and unique heritage that is part of the identity of Egyptian civilization.

He called for forming a committee in every governorate to detect and register old houses and preserve them from destruction.

According to Raihan, what sets apart old houses and furniture is that they are handmade and unparalleled. They are thus displayed on the market as artistic pieces, and owners of castles or antiques traders inside and outside Egypt buy them, he said.

Raihan said the optimal solution to preserve movable antiques of old houses, like doors, windows and furniture, is to collect them and put them on display in each Egyptian governorate to shed light on the identity and heritage of each governorate through its unique architectural elements.